THE ANNOUNCEMENT of a coalition trio uniting Robert Fico, Vladimír Mečiar and Ján Slota hit a nerve with the Slovak currency, which immediately weakened by 15 hellers following the news on June 28. Market watchers expected the crown to continue to lose strength as investors digested what such a government might mean for Slovakia's surging economy. 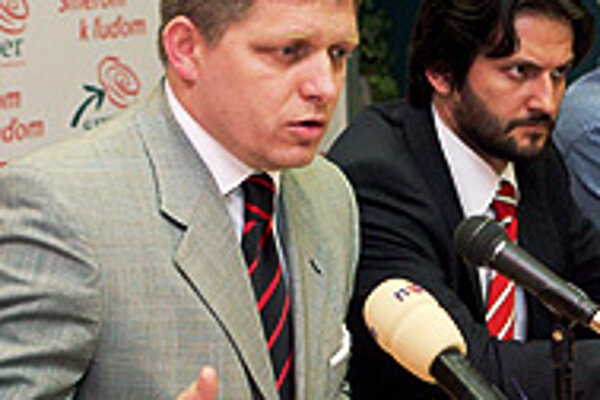 Font size:A-|A+
THE ANNOUNCEMENT of a coalition trio uniting Robert Fico, Vladimír Mečiar and Ján Slota hit a nerve with the Slovak currency, which immediately weakened by 15 hellers following the news on June 28. Market watchers expected the crown to continue to lose strength as investors digested what such a government might mean for Slovakia's surging economy.

The coalition between the socialist Smer, the far-right Slovak National Party (SNS) and the Movement for a Democratic Slovakia (HZDS), which led the country to the verge of international isolation between 1994 and 1998, had been seen by the markets as the worst-case scenario for Slovakia's next government.

In particular, the markets feared that such a coalition could pour cold water on Slovakia's "economic miracle" of over 6 percent GDP growth by undoing economic reforms and delaying entry to the eurozone, scheduled for 2009.

Smer has been unclear about whether it intends to meet the deadline, saying that while it still intends to honour it, it might postpone adoption of the euro if it was causing any pain for Slovak citizens.

"Even though Smer formally suggests that meeting the Maastricht criteria [macro-economic standards for adopting the euro] is still on the agenda, this could be part of its 'damage control' approach. We believe that the euro will be delayed to 2012, as 2010 is an election year, and 2011 is problematic, since EU authorities would need to judge whether Slovakia met the Maastricht criteria in 2010," said ING Bank Chief Economist Ján Tóth.

Tóth said that while the economy is in a very strong position at the moment, providing a buffer of an estimated extra Sk7 billion (€83 million) for next year's budget, meeting Smer's election promises could cost over Sk20 billion (1.1 percent of GDP).

"Its [Smer's] most costly pledge is to cut the VAT rate from 19 percent to 5 percent on selected items such as food, healthcare products and books (Sk15 billion). Additional promises to cut healthcare fees but increase overall spending, together with agricultural subsidies, extra Christmas pensions, highways and education could mean an additional Sk10-12 billion," Tóth told The Slovak Spectator.

The analyst said that while Smer could reduce the size of the second, capitalization pillar of the pension system to reduce the pension deficit and use VAT tax rates to administratively lower headline inflation, this might not be acceptable to EU authorities.

"Interest rates are likely to increase by 200 basis points in the next 12 months. The size of the hikes depends especially on when the central bank stops conducting its monetary policy according to the euro 2009 schedule. The later the bank stops the practice, the more hikes we will see," Tóth said.

As for the currency, the ING chief economist predicted that the forex market would test the central bank's intervention levels.

"We believe the [NBS] will protect Slovak crown losses this side of 39 [SKK to EUR] since it formally lacks an argument for leaving the 2009 euro framework in place. We are changing our end-of-year forecast to 39 from 37, as in 2006 and 2007 the country's strong fundamentals will still provide some protection for the currency," Tóth concluded.

"The central bank will intervene as long as it is within its power, which means as long as it has sufficient forex reserves. The effects of any intervention, however, only last for a limited time. The NBS will probably intervene several times to keep the crown within the plus/minus 15 percent band around the central parity [that was set in November 2005 when Slovakia entered the ERMII mechanism for euro adoption candidates - ed. note]. If the crown continues to weaken, there is a real chance it will simply drop out of this band," Šmál told The Slovak Spectator.

Šmál also said he believed that a Smer-HZDS-SNS coalition spelled trouble for the euro adoption.

According to Šmál, "if the Slovak crown deviates from the set [plus/minus 15 percent] band, and if there is no likelihood that inflation will be reduced or that the budget deficit will be contained, it will be increasingly difficult to meet the euro adoption criteria".

However, some Smer officials have been trying to soften their rhetoric and reassure the markets about the party's intentions, especially on such proposals as raising taxes on people who earn more than a million crowns a year, or slapping extra taxes on corporate dividends, monopolies, banks and financial institutions.

"Everyone remembers times when we paid 40 percent tax, and we really don't want to go in that direction. We have proposed increasing the tax ceiling for individuals from 19 to 25 percent, but it hasn't been decided yet. We considered starting the increase with annual incomes exceeding Sk1 million (€26,149), but maybe it would be more effective to increase the tax rate starting at Sk600,000. It all depends on how [political] negotiations go, because it's clear that we won't be able to form a government on our own," Smer Deputy Chairman Robert Kaliňák told The Slovak Spectator in an earlier interview.

Kaliňák added that the party might keep the tax rate at the current 19-percent for corporate and legal entities, and if it is proven that this rate improves tax collection, the party would be willing to discuss further options.

"So as far as the business environment is concerned, we don't want to make changes there," Kaliňák said.