The Slovak Spectator (TSS): What method did you use when collecting the documentary/video works on the theme?
David Rych (DR): We tried to include whatever we could get hold of, except for fictional mainstream movie productions, since they are widely accessible. We also tried to find productions which show a more contemporary "realistic" description of what the actual situation of different minorities is. There are also films that were produced by members of the documented groups. 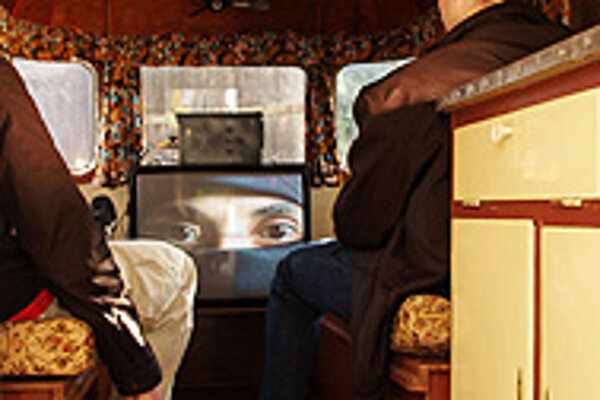 The Slovak Spectator (TSS): What method did you use when collecting the documentary/video works on the theme?

David Rych (DR): We tried to include whatever we could get hold of, except for fictional mainstream movie productions, since they are widely accessible. We also tried to find productions which show a more contemporary "realistic" description of what the actual situation of different minorities is. There are also films that were produced by members of the documented groups.

Emanuel Danesch (ED): As for other marginalised groups that have been the focus of investigation and familiarisation, the Roma have been repeatedly depicted by others. Therefore, it was important for us to differentiate between represented and self-representing authors.

TSS: You've collected works on Roma from eight European countries. How do they differ from country to county?

ED: The differences are endless. The work's author mainly determined the difference - in some cases, the films reflect a specific national feature, a condition of the Roma community in a particular country. Others depict the Roma as a homogenous group.

DR: There is one, almost journal-report, made by a Roma in a rural village using a small handy-cam. There are films that talk about pogroms in Romania, or Roma being victims of war. Others picture the Roma as progressive and adaptive inhabitants of urban shantytowns, as well as struggling with paperwork in the united Europe.

So the image of these people oscillates between traditional villagers to the most contemporary citizens of Europe, who are being deported because of expired visas.

TSS: Europe is about joining these days. In what ways do you see this happening in terms of the Roma?

DR: With the expansion of the EU, the national identity is being remodelled and human rights are in question. New laws are being enacted but have not yet been implemented. It becomes obvious that the Roma community continues to represent a deprived group even in an inter-European context.

TSS: How might viewing the collective films of Roma living in several different countries help a particular state's majority to better understand the community?

ED: We cannot give a general answer to this question. It's important to understand that the community is linked to the so-called dominant culture and vice versa. Minorities are part of the dominant culture and every form of segregation is a quixotic attempt to maintain an outdated model of society.

DR: With the wide range of the collected films, we intended to juxtapose a variety of views, representations and translations, with the intention to soften existing stereotypes.

TSS: What is it you wanted to specifically point to, influence or change with the project?

ED: Our project is an attempt to bring underrepresented topics into public discussion. We see that a small group of people makes decisions about what will get onto the screen and marginalized groups are hardly among the active participators in the process.

A project like this does not really have an enormous impact but a multiplicity of similar projects could cause an effect. In our opinion, art has to reflect on its time and communicate with its surrounding. We are very interested in crossing over into other disciplines, such as anthropology and ethnology.

DR: Also, being filmmakers ourselves, we are inspired by many of these films and we hope that other people will be too. So, expect more socially aware films in future.

To view the films screened at the Minority Logbox caravan, go to Nestroyhof at Neshoyplatz 1, Vienna. The works of all artists that participated at the Küba - Journey Against Mainstream can be seen there until September 9.