AFTER eight years of centre-right government under Mikuláš Dzurinda, Slovakia saw a changing of the guard on July 4 as a new "red-brown" cabinet consisting of Robert Fico's socialist Smer and the far-right Slovak National Party ceremonially took office. 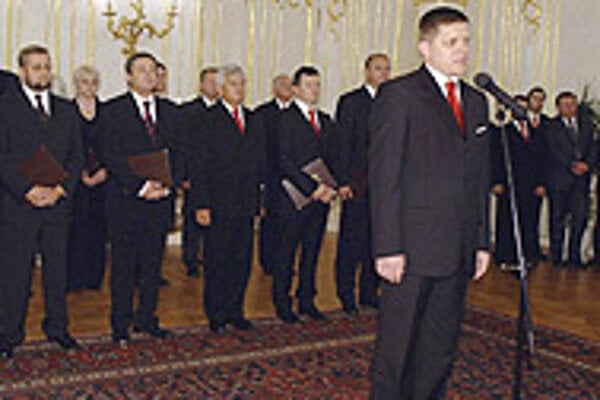 Fico, whose government also includes the internationally ostracised Movement for a Democratic Slovakia (HZDS), marked the occasion by promising that he would not alter Slovakia's course towards adoption of the euro in 2009, as financial markets had feared.

"I fully realize how important it is for Slovakia to adhere to the Maastricht criteria [for euro adoption]," Fico said after being designated the country's new prime minister.

"Solidarity, social justice, and an economically effective state will be the basic pillars of the new government programme."

President Ivan Gašparovič said he believed the new cabinet would do everything possible to ensure "that Slovakia continues to have a good name in the world, and that its citizens like their country because they enjoy freedom and the rule of law, and because their lives are improving from one day to the next".

From the outset, however, the doubters were clearly in the majority, both at home and abroad.

In a particularly embarrassing reversal for Fico, the Party of European Socialists (PES), the socialist faction in the European Parliament, have called for temporarily suspending Smer for cooperating with the SNS, ahead of possibly expelling the party after the summer recess.

PES President Poul Nyrup Rasmussen had sent an open letter to Fico after the coalition with the SNS and HZDS was announced, stating that: "The make-up of the ruling coalition raises a lot of concerns regarding protection for human rights, especially the rights of ethnic minorities, as well as commitments to democracy, the EU, and European values and policies."

Fico travelled to Brussels to meet his European colleagues in person on July 5, but failed to reverse the suspension.

The SNS is considered a part of Europe's ugly extremist fringe for its anti-Hungarian and anti-Roma statements, many of which have come from the mouth of party leader Ján Slota.

Slota, who holds no official post in the new government or the parliament, in 1999 urged Slovaks to "get in our tanks and go flatten Budapest". In 1995 he also proposed "a long whip and a small courtyard" as the best way of dealing with Slovakia's Roma population.

The centre-right European People's Party also expressed concerns over the presence of the SNS in the Slovak coalition cabinet.

EPP Chairman Hans-Gert Pöttering said he was "astonished that the most extreme xenophobic party should be part of the next Slovak government".

The chorus of international disapproval even before the government had properly taken its seats showed that the road ahead for Fico would be complicated, analysts said.

"The first impressions [of the composition of the new coalition government] were indeed very bad, and the new Slovak cabinet will have to make strenuous efforts to overcome these fears," Juraj Marušiak, a political analyst with the Slovak Academy of Sciences, told The Slovak Spectator.

The new government, just as the previous Dzurinda cabinet, consists of 16 people of whom only one is a woman - Labour and Social Affairs Minister Viera Tomanová of Smer.

Smer, which gained nearly 30 percent in the June 17 general elections, dominates the cabinet with 11 seats compared to 3 for the SNS and 2 for the HZDS.

In an apparent attempt to blunt criticism of his new government from abroad, Fico chose an experienced and respected diplomat in Ján Kubiš as his new foreign minister.

"I am very glad that Kubiš will be the new head of Slovakia's diplomatic corps. He's an experienced diplomat with many years of experience. He's internationally known and recognized. In my opinion he's the best choice for the ministry," Kukan said.

However, the nomination of Smer's Dušan Čaplovič as the new deputy PM for EU affairs, human rights and minorities could be another problem in terms of minority rights. According to analyst Marušiak, Čaplovič is one of the leaders of Smer's nationalist wing.

The most problematic name on the list of new ministers is the new justice minister, Štefan Harabin, who served from 1998 to 2002 as chief justice of the Supreme Court. During that time he resisted the introduction of new court management procedures that aimed to reduce corruption in the distribution of court cases to judges.

Harabin was also involved in several court disputes with the Slovak media, and fought a running battle with the Justice Ministry in its effort to reform the country's judicial system.

Former Justice Minister Daniel Lipšic of the conservative Christian Democratic Movement (KDH) said that the decision to nominate Harabin as the new justice minister confirmed that the new government was essentially "communist".

Harabin was nominated to his post by the HZDS.

For markets and investors, the identity of the new finance minister was especially interesting, as this post is crucial to Slovakia's plan to introduce the euro in 2009.

Smer proposed IT expert and manager Ján Počiatek for the job, a man who has been the head of the Telenor Slovakia firm since 2001, but who has no reputation within the financial community.

Fico said that professionalism had been the main criteria in choosing the new ministers, and added that Počiatek as well as Smer nominee Ľubomír Vážny (Telecom and Transport Ministry) were well qualified for the jobs.

The Hungarian Coalition Party (SNS) expressed concern over the future of minority schooling, given that the new education minister is SNS candidate Ján Mikolaj.

"When [in the 1994-98 Mečiar government] the SNS had this post, Minister [Eva] Slavkovská destroyed virtually all the progress that had been achieved in minority education until then," said SMK Chairman Béla Bugár after meeting with Slovak President Ivan Gašparovič on June 30.

Gašparovič, who accepted Fico's proposed list of new ministers on July 3 without opposition, said he would personally ensure that the rights of ethnic minorities were protected.

In defence of the new Smer-SNS-HZDS government, the president also said it was pointless to draw up disaster scenarios, and called on the public, politicians and the media to give the new government time to prove itself.

"Let's give this government time to get things up and running and to start working," the president said.

Even members of the political opposition agreed to retract their claws for the time being.

"Personnel nominations have always been within the rights of coalition parties. Although we are still entitled to express some concerns, we really can't do anything but respect this situation," said KDH Chairman Pavol Hrušovský.

The key question that is being asked of Fico's government is whether it is stable enough, especially given the infamous volatility of Slota and Mečiar, to endure the full four-year term.

Many believe that the Smer-HZDS-SNS coalition will survive.

"There are certain risks, but no one can say what will happen," Marušiak said. "They could easily last the whole four years. Even during the previous Dzurinda government, which was politically homogenous, personal quarrels and disputes could not be avoided and eventually lead to the break-up of the government."

A continued risk to the stability of the new government, according to Marušiak, is the possibility that the HZDS "could at any time defect to another [right-wing] coalition". In his opinion the HZDS is by nature "somewhat more prone to forging partnerships with centre-right parties".

Outgoing PM Dzurinda tried to avert a Smer-SNS-HZDS coalition prior to its conception by calling on the SMK and KDH to join his Slovak Democratic and Christian Union in a right-wing government supported by the HZDS.

The effort failed due to the KDH's refusal to cooperate with the HZDS.

The future of Fico and his government thus "depends on how he manages these tensions as well as possible conflicts between the SNS and HZDS on the one hand, and persisting personal tensions between himself and HZDS leader Mečiar on the other," Marušiak said.