Trio of leaders to call shots in government 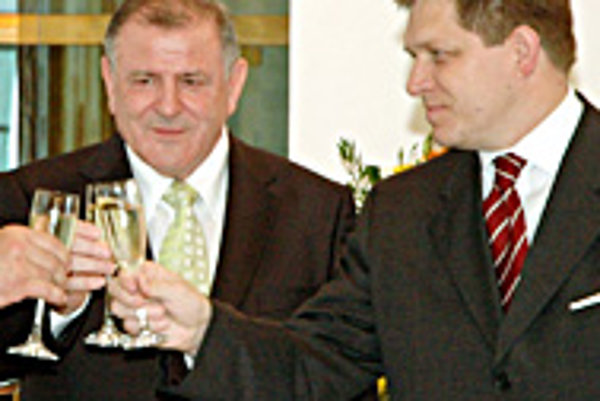 Robert Fico, Vladimír Mečiar and Ján Slota - the heads of the socialist Smer party, the Movement for a Democratic Slovakia (HZDS) and the far-right Slovak National Party (SNS), respectively - on July 2 became the sole members of the Coalition Council, the new government's top decision-making body.

The three men also signed a coalition agreement that formally underpins their cooperation in government following parliamentary elections on June 17, which were won by Smer with over 29 percent.

During almost two weeks of talks following the ballot, the country waited tensely to see if Fico would choose one or more of the right-wing parties of the outgoing Dzurinda government as coalition partners. The Smer-HZDS-SNS union, which has 85 mandates in the 150-seat parliament, was seen a worst-case scenario by most political analysts due to the unbridled nationalism of the SNS and Vladimír Mečiar's anti-democratic excesses in the 1990s.

The composition of the government's steering committee brought fresh criticism.

"All three ruling coalition parties are 'one-man-show' affairs," said Grigorij Mesežnikov, president of the Institute for Public Affairs, for The Slovak Spectator.

"Their leaders dominate proceedings in these parties, and they obviously wanted to extend this domination to internal coalition relations. Fico, Mečiar and Slota are notorious for their dislike of teamwork, and obviously felt that the participation of additional coalition party representatives would disturb them."

According to the new ruling coalition agreement, decisions will be taken as a consensus between the three men. In the case of a deadlock, the issue at hand will be given to teams of professionals to resolve.

Under the deal, internal conflicts will be concealed from the public, and until the wrinkles in cooperation are ironed out, the coalition resolves not to discuss its problems in the media.

Finally, the partners will consider any attempt by each other's MPs to pursue their own interests by voting with the political opposition as a violation of the deal.

Fico said the new coalition would rule Slovakia until 2010, and would work towards a more just distribution of the benefits of Slovakia's strong economic growth.

"We want to halt the decline in the standard of living of the majority of Slovak citizens," Fico said, adding several times that his coalition would also respect Slovakia's obligations towards the European Union, NATO and other international organisations.

Slota and Mečiar were clearly moved by the signing ceremony, with Slota calling the coalition agreement "a small step" for the three leaders but "a big step for the Slovak nation".

Mečiar's HZDS asked the media to give the party a chance to prove it wants to work for the good of Slovakia.

The local media have been comparing some of the features of the new ruling coalition to the one formed in 1994 uniting Mečiar, Slota and the boss of the Slovak Workers' Association, Ján Ľupták, who was known for his lack of political experience and tact.

That trio ruled the country until 1998, driving Slovakia towards international isolation before being itself driven from office by a political alliance led by Mikuláš Dzurinda. The HZDS-SNS-ZRS coalition also notoriously cancelled regular press conferences and refused to inform the public of its decisions.

"It is now clear that not only Mečiar and Slota but also Robert Fico with his mental-political outlook belongs to the previous century," Mesežnikov said.

While the new opposition parties said they would give the new government a chance to lead the country rather than condemning it out of hand, they expressed disappointment that another coalition arrangement had not been found. Pavol Kubovič of the Slovak Democratic and Christian Union (SDKÚ) told the TASR news wire he was disappointed that the Christian Democrats had rejected the option of a SDKÚ-KDH-SMK-HZDS coalition, which had been repeatedly floated by Dzurinda before Fico announced his government. The KDH steadfastly rejected working with Mečiar.

Former Finance Minister Ivan Mikloš also said he despaired that the SDKÚ, KDH and SMK, which are members of the European People's Party, had been unable to prevent the rise of the Smer-SNS-HZDS coalition.

"The stability of the coalition will depend on how good the three parties are at sharing power. This is an absolutely key issue, because the HZDS and the SNS, in their zeal to return to power, practically abandoned their programme priorities in favour of Smer's. For the moment they seem quite happy with this arrangement, since it is immensely better than what they had before," Mesežnikov said.

"Another element uniting this coalition could be the common strain of nationalism in all three parties, even though it varies in strength, and their isolationism towards Europe and the rest of the world. This will only grow within Smer due to the prospect of its being expelled from the Party of European Socialists."

Smer had its membership in the Party of European Socialists temporarily suspended on July 5 because of its cooperation with the far-right SNS.

According to Poul Nyrup Rasmussen, the head of the European socialists, the SNS is a "xenophobic and nationalist party" that European socialists cannot tolerate. Rasmussen warned Fico to think again about the composition of his government if he does not want to risk isolation in Europe, and said a formal decision on Smer's fate in the European Parliament will come after the summer recess.

On the other hand, Mesežnikov said, the unpredictability of Mečiar and Slota could prove a divisive element, while the government could also gradually come unstuck due to "its unpreparedness to manage the country, its desperate lack of professionals, its negative image abroad from the very beginning, its lack of ties to civil society, the acrimony in personal relations between the leaders, and the general opposition the government faces from the independent media and intellectuals."