FROM THE COMPOSITION of the Robert Fico cabinet, it looks as if the reputed sponsors of Fico's Smer party, controversial businessmen Juraj Široký and Vladimír Poór, may get a say in the new government's economic policy after all. 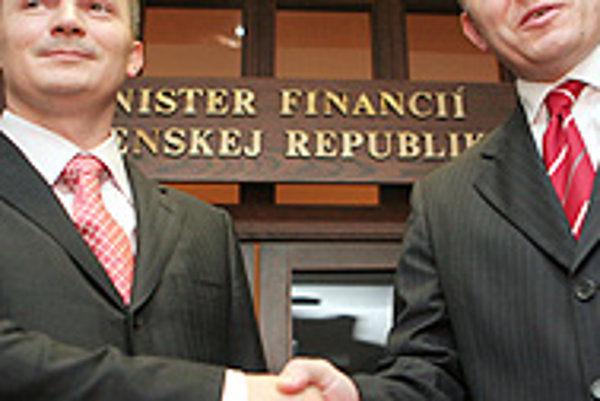 Font size:A-|A+  Comments disabled
FROM THE COMPOSITION of the Robert Fico cabinet, it looks as if the reputed sponsors of Fico's Smer party, controversial businessmen Juraj Široký and Vladimír Poór, may get a say in the new government's economic policy after all.

Široký worked with the Czech Harvard privatisation fund in the 1990s, where a police investigation of asset stripping continues, while Poór was taken into custody in 1999 for his role in the infamous 1996 sale of the Nafta Gbely gas firm.

While the Smer party has consistently denied any connection to either man, both the names on Smer's candidates list for the June 17 elections, as well as among the party's nominees for ministerial posts contain people with business ties to Poór and Široký.

For starters, the new Telecom and Transport Minister, Ľubomír Vážny, served as a board member and supervisory board chairman of the Biotika Slovenská Ľupča pharma firm from 1997 to 2003, where Vladimír Poór also had a board role. Vážny also served on the board of Nafta with Juraj Široký.

The Telecom and Transport Ministry is a key player in the economy, such as in regulating the telecom market and deciding how highway infrastructure funding gets divided up.

Economy Minister Ľubomír Jahnátek, meanwhile, was the director of plastics maker Plastika Nitra for over a decade and on its board of directors from 1992 to 2005. The firm is currently controlled by Široký, who has been on its board since 1996.

Jahnátek was also the managing director (konateľ) of the firm Privat Slovakia Marketing, which in 2002 allegedly received 100 million Czech crowns in Harvard Fund shares from a Cyprus-based company, according to a 2003 report by the Hospodárske noviny daily. The firm is owned by Plastika Nitra.

The Economy Ministry also wields enormous economic clout, governing the issue of business permits and licenses for everything from shoe imports to arms exports, and administering the state's energy assets.

Agriculture Minister Miroslav Jureňa - nominated by the Movement for a Democratic Slovakia - was also in the Slovenský Hodváb firm with Poór. The Agriculture Ministry plays a major role in deciding how EU subsidies for the sector are doled out.

Ironically, before elections it was HZDS Chairman Vladimír Mečiar who pointed out for this newspaper that cooperating with Smer meant risking being dictated to by the likes of Poór and Široký.

"The founding members of Smer are people who operate in the shadow economy," Mečiar said in a May interview. "It's not just Poór, it's also Široký and others. These people have direct influence on [Smer] members of parliament. I know them personally, as I kicked them out of the HZDS in order to rid politics of this element.

"If Smer became a government party, what would they want? They would want to control the economic flows within the state for their own benefit... I would fear a further deformation in Slovakia caused by this anonymous group, and a deepening of corruption."

Smer Chairman Robert Fico rejected any links between his new ministers and Široký or Poór.

"I reject any kind of speculation of this sort," he said on the STV state channel.

One of the most interesting names in the new cabinet is that of Finance Minister Ján Počiatek, who according to the Sme daily drives a Porsche and is building a new house in the ritzy Slavín neighbourhood in Bratislava.

Počiatek, 35, is a business associate of Smer's vice-chairman and incoming Interior Minister Robert Kaliňák, with whom he founded the Steam & Coffee restaurant network. He has worked with the telecom firm Telenor Slovakia since 1995, and as of 2001 has been the firm's director.

But his other business activities are more curious in a finance minister. For example, he is a shareholder in the Harley Davidson Bratislava firm, which operates a pub on the outskirts of the capital.

Another of Počiatek's firms, LM Development, has applied for permission to build a new 43,855 square-metre recreation facility called Castoria on the shores of the Liptovská Mara lake south of the High Tatras mountains.

The facility would offer tennis courts, a fitness centre, a pool, and mini golf as well as houses, cottages, condos, a pension and a 180-bed hotel, according to an Environmental Impact Assessment published on the Internet in April 2006 by the Environment Ministry.

The ministry has so far not approved the project, and has asked for further documentation.

According to the official Smer website, Počiatek since 2003 has also been a co-owner of Rostik Restaurants, which from 2001 to 2002 was registered at Križková 9, the headquarters of the Penta Investments private equity group.

Rostik is a branch of the Moscow-based Rostik Group Corporation, which has been present in the Russian market since 1990 and operates and franchises casual dining restaurants under brands such as TGI Friday's.

Počiatek's father, Izidor Počiatek, was listed in the files of the former communist secret police, the ŠtB, as an agent. He served as the Czechoslovak ambassador to Indonesia, but failed the test of "lustration" in the early 1990s to rid public life of former ŠtB personnel.

He studied at the Moscow Institute of International Relations at the same time as outgoing Foreign Minister Eduard Kukan. Decades later, several of Penta's current shareholders attended the same institution.

Overall, the Fico government contains 16 members, 11 of whom were formerly members of the Communist Party, and an unknown number with links to people, such as Juraj Široký and Izidor Počiatek, whose names are to be found in the ŠtB files.