THE NEW Slovak government led by Prime Minister Robert Fico has announced plans to withdraw Slovakia's military unit from Iraq. The unit, around 100 strong, has been clearing minefields and destroying ammunition as part of the US-led international contingent. 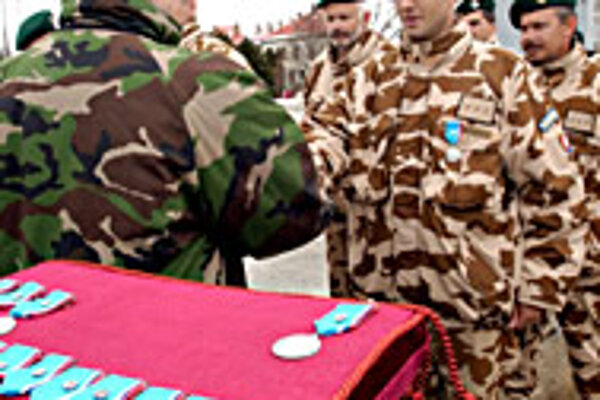 Font size:A-|A+  Comments disabled
THE NEW Slovak government led by Prime Minister Robert Fico has announced plans to withdraw Slovakia's military unit from Iraq. The unit, around 100 strong, has been clearing minefields and destroying ammunition as part of the US-led international contingent.

The plan immediately caused deep misgiving, not only because it implied a major shift in Slovakia's pro-US foreign policy to date, but also because of the manner in which it was announced.

After Fico said on July 1 that his new government would prepare a timetable for the withdrawal of the Slovak unit from Iraq, Ján Slota, the head of the ruling coalition Slovak National Party (SNS), said to journalists that "I really see no reason why we should continue clowning around there".

The far-right politician, who is notorious for his verbal outbursts and his drinking exploits, added fuel to the fire with further comments a day later.

"Compared to the huge level of poverty and the drastic things that people [in Iraq] experience, our involvement is insignificant. The significant thing is whether our soldiers will continue clowning around there or not."

Outgoing Foreign Minister Eduard Kukan, who since 1998 has overseen Slovakia's entry to NATO and the EU and its general return to international acceptance, called a special briefing to react to the plan and Slota's statements.

"I was not surprised by the statement of Robert Fico. He spoke about this issue before the elections and suggested he would try to withdraw our soldiers from Iraq. This is an issue that can be discussed," Kukan said.

However, the former minister pointed out a conflict with Fico's previous promise that the new Slovak government would continue in Slovakia's current foreign policy. He also noted that Slovak soldiers had originally been sent to Iraq on the basis of a parliamentary mandate and UN Security Council resolutions.

"I was much more disturbed by the words of SNS Chairman Ján Slota about our soldiers 'clowning around' in Iraq," Kukan said.

"I want to categorically reject the use of such vulgar words to put down our army and our soldiers. Those soldiers who are active abroad are the elite, the best professional soldiers we have. Calling their activities 'clowning around' is a gross offence to the memory of those soldiers who died while serving our country in Iraq."

"That statement [by Slota] was out of line and has no place in international relations. If the Slovak soldiers in Iraq are 'clowning around' then the UN is also 'clowning around' - not just in Iraq but also in other operations in support of peace," Samson told The Slovak Spectator.

Fico did not comment on Slota's statement, but insisted that "Slovak soldiers have nothing to do in Iraq". He said the timetable for the withdrawal of the Slovak unit would be subject to talks with experts.

He added, however, that Smer was ready to discuss strengthening training programmes for Iraqi security units in Slovakia, and said that the new government would also consult the withdrawal of the Slovak unit with its foreign partners.

According to Samson, the new Slovak government should first "ask itself several basic questions that relate not only to Slovakia's participation in Iraq but also foreign intervention in Iraq in general, questions such as whether Iraq will be safer if the foreign units leave.

"Will it serve the interests of Slovakia or any other country if Slovakia refuses to react to a total of four key UN Security council resolutions that asked for all UN member states to support Iraq? Can Slovakia be a model for the world when as a new non-permanent member of the UN's Security Council it refuses to participate in a humanitarian mission, however symbolic that participation may be, as it only has around 100 soldiers in Iraq?" Samson asked.

The analyst admitted that the government could initiate the withdrawal of the unit, but noted that it was questionable whether it could do so on the basis of a cabinet decision or whether a vote in parliament would be necessary.

"In any case, I don't think the government will have any problems gaining a comfortable majority [for the vote]," he said.

If the government does decide to withdraw the unit, Samson said, it should primarily discuss the decision with the Iraqi government.

"If it does so, it can then set up a system of withdrawal - for instance by the end of 2006, until which time the UN Security Council's mandate exists according to Resolution No 1,637," he said.

The government could also start reducing the number of soldiers.

If, when and in what form a Slovak troop withdrawal occurs remains unclear, as the new government has only started working on its specific plans for its four-year cabinet term.