Who's who in the new government

Prime Minister Robert Fico (42) - A professional politician and lawyer born in Topoľčany. From 1986 to 1995 he worked at the Justice Ministry Legal Institute as an expert in the field of criminal law; between 1994 and 2000 he represented Slovakia at the European Court of Human Rights and the European Commission for Human Rights. 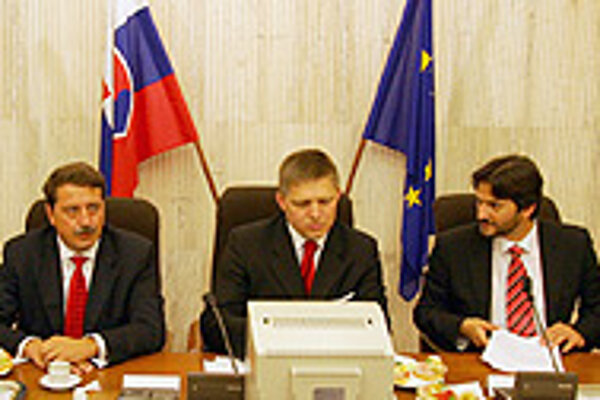 Font size:A-|A+  Comments disabled
Prime Minister Robert Fico (42) - A professional politician and lawyer born in Topoľčany. From 1986 to 1995 he worked at the Justice Ministry Legal Institute as an expert in the field of criminal law; between 1994 and 2000 he represented Slovakia at the European Court of Human Rights and the European Commission for Human Rights. He has been an MP since 1992, originally as a member of the reformed communist Democratic Left Party. In 1999, he left to form his own party, Smer.

Deputy PM for EU Affairs, Human Rights and Minorities Dušan Čaplovič (59) - He studied at Bratislava's Comenius University. Between 1980 and 2002 he worked at the Slovak Academy of Sciences and later at the Archaeological Institute in Nitra. Since 2002, he has also been an MP for Smer.

Justice Minister Štefan Harabin (49) - He completed his legal studies in Košice in 1980. Since then, he has worked in the judiciary as a district, regional and Supreme Court judge. From 1998-2003 he was the chief justice of the Slovak Supreme Court, and later became the head of the Judicial Council (2002-2003).

Environment Minister Jaroslav Izák (51) - Born in the mining town of Handlová, he studied at Bratislava's Slovak Technical University. Between 1980 and 1988, he worked for the Priemstav construction firm. From 1995-1998, he led a local environment office and, since 2004, has been a businessman and manager in the architecture, construction, and environment fields. He was also once mayor of Handlová.

Economy Minister Ľubomír Jahnátek (51) - A native of Nitra who studied at the Slovak Technical University in Bratislava. He worked in the research institute for the processing and application of plastics materials between 1978 and 1992, and later became the general director of plastics producer Plastika Nitra and served as the head of strategy at the chemicals producer Duslo Šaľa (1992-2005).

Construction and Regional Development Minister Marian Janušek (46) - He was born in Žilina and studied at the city's University of Transport and Communications. Between 1985 and 1989 he worked for the chemicals producer Považské chemické závody and, between 1990 and 1994, for the Váhostav construction firm. From 1995-1999 he was the deputy head of Žilina's district office. From 2001-2002 he worked as a manager with the supplementary pension insurer Stabilita, and from 2002-2006 he was the deputy mayor of Žilina.

Agriculture Minister Miroslav Jureňa (52)- He studied at Nitra's University of Agriculture and worked as chief economist for a farming cooperative in Gbely between 1977 and 1990. Since 1991 he has been active in the business sphere.

Interior Minister Robert Kaliňák (35) - A graduate of the Faculty of Law of Bratislava's Comenius University, Kaliňák worked as a lawyer between 1995 and 2002. He was then elected as an MP for the Smer party, and served as the head of the parliamentary Defence and Security Committee and the head of the special Oversight Committee for the Activities of the National Security Office. He is deputy chairman of Smer.

Defence Minister František Kašický (37) - Born in the eastern Slovak town of Gelnica, Kašický studied at the Military Pedagogical School in Bratislava and worked as head of the defence minister's office between 2001 and 2003, as well as ministry spokesman. From 2003-2004 he was the head of the Military Defence Intelligence Service. Since 2004 he has been the secretary of the parliamentary Defence and Security Committee, as well as the special Oversight Committee for the Activities of the National Security Office and the Committee for the Use of IT Devices.

Foreign Minister Ján Kubiš (54) - A professional diplomat who graduated from the Moscow Institute of International Relations. Between 1976 and 1992 he worked for the Czechoslovak Foreign Ministry, and between 1993 and 1994 was the ambassador and permanent representative of Slovakia to the UN. Between 1994 and 1998 he was the head of the OSCE centre for conflict prevention, and between 1999 and 2005 he served as OSCE General Secretary. Since 2005 he has worked in Brussels as a special EU representative for central Asia.

Culture Minister Marek Maďarič (33) - Studied at Bratislava's School of Performing Arts, graduating in 1989. For several years he worked as script editor for the public broadcaster Slovak Television (STV), and was deputy chairman of the STV Council between 2002 and 2004. Between 2000 and 2002 and 2004 and 2006 he headed Smer's media department.

Education Minister Ján Mikolaj (52)- Comes from Košice and studied at the University of Transport and Communications in Žilina. Between 1995 and 1998 he was the head of the Slovak Road Administration Authority (SSC) and until now has been the head of the construction technology and management department at his alma mater. He has been an MP since 2002 and was also a member of the university accreditation commission and the cabinet's council for the construction of highways.

Finance Minister Ján Počiatek (35) - Born in Bratislava, he studied at the local Slovak Technical University and also at Bratislava's Economics University. Since 1997 he has worked for Telenor Slovakia, where he has been executive director since 2001. He has been involved in various IT projects since 1995.

Labour Minister Viera Tomanová (58) - Graduated in 1980 from Bratislava's University of Economics and has been dealing with social issues ever since. Between 1988 and 2003 she worked at the Labour Ministry as the main state advisor, head of the social services section, and the minister's advisor. She has also worked as a university teacher since 1994.

Health Minister Ivan Valentovič (52) - This native of Trnava studied at the Medical Faculty of Bratislava's Comenius University. From 1986 to 1992 he worked at the Health Ministry. Since 1994 he has worked for various health care insurers.

Transport, Post and Telecom Minister Ľubomír Vážny (49) - A native of Žilina, he studied at Bratislava's Slovak Technical University. Between 1981 and 1985 he worked at the construction company Pozemné stavby and from 1985-2002 for Stavoinvesta. Since 1994 he has led the company. He was also a member of the supervisory board of pharmaceuticals producer Biotika between 1997 and 2002. Since 2002 he has been an MP for Smer. He also worked as the deputy chairman of the parliamentary Economics Committee.