THE ELEVENTH year of the Oskár Čepan contest for young Slovak artists has its winners. Anetta Mona Chisa and Lucia Tkáčová, who have occupied a firm position in the local art scene for six years, were the favourites. 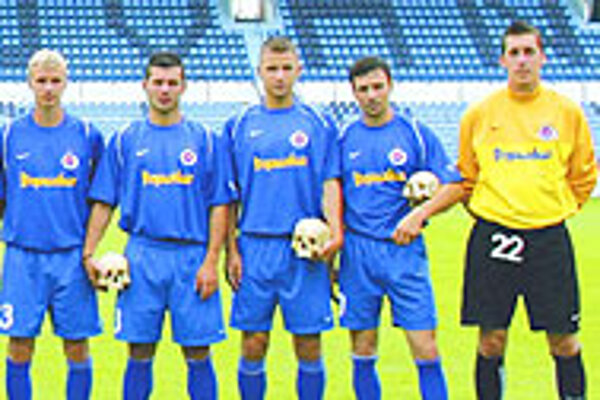 Font size:A-|A+  Comments disabled
THE ELEVENTH year of the Oskár Čepan contest for young Slovak artists has its winners. Anetta Mona Chisa and Lucia Tkáčová, who have occupied a firm position in the local art scene for six years, were the favourites.

"To be honest, we weren't totally pleased that, year after year, younger and younger artists, often students, were the only artists participating in the competition. We were happy to welcome them, but we also wanted to attract established artists, who really knew how to present the country's work," said Jana Oravcová from the Slovak Centre for Contemporary Art (SCCA).

Therefore, the centre formed a Council of Nominators made up of art theorists and curators. The council recruited 17 entrants, and 23 more applied on their own. This meant a record number of 40 participants, which, organisers say, naturally meant increased quality.

The wife of the US ambassador to communist Czechoslovakia between 1983 and 1986, Luers remembers how they filled their residence with major American cultural figures and invited Czechoslovak artists and writers to meet them - almost all dissidents - as a sign of how important developing culture is to creating democracy.

Since Communism fell in 1989, Luers, who heads the US Foundation for a Civil Society, has organised the Young Visual Artist Award in Central and Southeastern Europe. The first such competition, the Jindřich Chalupecký Award in the Czech Republic, was founded with Václav Havel as soon as he was named president in December 1989.

The foundation moved its office here in January, 1993 and, in 1995, established the Oskár Čepan Award, named after the significant Slovak art historian Oskár Čepan (1925-1992).

Since then, the project has expanded to eight countries, including six Balkan countries - Bosnia and Herzegovina, Croatia, Kosovo, Macedonia, Serbia and Slovenia - enabling artists under 35 to compete openly in their home country, with the finalists being exhibited at major galleries and the winner receiving a fellowship for study in the USA. The fellowships are supported from the Trust for Mutual Understanding in New York. Slovnaft and the Central European Foundation help with the Čepan Award.

This year, the joint exhibition of the winners of all eight competitions as well as a meeting of the organisers from each country will be on October 5 in Pristina, Kosovo.

The Slovak Spectator talked to Luers on the day of the Čepan Award ceremony.

The Slovak Spectator (TSS): What do you think of this year's results?

Wendy W Luers (WWL): I am delighted to see some of the winners are painters because installation and video are less accessible, so they make it much harder to show the world what we are achieving. The paintings, as well as video and installation, are wonderful.

TSS: How about the winners?

WWL: I like their work very much and find it marvellously amusing, ironic and sophi-sticated. They will be well received in the US. Also, the winners that go to the New York studio programme (ISCP) will be joined with artists from Japan, Norway and Korea, among other countries, which will be a hugely important exposure.

TSS: You have mentioned the new grant from the European Cultural Foundation (ECF) in Brussels, which will be administered in Slovakia by the SCCA. What advantages will this cooperation bring?

WWL: The ECF grant to the Slovak Centre for Contemporary Art will do two major things. One, it will enable us to build a website that profiles all the finalists [from all the eight countries we support]. Secondly, it will support trans-border cooperation by paying for travel to other festivals.

TSS: How significant is the Slovak scene to the world?

WWL: Very insignificant. That's why it's so important for Slovaks to meet with artists and curators from around the world, which allows them to compare the quality of their work and the situation in other countries. This provides essential exposure for them.

TSS: How significant is the Young Artist of the Year prize you initiated?

WWL: The Chalupecký Prize [in the Czech Republic] is hugely significant. Everybody knows what it means. All of its winners are in national galleries and news reports include the title after the artists' names. This is beginning to happen in the other countries.

All these different awards over the years have enabled 180 artists to have exhibitions, 40 of whom have come to the US. That's a lot.

TSS: How did the Oskár Čepan Prize come about in Slovakia?

WWL: In the beginning of the country, 1993, the Foundation for Civil Society had a branch office in Slovakia which ran the competition. That office became the highly successful Pontis Foundation. We then co-produced the exhibitions at the City Gallery. The Award has grown in prominence and importance.

The Slovak Centre for Contemporary Art is continuing the mission, and doing a fantastic job. The quality of the work, the exhibitions and the management has improved each year. More sophisticated artists are receiving the awards, which doesn't mean that students can't produce wonderful work, but the winners this year speak English and can really take advantage of their stay in New York.

TSS: Could you compare the development in Slovakia with other countries?

WWL: I don't like to compare. Every artist in every country does something different. The artists from Croatia, Kosovo and Serbia are usually very concerned about the war and the impact of refugees, killing and bombs, which happily Slovakia has not had to deal with. Artists respond to their own environment. And we are excited about spreading the artistic network further into the Mediterranean, and perhaps into Turkey. There's no limit, except funding.

TSS: Slovakia has a new government. Do you see it affecting the competition in any way?

WWL:Personally, it seems like a return to the earlier days [when Vladimír Mečiar was in power, 1994-1998]. But I cannot imagine that the new government wishes to reduce foreign direct investment and thereby increase unemployment. I hope that [Prime Minister Robert] Fico and the others see cultural exchange and young artists' expression as very vital to building a successful country.