Clean surroundings and symphony on stage

ABOUT a hundred musicians from around the world will land at Trenčín airport to play at Pohoda. The 10th year of Slovakia's largest music festival takes place on July 14 and 15. 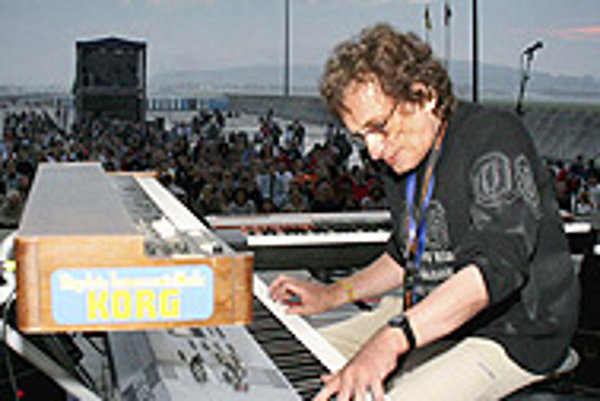 Font size:A-|A+  Comments disabled
ABOUT a hundred musicians from around the world will land at Trenčín airport to play at Pohoda. The 10th year of Slovakia's largest music festival takes place on July 14 and 15.

Pohoda, however, has long been more than a music festival. Obviously, the music leads the way but the countless number of accompanying events from theatre plays and literature readings to dance workshops and massages might easily distract you from what you've come there for.

"We want the festival to be perceived as an artistic, not just a musical happening," says the festival's organiser, Michal Kaščák.

It is therefore no coincidence that theatre opens both festival days. Friday will see the Aréna's play on the controversial wartime president Jozef Tiso. Saturday will open with Desatoro, The Ten Commandments according to Stanislav Štepka. Discussions will follow on political and religious themes, as the festival's motto is not only to "entertain but also educate visitors".

No matter how the other activities capture your attention, remember to catch the two largest events - the concert of Marián Varga with Bratislava Chamber Orchestra and the exceptional project World of Svetozár Stračina.

The latter is a concert of film music with traditional arrangements by leading Slovak composer Stračina, performed by the symphony orchestra under the baton of Július Selčan. It will be the first time the festival has welcomed a symphony orchestra on stage. Last Pohoda, the phenomenal Slovak keyboardist Varga welcomed sunrise with music he specially composed for the occasion and now he returns to play with the chamber orchestra led by Anton Popovič.

The two concerts open on the Bažant stage at 13:00 (July 14 and 15, respectively), and both will be broadcast live by Devín Radio.

The three open-air music stages plus a handful of indoor tents specialising in dance or classical music, will see several headliners. Among the main ones are the American alternative legend Pixies and the Irish guitar rock band Frame, considered the successors to the legendary U2.

"Apart from Stereo MCs and The Frames, all other [foreign] performers are coming to Slovakia for the first time," Kaščák says. He also states that none of the bands has made any special requests, "or maybe we've got used to them over the years". Only the electronic Coldcut, which moved its concert to 17:20, wants the organisers to artificially darken the open stage.

From the local Czech-Slovak music scene finally comes the chanson singer Hana Hegerová, after years of invitations she was unable to accept until now.

Although this is the 10th year of the festival, organisers say they prepared nothing special. "We only want each year to get better."

They mean it literally in all aspects - from perfect toilets and excellent illumination to mobile banks, sun creams and separated waste. The last is a worldwide trend that teaches the festival's visitors to think of the environment while having fun. With the help of a hundred volunteers, every visitor will be instructed on how to separate waste and will receive two bags for that purpose when entering the camping area.

Meanwhile, you can visit Dance House to join one of eight dance workshops from folk to hip hop. Sculpture symposium will take place nearby, as will painting and graffiti workshops. Mobile cinema Bažant kinematograf will screen mainly Czech and Slovak films but also world premieres, including the Irish-British The Commitments by Alan Parker, and the Norwegian-American Faktotum based on Charles Bukowski's book. Ida Kelarová, who is convinced that everyone can sing, will lead one of her famed workshops, and the participants will then make it onto one of the festival's stages.

Visitors to the festival will discover other environment-friendly activities when taking the solar-energy showers or getting in the rickshaw, the small cart pulled by a person. The legendary Trabants will also help transport visitors from stage to stage.

The traditional water cannons will be ready to splash the hot fans and larger shaded areas will be provided. An authentic traditional log house with trees planted around to serve as a restaurant will be erected in the centre, and a remote part of the airport with a chapel will serve as the Zone of Silence.