The new coalition government, led by the left-wing Smer party, has pledged more solidarity in its economic planning and policies designed to benefit the low-income groups of the population. 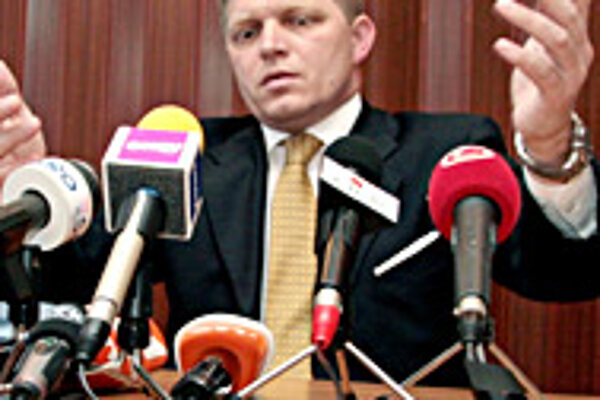 Font size:A-|A+  Comments disabled
The new coalition government, led by the left-wing Smer party, has pledged more solidarity in its economic planning and policies designed to benefit the low-income groups of the population.

Although it remains unclear how the government will finance its increased social spending, the ministers pledged that social policies will not endanger the country's planned adoption of the euro in 2009. Adoption of the Euro requires that public deficit not exceed 3 percent of GDP.

For PM Robert Fico, one way of meeting this requirement was "to slim down the state administration on the regional level."

Whether that will be enough to compensate for the expected social expenditures is unclear, as the new government has not yet presented specific plans to accomplish this. Fico pledged to submit the government programme to parliament by August 3, adding that it would be rich in content and very specific, so that there will be no doubts as to how the government will fulfill its plans.

"We shall not hesitate to abolish the fees in health care. We will do it immediately," said Fico following the July 10 coalition council meeting.

Apart from scrapping the Sk20 and Sk50 payments in health care, which were introduced by the previous right wing government, the coalition also promised new taxes on selected monopolies and a special tax to be levied on banks.

These pledges came several days after Finance Minister Ján Počiatek insisted that these plans be scrapped as he did not consider them effective.

Fico, who met with Počiatek on July 11 later said that he respected the minister's expertise yet noted that the coalition council wished to introduce these taxes to "fulfill the promises that it gave to the voters." Fico added that the minister would have to go along with that wish.

The coalition also pledged a lower VAT rate for selected products including basic food. The items that will fall within this tax, however, have yet to be specified.

Fico also indicated that the coalition plans to increase the state childbirth benefit to around Sk20,000 for the first child. The benefits for subsequent children will remain at the current level of Sk4,460.

Fico also stated that the government would try to halt the privatization of the Bratislava and Košice airports. The two airports were sold by the previous government to TwoOne, a consortium which also owns the Vienna airport.

The privatization is pending a decision by the Slovak antitrust authority PMÚ. While the Austrians hope to have the deal confirmed, the Slovak PM would like to see it dropped for good.

The new Economy Minister Ľubomír Jahnátek who was officially installed in office on July 7, said he would do his best to send positive signals to foreign investors.

"We are interested in cooperation with foreign investors and we will create such conditions for them so that they locate their future investment destinations in Slovakia," he said adding that the investment incentives would also be among the priorities of the new government.

Jahnátek has already made it clear that the energy sector would be among his priorities. He said he wants to buy back the 49 percent stake of Slovakia's oil transportation company Transpetrol from the troubled Russian firm Yukos.

PM Fico meanwhile stated that his government would not sell off any outstanding state stakes in energy companies.

The PM also pledged he will take steps to complete the third and fourth blocs of the Mochovce nuclear power plant.

In the area of transportation and telecommunications, new minister Ľubomír Vážny pledged to re-evaluate the sale of Bratislava and Košice airports and also promised to consider the continuation of the sale of Slovakia's dominant railway cargo firm ZSSK Cargo Slovakia.

Unlike the previous government, which wanted to sell a majority stake in the company, Vážny said he would rather sell a minority interest, a stake of between 33 and 49 percent of the company.

The new health care minister Ivan Valentovič confirmed his goal of abolishing the health care fees, as confirmed by the coalition council meeting.

However, doctors and health insurers have warned that the shortfall of cash would have to be made up. It has been estimated that cancellation of the fees would create a Sk2.5 billion decrease in funds for doctors and hospitals.

Major changes also are expected in the area of social affairs. The coalition council has already promised to define the level of minimum pension and increase the minimum wage.

The coalition leaders announced that changes would be made to the second pillar of pension reform carried out by the previous government in order to save national insurer from a dire economic situation. It remains unclear, however, what these changes would be.

New Labour Minister Viera Tomanová said that there were "many sore points" in her sector. She added: "We have to wait for the cabinet programme manifest that will clarify the specific steps."

The new Education Minister Ján Mikolaj said he was confident he could complete the planned curricular reform of the Slovak education system within two years. He also predicted that he would have to increase his staff ten-fold to manage and distribute the expected arrival of billions in eurofunds to the ministry.

When installing the new Foreign Affairs Minister Ján Kubiš, PM Fico said that he wished Slovakia had better relations with the Russian Federation as he considered "this relationship to have been a bit undervalued".

As his first international visit, Kubiš went to Hungary on July 11 to assure the Hungarian foreign minister of Slovakia's intention to respect the rights of the Hungarian minority in Slovakia and to maintain neighbourly relations with Hungary.

The presence of the nationalist Slovak National Party (SNS) in the new coalition provoked international fears that Slovakia's minorities would not be treated as well as they had been under the past government.

The new Deputy PM for EU Affairs and Human Rights Dušan Čaplovič stated that he would guarantee that the same standards towards minorities would be continued.

"I want to assure you that things will be settled with tolerance in a culturally sensitive manner so that we politicians will not disturb the relations in the [ethnically] mixed areas," said Čaplovič.

As to international policy, one of the main goals of Fico's Smer is the withdrawal of the Slovak military unit from Iraq.

New Defense Minister František Kašický has already stated that the pullout of around 100 Slovak military engineers would be a part of the cabinet programme manifest. He also pledged, however, that the withdrawal would be coordinated with Slovakia's allies.

Changes are on the way in the ministry of justice as well. Before the planned cabinet break in August, new Justice Minister Štefan Harabin, has already signalled that he wants to ask the government to increase the number of judges by 200 to help at least temporarily with the overburdened court agendas.

Harabin, a controversial former head of Slovakia's Supreme Court, also suggested that he would look into the operation of the Special Court. It was not fair, he suggested, that special judges, who decide highly sophisticated cases including corruption and complicated mafia trials, should receive higher wages than the regular agenda justices in the district and regional courts.

"The constitution does not know two categories of judges," said Harabin.

He insisted that he would not bring politics into the judicial sector and noted that in cases such as the possible rehabilitation of the former Secret Service director Ivan Lexa, demanded by HZDS chairman Vladimír Mečiar, he would rather just "respect the presumption of innocence" principle.

The new Interior Minister Robert Kaliňák, who is responsible for the police, pledged to create conditions for officers that would make them "resistant to corruptive pressures". He wants to focus on fighting extremism and hate crimes, and cooperating with NGOs in this area.

Kaliňák has already rehabilitated Miroslav Litva, the former head of the police officers' union, who organized protests for better pay and who was subsequently fired by previous minister Vladimír Palko.

Palko also fired Litva from his job as the head of the scientific and technical section at the Police Presidium. Kaliňák has now restored the union boss to that position as well.

Kaliňák did not say whether he was considering replacing any of the top police figures such as police president Anton Kulich or police VP Jaroslav Spišiak.

Kaliňák said he wants to make the people safer by putting more officers on the streets. He also intends to look into the ministry's handling of contract tenders after the previous government's procedures were criticized by the public procurement authority.