WHILE a couple days after the parliamentary elections it seemed the Christian Democrats (KDH), who garnered 8 percent of the votes, were key to the shape of the next government, the party has since been relegated to the opposition and mired in deep crisis. 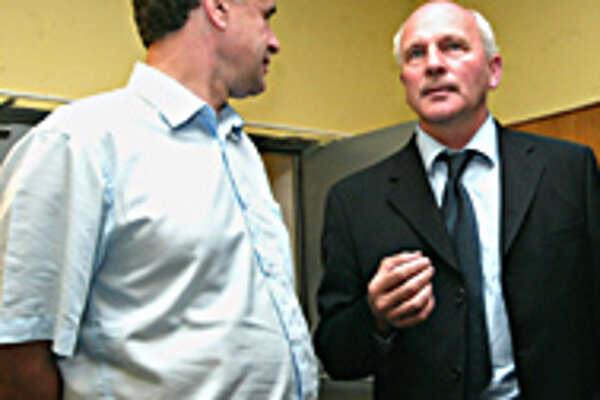 Font size:A-|A+  Comments disabled
WHILE a couple days after the parliamentary elections it seemed the Christian Democrats (KDH), who garnered 8 percent of the votes, were key to the shape of the next government, the party has since been relegated to the opposition and mired in deep crisis.

In early July, two of the party's most prominent members, Daniel Lipšic and Vladimír Palko, resigned their deputy chairmanships and quit the party's board. František Mikloško, who has been associated with the KDH for over a decade, also stepped down, as did Rudolf Bauer and Pavol Minárik, the former head of the KDH parliamentary deputy faction.

These high-profile departures only served to expose what had been boiling under the lid since the very moment the question "to rule or not to rule with Smer" emerged. The KDH chose to draw out the guessing game, keeping right-wing parties and the media on edge.

The party was deeply divided. Palko, Lipšic, Minárik and Mikloško opposed forming a coalition with Smer, even if it would have meant preventing the far-right Slovak National Party and controversial three-time prime minister Vladimír Mečiar from coming to power.

In the end, five of the 11-member KDH board voted against a union with Smer and six for it. Soon afterwards, Minárik, who had voted to oppose the cooperation, failed to be re-elected as chairman of the KDH deputy faction in parliament.

Commenting on the situation, Palko said his resignation was due partly to the board courting Smer and partly in protest of the retaliation against Minárik.

He added he expects the party to spend time analysing the post-election developments and defining its values and limits.

Palko couldn't understand why the KDH offered its support to a leftist post-communist party.

"In a government like that, the KDH would only be an assistant, and that would be at odds with 16 years of KDH tradition," he said.

Lipšic believes the KDH's move gave Fico the chance he needed to humiliate the Christian Democrats. According to the former justice minister, the KDH has lost its self-confidence.

Though party officials have been denying any disintegration within the party, political analysts say that the situation is quite serious.

According to Grigorij Mesežnikov, the president of the Institute for Public Affairs think tank, the developments are serious because the crisis emerged in an environment that has so far been quite coherent and focused on projecting the impression of unity.

"Representatives from both wings uttered quite sharp statements that might wrinkle personal relations between the leaders. The voluntary departure of three key people, Palko, Lipšic and Mikloško, [from the board] is the most serious sign of problems within the KDH since the departure of Mikuláš Dzurinda and Ivan Šimko," Mesežnikov told The Slovak Spectator.

Mesežnikov says one of the major threats for the KDH is that it could become viewed as internally unstable, and find that image difficult to shake off.

"However, internal conflicts should not influence the party's opposition towards the current ruling parties. No matter which internal wing prevails, the KDH will remain in strong opposition to Smer-HZDS-SNS," Mesežnikov said.

Meanwhile former KDH chairman (1990-2000) Ján Čarnogurský, who said the KDH should have been prompter in responding positively to Smer, is planning to regain membership in the top bodies of the KDH.

Čarnogurský said the current crisis in the KDH doesn't compare to when Mikuláš Dzurinda left the party in 1998, demanding autonomy rather than a merger with the Slovak Democratic Coalition that was formed to defeat the Mečiar regime in parliamentary elections.

Meanwhile, Lipšic dismissed speculation that those who abandoned the KDH will set up a new party.

"Founding new parties is not in the interest of Slovakia. The party congress will decide in a democratic way," he said.

Mesežnikov does not think either that the conflicts will result in another party being formed.

"I do not expect the establishment of another Christian democratic party. It would be extremely hard to gain enough support to enter parliament. However, some KDH representatives just might end their political career if they become disillusioned with the party, as Čarnogurský did at times," Mesežnikov said.

Analysts, however, also think the party is facing a power struggle between the pragmatic wing, represented by Hrušovský and Čarnogurský, and the more fundamental and value-oriented wing dominated by Lipšic and Palko.

Lipšic even said recently that Palko would be a good chairman of the party.

Though some members opposed the idea of calling a special party congress, the party council decided to hold one this year. Originally, the congress was scheduled for 2007.

The KDH, however, also had to face harsh criticism from its one-time ruling coalition partner, the Slovak Democratic and Christian Union, and especially its chairman, former PM Dzurinda.

Dzurinda blamed the KDH for preventing the creation of a centre-right government that, in his opinion, more people supported than Fico's "socialist fantasies."

Dzurinda held onto his dreams of shaping a centre-right coalition to the very last moment, with the silent support of the HZDS.

He suggested that, if the KDH didn't want to shake hands with Meciar at coalition sessions, a SDKÚ-SMK-HZDS coalition could have been formed with the silent support of the KDH, but the Christian Democrats rejected this approach.

Mesežnikov, however, says the post-election cooperation between the right-wing parties will most probably continue, despite problems within the KDH.

"This party has no closer allies than the SMK and the SDKÚ. Besides, it has become clear that distancing itself from the SDKÚ has not brought the desired effect. The KDH voter prefers the party cooperate with the SDKÚ and SMK more than with any other party," Mesežnikov said.

"The [KDH] quit the cabinet due to internal conflicts, which was an issue that interested only a narrow group of voters," he commented. "Many did not understand all the implications of the conflict around the treaty with the Vatican, while the explanation that the KDH gave the public about its conflicts with Dzurinda was not understandable for most people."

Therefore, the KDH lost more than it gained, he said.

The analyst also thinks it will take a while until right-wing parties stop blaming each other for the post-election fallout, but adds:

"Their participation in the opposition won't be seriously affected by petty mudslinging."