ALMOST half of Slovakia's working population, who trusted the new pension scheme that replaced Slovakia's pay-as-you go pension system in 2004, now must carefully watch every step the new government takes as it plans changes to the system. 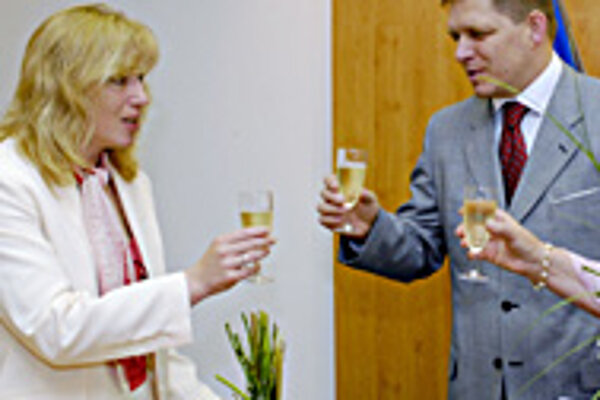 Font size:A-|A+  Comments disabled
ALMOST half of Slovakia's working population, who trusted the new pension scheme that replaced Slovakia's pay-as-you go pension system in 2004, now must carefully watch every step the new government takes as it plans changes to the system.

The country's social insurer Sociálna poisťovňa (SP) registered as of June 30, over 1.3 million contracts and citizens so far have deposited Sk17.3 billion in personal pension accounts.

While the previous government took pride in its pension reform inspired by the Chilean model, the new Minister of Labour, Social Affairs and Family Viera Tomanová said there are many holes to mend in the system.

The state pension system is rather complex. Currently, Slovaks transfer 18 percent of their salary to the country's social insurer Sociálna poisťovňa (SP). Half of the sum (9 percent) goes to the private pension funds (DSS) and half (9 percent) remains in the SP.

The new ruling coalition has hinted that it might propose keeping 12 percent in the SP and transferring only 6 percent to the DSS.

The pension system as instituted by the last government has three components: the first is the pay-as-you go element, the second consists of savings in private accounts, and the third is voluntary savings.

Prime Minister Robert Fico says the ruling coalition is deeply disturbed by the growing deficit of the SP that will continue to grow because half of incoming funds are due to be transferred to funds operated by private companies.

Former Labour Minister Iveta Radičová, a representative of the Slovak Democratic and Christian Union (SDKÚ) and a strong advocate of the existing system, says changing the rules of the present system now that people have started their savings accounts is outrageous.

Still Fico suggests that the percentage of the funds transferred to private accounts must be reduced. Radičová, however, remains skeptical that Fico's plan would solve the problem of the swelling deficit.

The former government planned to cover the growing deficit with privatization proceeds but Fico is a committed opponent to selling off the state's strategic properties to private companies and he has stated that this is not a viable solution to this problem.

The business community has come out strongly against the proposed changes. They say that altering the system now would be like changing the rules of the game after it has begun. The DSS has already made considerable investments into the system.

However, Director of the F A Hayek Foundation Martin Chren, who participated in a media debate over the issue with the new labour minister, says that the government has not yet made a final decision.

"The labour minister said the government wants to make the entry to the capitalization pillar voluntary for the people who are entering the labour market. They want to give people an option to decide whether they want to enter the second pillar or not," Chren explained to The Slovak Spectator.

Chren says that the government's final decision will depend on the financial balance of the pension system since the state must somehow find the money to cover the deficit in the SP.

According to Chren, the public finances are currently tuned in a way that they should be able to handle the deficit of the pension system.

Chren says that for him the most important factor is what kind of impact the changes will have on the people.

"The pension system was reformed because the old system did not secure sufficient pensions for the future. If the state decides to trim down the second pillar, the basic impact will be that the people will not have a dignified pension secured in the future.

"The second thing is that the eventual change would threaten the functioning of the whole sector," Chren says.

"As the system is currently turned, the DSS will start making a profit in about ten years. If the payments to the second pillar are reduced, the incomes of these companies would get reduced as well and their investments would be endangered," Chren added.

According to him, some companies might even consider suing the country for thwarting their investments.

At the end of March 2006, Allianz - Slovenská DSS had the largest share of the market, administering 30.8 percent of the total volume of pension savings.

In mid-June the Sociálna poisťovňa reported that it has used Sk6 billion (€160 million) of the privatisation proceeds it received from the sale of a 49-percent stake in gas utility Slovenský plynárenský priemysel (SPP) to cover the cost of introducing the capitalisation pension pillar.

"SP should receive another Sk11.6 billion from the Finance Ministry by the end of the year," she said to SITA.

A total of Sk70 billion has been earmarked from SPP's privatisation to settle debts related to the introduction of the second pension pillar.