EACH summer for the last six years, the world's top ceramists have gathered in the tiny village of Beladice, near Nitra, to create works, some of which adorn the interior and surroundings of both the neo-classical Pustý Chotár Manor House and an adjoining hotel nestled in a nearby park. 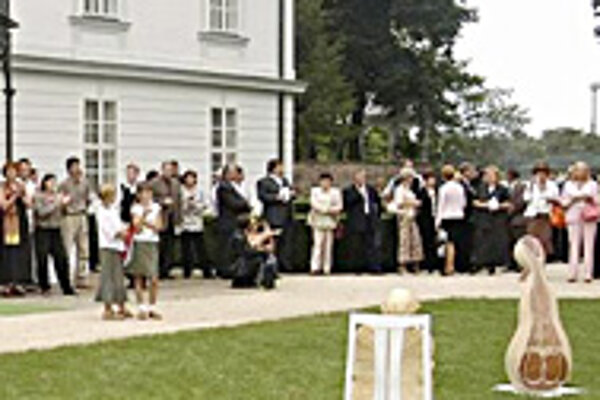 Font size:A-|A+  Comments disabled
EACH summer for the last six years, the world's top ceramists have gathered in the tiny village of Beladice, near Nitra, to create works, some of which adorn the interior and surroundings of both the neo-classical Pustý Chotár Manor House and an adjoining hotel nestled in a nearby park.

This year marks a somewhat sad occasion, as it will be the last workshop conducted under the leadership of Slovakia's renowned ceramics artist Ilja Holešovský.

Nevertheless, the workshop will continue. Its initiator, Jozef Vyskoč, executive director of Ekostaving Ltd, which manages the manor house, is already looking for a replacement.

As leader, Holešovský helped Vyskoč to organise the workshop and raised its profile by inviting well-known artists, many of whom he knew personally. Vyskoč plans to continue taking advantage of Holešovský's skills in the future.

The workshop is held in the Pustý Chotár Manor House built by the Jesenský family in 1820. Its seventh year will run from July 15 to August 4 and will be attended by six sculptors and ceramists, including Holešovský.

The artists will work with four different clays, such as fire clay and porcelain. The workshop never limits them in terms of theme, style or creative approach.

On August 4, an exhibition of all the works created during the workshop will be opened. A portion of the works will then remain to highlight the uniqueness of the manor house, which is a historical monument.

According to Holešovský, each of the invited artists has a unique style. For example, Ting-Ju Shao from Taiwan creates figural, dreamlike ceramic works. Gabriela Nepo-Stieldorf from Innsbruck, Austria moulds large, surreal figures.

From Austria also comes Georg Niemann, who creates everything from vases to garden artwork from various types of clay. Experimenter Boglárka Feketű from Hungary started as a ceramic artist, but later her interest grew to include porcelain. She gently plays with geometric shapes in lamps and coffee sets, embellishes porcelain boxes with silver and glass ornaments, and creates statues.

For the first time in history, a Japanese artist will attend. Holešovský met Katsunori Nakashima last year in Austria.

"Together with the Taiwanese artist, the two will demonstrate a completely different understanding of ceramics," he said.

Holešovský already has an idea of what he will create during the workshop, but did not want to specify, as it could change.

He was open about the fact that, like any other year, he is looking forward to the three-week process.

"The teamwork and debates about all of it is the most interesting part," Holešovský said of the tradition he has helped to organise and promote.

By Jana Liptáková
and Zuzana Habšudová