THE REGULAR Detva folk festival devotees expertly nodded their heads: this is the largest number of visitors in years and the programme is better than ever. 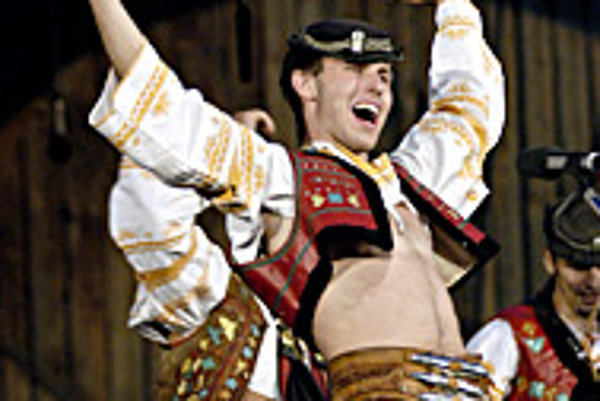 Font size:A-|A+  Comments disabled
THE REGULAR Detva folk festival devotees expertly nodded their heads: this is the largest number of visitors in years and the programme is better than ever.

In the midst of the 41st Under the Poľana Festivities, Saturday evening most astonished the organisers. More than 6,000 people wedged into the amphitheatre to see the famed Vrchársky Orchestra play and SĽUK ensemble dance, while thousands of others had fun with groups of musicians scattered around the food booths.

"Such interest pleasantly surprised us but at the same time caught us short," organiser Anna Ostrihoňová told The Slovak Spectator.

Detva lacked sufficient parking space and traffic was jammed on the way. But the organisers may not be to blame.

Východná and Detva. This year, however, the Východná festival did not happen. The postponement of the construction of a new amphitheatre broke the festival's 50-year tradition and its absence left a mark on Detva.

"Východná might be one of the two reasons that so many people came. Another was the attractive evening programme," Ostrihoňová said.

In the course of its three days, the festival hosted around 1,500 performers. It opened on Friday with local ensembles from around the Poľana region.

Later that day, President Ivan Gašparovič, true to the traditions of his native land, entered the stage in typical Detva costume with a bare belly and wide belt. He played the traditional fujara instrument, which he then traded Latvian President Vaira Vike-Freiberga for a Latvian cithara. The Latvian president joined him on the stage in her national costume. The presidents' spouses also wore traditional national dress.

Fujara and slovácky verbuňk, the two Slovak and Czech traditions added to the UNESCO list last year, dominated Friday evening. The first is a long, richly carved pipe-like instrument and the second is a male

improvised "jumping" dance preserved in the Czech region of Slovácko.

Along with the amphitheatre area situated at Detva's outer edge, the rest of the town also lived with the festival. Several courtyards invited passers-by to get to know the traditions of shepherds while tasting cheese products prepared on the spot, or to closely observe the carving of the typical Detva wooden crosses.

"We would like to spread the idea of these courtyards, which offer visitors an informal opportunity to learn about traditions and carry them into the future," said their organizer Roman Malatinec.

The Detva festival did not forget about Východná. The local Kriváň ensemble mentioned it at the closing Sunday programme.

"We hope everything goes well and Východná takes place next year," Ostrihoňová said, revealing that Detva also plans to reconstruct and enlarge the Detva amphitheatre area with the support of the European Union fund. However, the initiative has failed so far, as the private owners refuse to sell the land.

With festivals planning to enlarge, it is easy to see that interest in traditional culture endures. And not only among the locals. The regional festivals also attract foreigners, especially those with Slovak roots.

Detva annually hosts foreign Slovaks who perform in the programme. This year it saw 240 such performers arriving from the Czech Republic, Hungary, Croatia, Poland, Romania, France, the USA and Great Britain.

"We were the place where foreign Slovaks officially met also during communism," Ostrihoňová said, "and we want to remain the place where they get in contact with the traditions of their ancestors."