"WHO is he?" was the response from Slovak journalists when Prime Minister Robert Fico introduced his choice for the new director of the Slovak Information Service (SIS), Jozef Magala. 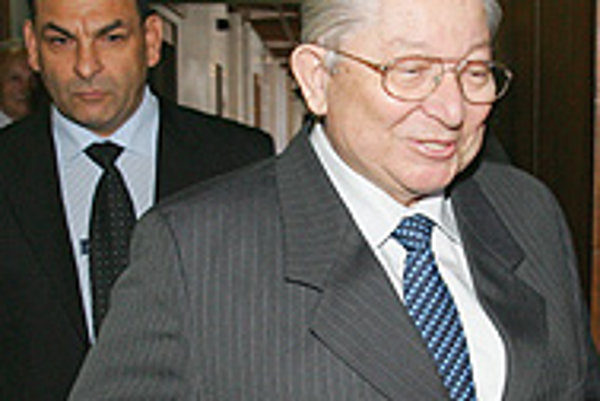 Font size:A-|A+0
"WHO is he?" was the response from Slovak journalists when Prime Minister Robert Fico introduced his choice for the new director of the Slovak Information Service (SIS), Jozef Magala.

Though unknown within the media and security circles, Magala meets all the criteria needed to lead the country's intelligence service, Fico said.

"The relationship between the SIS chairman and the prime minister and other state officials is about trust. Thus, it is crucial to select a man who shares their trust," The PM commented after requesting the president appoint him.

Fico also said it could be an advantage that the media know very little about Magala, since the boss of the SIS should be essentially invisible.

"The most important thing is that he acts in line with the law," he said while assuring the media that Magala will be a "good director".

Supporting his credentials is Interior Minister Robert Kaliňák, who told the TASR news wire that he has enjoyed cooperating with Magala in the field of security for a long time and thinks he will be a typical European-type intelligence chief.

Kaliňák expects Magala will investigate claims the SIS has been trading information, especially with regard to granting security clearances.

However, creating more of a stir has been the news that Smer's ruling coalition partners - the Movement for a Democratic Slovakia (HZDS) and the Slovak National Party (SNS) - will nominate the deputy directors of the SIS.

According to the daily SME, the HZDS will nominate Igor Urban to head SIS counter-intelligence. Urban oversaw the SIS during the Mečiar administration and led a parliamentary committee suspected of questioning SIS agents illegally. Police have halted their investigation of the charges.

PM Robert Fico has not commented on the nomination yet.

However, former Interior Minister Vladimír Palko has already said Urban is "morally unacceptable because he covered up the SIS's wrongdoings", adding that the everything about the operation of the SIS between 1994 and 1998 was at odds with the principles of democracy.

Political scientist Miroslav Kusý says Urban is discredited because of his past activities.

"It's not a positive sign for the HZDS, but that's not the only case in this party's history. It's characteristic for all three parties of the ruling coalition not to take their nominees' damaged credibility into consideration," Kusý told The Slovak Spectator.

According to Kusý, the SIS's record is nothing to be proud of.

"Of course, it is an institution that's shrouded in secrecy. However, many of the things that have leaked out about its past have damaged its credibility, and it's important that it regain trust," he said.

Magala is the fifth SIS director since Slovakia became an independent state. The first was Vladimír Mitro (1993-1995), who was appointed by former President Michal Kováč.

Next came Ivan Lexa (1995-1998), who was appointed by the cabinet led by former Prime Minister Mečiar.

Under the hands of Lexa, SIS agents were suspected of being involved in the abduction of ex-President Michal Kováč's son to Austria in 1995 and the murder of Robert Remiáš, who was a go-between to the star witness in the Kováč kidnapping.

After 1998, Lexa was charged with roughly a dozen crimes from his time as SIS director, including fraud, the illegal sale of used SIS guns, sabotage and abuse of power. To date, however, he has been convicted of only one minor offense.

This is because Mečiar issued blanket amnesty while acting president in 1998, preventing a thorough investigation from ever being conducted.

Mečiar continues to support Lexa to this day, stating shortly after making it to the ruling coalition this year that Lexa's name should be cleared, since courts have been unable to prove any of the charges against him.

Lexa's successor was Rudolf Žiak, who only held the post for a very short time. Magala's predecessor, Ladislav Pittner, was appointed by former President Rudolf Schuster on April 4, 2003, at the request of the cabinet.