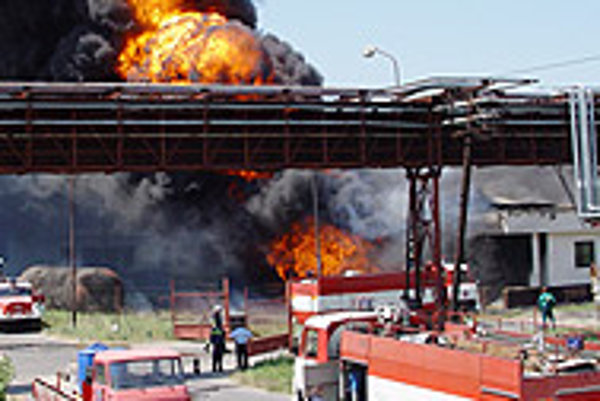 "We're puzzled that so many fires have broken out over such a short period of time," Detox's spokesperson Dominik Garaj told The Slovak Spectator.

Around 30 firefighters from local municipalities struggled for 10 hours to fully extinguish the blaze, which broke out at the Detox warehouse in Rimavská Sobota around 10:30 that morning. The damage has been estimated at Sk2.2 million.

Four hours after flames shot out in Rimavská Sobota, firefighters were also called to the Banská Bystrica site of the firm's parent office, to combat a fire in a transportation container carrying dangerous materials. Five firefighters managed to put the fire out in about 30 minutes.

Detox's warehouse in the Bratislava borough of Petržalka burned to the ground on June 18 causing damage calculated at Sk10 million (€262,000).

Nobody was hurt in the fires, though exploding containers of flammable liquids made the firefighters' work difficult.

The firm has no explanation for the blazes. Nothing similar has ever happened in the firm's 14-year history. It believes the fires were an "unfortunate coincidence".

Greenpeace was shocked by the number of fires in a firm that provides consultancy on the handling of dangerous chemicals and has an environmental certificate. Police are investigating the cause of the fires.

In the mean time, there is much speculation about possible illegal activities by the firm as well as possible trouble caused by industry competition. According to the SITA news wire, the firm has ruled out any potential gains from using fire to get rid of unwanted waste and has also refuted any theories built upon clashes with a competing firm.

Nevertheless, Detox filed a criminal complaint against an unknown culprit for damaging private property on July 14. According to Detox representatives, this should help create an "objective investigation of the case".

Mário Kern from the environmental crime section at the Police Presidium said the police asked experts to investigate the cause of the fires as well as prove whether the materials the firm listed agreed with what were stored in the warehouses.

"We're depending on expert analysis. Without this information it's difficult to reach any conclusion," Kern told the Spectator.

The fires are being investigated separately. As soon as the police find out what caused them, it will decide upon future steps.

"If we find out it was intentional, we will investigate the culprit's motive for doing such a thing. If it was caused by a technical failure or inattention, we will be interested in seeing to what extent the firm followed particular measures for the handling of such material," said Kern.

In Thursday's fire in Rimavská Sobota, almost 44 cubic metres of flammable materials burned. Among them were toluene, acetone, methanol, ether and organic diluents.

The top priority for the firefighters was to prevent the fire from spreading to a nearby warehouse which houses poisons such as potassium cyanide, sodium cyanide, nitric acid, phosphoric acid, ammonium chloride and pesticides.

According to the TASR news agency, firefighters did not rule out the possibility that if the fire had reached the poisons it could have resulted in an ecological catastrophe.

The firefighters and the controlling chemical laboratory of the Civil Protection Authority said that the concentration of harmful pollutants released into the air in Rimavská Sobota was only slightly increased.

Any reason to worry?

Greenpeace has asked the competent authority to inform the public about the details of the results. It warns that the incomplete burning of organic diluents can release toxic materials. The result of such a practice is the thick black smoke that spread across Rimavská Sobota.

The firm's executive official Lórant Vojček, however, questioned the link.

"The smoke that rose from the fire was not directly conected with the stored materials. One has to understand that all the flammable liquids were stored in special plastic containers. What also burned in the building were the insulation, the electronics system and the floors and these also produce black smoke when burning," he told the press on July 18.

Greenpeace activists arrived at the Bratislava fire two hours after it broke out, a full hour before the pollution-monitoring unit. They documented the accident, talked to witnesses, and shared the findings with the police.

"Everything suggests that chloral chemicals burned in Bratislava," Greenpeace spokesperson Juraj Rizman told The Slovak Spectator. He explained that the incomplete combustion of such chemicals releases dangerous dioxins, which can cause some carcinogen diseases.

"A certain concern [for citizens] is therefore justified," he added.

"The [Nitra] unit that measured in Bratislava arrived on the site only after the fire had burned for three hours. Some of the chemicals had already burned off. Moreover, measurements of dioxins were not made on the spot," said Rizman, who thinks it strange that Bratislava does not have its own measuring unit but had to call one from Nitra.

"Such units should exist in every regional capital."

According to the Pravda daily, the Slovak environmental inspection office checked all branches of the Detox firm after the Bratislava fire took place and found no violations of the law on waste. They also checked the Detox waste warehouses which are run by firms in Lúčnica nad Žitavou, Žiar nad Hronom and Strážske. They found nothing illegal in any of them.

Nevertheless, the inspection office ordered the firm to examine the water and ground at the fire localities. If pollution is proved to be a problem, the firm must provide for the cleanup of the location at its own expense.

"We've scared a lot of people with these fires, but they were never in any real jeopardy," said Garaj.

The mystery to be continued, a good reputation harmed

Detox is now facing a storm of speculation. Slovak Television found out that the Bratislava-Petržalka warehouse was not approved for the storing of dangerous materials. Rizman from Greenpeace warned that any problem with electrical installation, for instance, could be dangerous.

"All these things can appear as insignificant but because we're talking about dangerous materials here, flammable and explosive items, a technical failure could have fatal results," he said.

According to Garaj, the Detox warehouse in Petržalka is on a rented premises.

Garaj also explained that the Detox plants are secured with a camera system. The area in Rimavská Sobota spreads over 70,000 square metres and a guard secures it by walking around the area.

"We thought the area was safe. However, we cannot speak with 100 percent confidence that no stranger entered the area when you look at the size of the factory," Garaj told the Spectator.

The firm also refutes any technical failure as a cause. "What burned down were our warehouses, not the technologies used for processing," Garaj said.

It's now up to the professional prosecution bodies to give Detox a definitive answer about what has actually happened in its plants.

According to Greenpeace's Rizman, it's surprising that the firm, which provides consulting services to other firms on how to deal with dangerous waste, is wrestling with such problems.

Garaj admits that the good name of the firm has been threatened. "We were among the top processors of dangerous waste and our production capacities are difficult to replace."

He said that the name Detox has always meant professionalism, safety, precision and quality of work. The firm will take all necessary steps to regain damaged reputation.

"We mainly want to assure the public that our employees and citizens living or working in the area around our firm no longer fear that something similar will happen again. We still believe this 'black month' was only an unfortunate coincidence," Garaj said.

DARK smoke steamed out of the high-rise building of the former Presscentre on Pribinova street in Bratislava on the morning of July 14. According to the daily SME, the fire broke out in a shaft where welding was taking place. The building is currently undergoing renovation by the J&T company.

"Polystyrene began to smoulder on the second floor during the night," Maroš Sýkora of the J&T company told SME. The fire broke out around 6:00 and the burning material poured down to the lower floors. The air filled with a pungent smell."

The firefighters put the fire out within two hours. Police have started an investigation into possible public endangerment.