Changes to Labour Code will settle the bill

THE time has come for Prime Minister Robert Fico to pay his bill for the support the trade unions rained down on his Smer party ahead of the June 17 elections. The first payment should come through the modifications to the country's Labour Code, which has turned Slovakia into one of the most flexible labour forces in Europe. 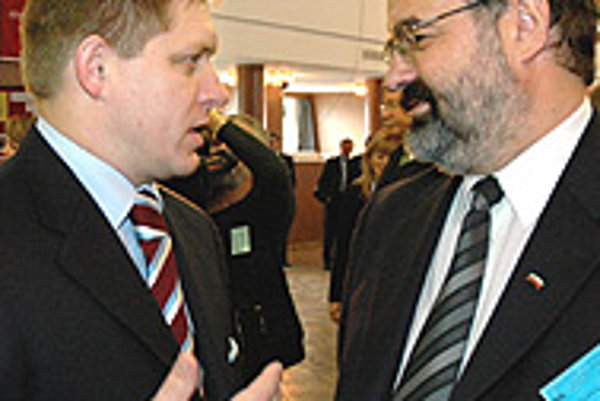 Font size:A-|A+  Comments disabled
THE time has come for Prime Minister Robert Fico to pay his bill for the support the trade unions rained down on his Smer party ahead of the June 17 elections. The first payment should come through the modifications to the country's Labour Code, which has turned Slovakia into one of the most flexible labour forces in Europe.

After signing a cooperation agreement with five trade unions in the spring of 2006, Fico promised to return the Slovak Labour Code to the form it had prior to changes made by former Labour Minister Ľudovít Kaník.

Fico said his government would produce a "standard European" piece of legislation and that the changes would be part of the new cabinet programme that the ministers expect to reveal to the public by August 1.

The current Labour Code increased the number of working hours (45 hours plus three overtime hours per week) over the old code, simplified part-time and fixed-term contracts and eased restrictions on hiring and firing.

The unions objected to it, claiming that firings should be more difficult for the employers and that the employees should enjoy more job security. Firing on the spot should be possible only in cases of a serious violation of working discipline.

They also want the new code to oblige an employer to provide employees with both severance payment and a term of notice. Under the current legislation, the employee cannot have both.

The Dzurinda administration supported the changes to the Labour Code with the arguments that a flexible labour market increases the potential for foreign investment and promises new jobs.

Furthermore, the legislation makes it easier to fire undisciplined employees and decreases the term of notice for standard work contracts from three to two months.

It also increases flexibility in labour relations as it defines only the basic framework of relations and leaves the details up to collective bargaining. The reforms also tried to make the system of benefits and contributions more transparent.

Meanwhile, the Slovak Chamber of Commerce and Industry (SOPK) requested the government preserve the labour code in its present form.

"One of our demands was to maintain the status quo of the current Labour Law. We have received signals, however, that the government wants to amend it in a way that we do not consider favourable," SOPK Chairman Peter Mihók said.

"We believe that the set of employee's rights provided for in the current Labour Code is sufficient. If there are issues, for example, relating to fixed-term employment, we can try to address that particular area," Mihók added.

Marcel Lukáčik of the Klub 500, which associates companies with over 500 employees, told The Slovak Spectator that the group would comment on the developments only after it sees the actual amendments to the code, since political statements often change.

"There are still things that can be improved in the Labour Code. However, we prefer the current code to the previous one, which was a sort of trade unionist labour code that favoured the employee highly over the employer. We prefer more balance," he told The Spectator.

In March 2003, the World Bank ranked Slovakia ahead of Denmark and Switzerland in its ability to shift workers from one economic activity to another quickly, smoothly and without disruption.

Economists say that countries with a flexible labour market are more competitive because they can adjust to the shifting demands as technology progresses and consumer tastes vary.

According to a 2005 survey by The Economist's Intelligence Unit, foreign managers listed Slovakia, along with India, the Czech Republic and Poland, as the most attractive countries for building or relocating production facilities.

Human resources experts say that many Western companies have decided to move their operations to Slovakia because of the inflexible labour laws in Western Europe.

On July 12, the Slovak Trade Union Confederation (KOZ) welcomed the results of the parliamentary elections suggesting that the unions had bet on a winner.

KOZ chairman Ivan Saktor was particularly satisfied with the unions being invited to participate in the drafting of the government's program.

Saktor said that other issues the unions will pursue are changes to legislation on collective bargaining, which regulate the discussion between the unions, employers and the government over certain laws that might have a social impact.

Under the March 23 agreement, unions representing metal, textile, tourism, construction and service workers pledged to openly support Smer in the campaign and recommended that their 84,000 members do likewise.

Fico promised to renew the "tripartite", a consultation body uniting government, business and labour representatives, which lapsed under the 2002-2006 Dzurinda administration.

The unions also bargained for a promise from Smer that the minimum wage would increase within five years to 60 percent of the national average wage, as opposed to the current 40 percent.

Former Finance Minister and member of the Slovak Democratic and Christian Union (SDKÚ) Ivan Mikloš said that the agreement between Smer and the labour unions would cost jobs rather than help workers.