THE CHEERFUL two-day celebration of Pohoda's tenth year saw a tragic ending. Slovakia's largest open-air festival reported the first fatality in its history. A young Czech died while dismantling a stage on Sunday morning of July 16. 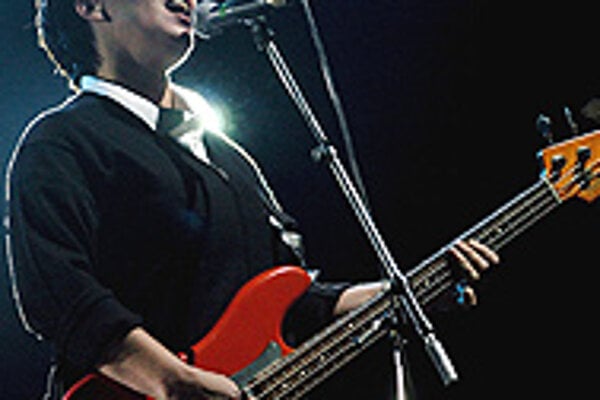 Part of the construction fell on the 21-year-old David from Prague and caused him serious injuries of which he later died in the hospital at Trenčín. Police are currently investigating the circumstances connected with the tragedy.

"We organise the festival so people can enjoy two nice days together. We do everything so they can return home in good health. David's death therefore, caused great feelings of grief among the staff. We extend our

This sadness was one of the strongest emotions that characterized this year's Pohoda. Other emotions were enthusiasm and happiness.

"Both festival days created the special atmosphere that is so typical of this event. The performances of the artists were marked with passion," the organisers stated in a press release.

Over 100 musicians from 20 countries performed on eight stages that were erected at the traditional site for the festival - the Trenčín military air-strip. Among the highlights of the festival were the concerts of the British band Zero 7 and Skye, Czech chanson singer Hana Hegerová, and The Frames from Ireland. Magic is the word used to describe the two "sun welcoming" concerts of keyboardist Marián Varga playing with cellist Jozef Lupták and the Trenčín Chamber Orchestra. The organiser, Kaščák, also performed with his band Bez ladu a skladu (Topsy-Turvy) on Saturday evening.

The legendary Pixies from America delighted the crowd by presenting a nearly two-hour long concert; but it

lacked the energy the band usually provides, according to the daily SME.

The newspaper noted, on the other hand, that the evening performance of London's grime-style artist Dizzee Rascal was one of the best of this year's festival.

Babylon Circus, Chicks on speed, Coldcut and Gogol Bordello also made the crowd move as did the British band Stereo MCS. The MCS performance was again very successful, the TASR newswire reported. The group returned to Pohoda after being the main headliner of the festival in 2002.

For the first time in a decade, theatre opened the festival. Marián Labuda, who played the controversial war-time

Along with theatre, literature, cinema, graffiti artists and dance workshops, the festival also offered space to 21 non-governmental organisations. The NGO's promoted everything from solar-energy showers, motor-less transport and nature protection to name but a few.

Pohoda was the first festival in the country that began to separate waste. Around one hundred volunteers from Friends of Earth managed to recycle almost 4.7 tonnes of waste, which was around 15 percent of the overall waste generated by the festival.

"Such a clean festival is a rarity not only in Slovakia but also in the world. I believe that we will manage to perfect the system next year and separate more waste," said the organiser Kaščák.