Social state or return to the past?

AMID jeers from critics, who are calling it a "return to the past", and applause from advocates, who have dubbed it a foundation for a socially-oriented market economy, the new Slovak coalition government led by PM Robert Fico unanimously approved its programme manifesto on July 31. 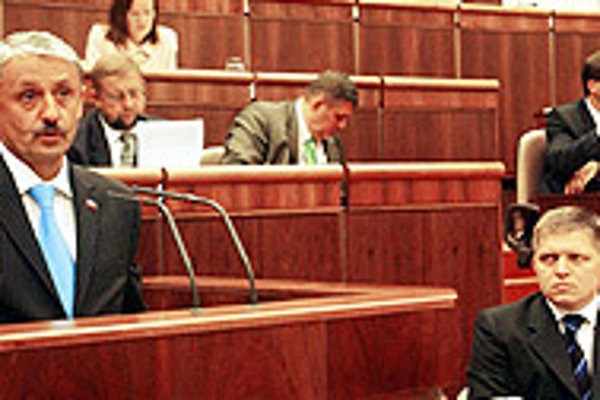 Font size:A-|A+  Comments disabled
AMID jeers from critics, who are calling it a "return to the past", and applause from advocates, who have dubbed it a foundation for a socially-oriented market economy, the new Slovak coalition government led by PM Robert Fico unanimously approved its programme manifesto on July 31.

The next day, PM Fico made a speech to parliamentarians before officially offering the programme for their approval. A vote was expected for late afternoon on August 3. A simple majority of the total 150 MP votes is needed for it to pass. Fico's coalition government has 85 MPs in parliament.

The PM insisted, despite opposition parties' claims the programme is unrealistic and represents a setback to some of the main reforms carried out by the previous government, that it was down-to-earth and to the benefit of the majority of Slovaks.

"The manifesto is based on article 55, paragraph 1 of the Slovak Constitution, according to which the economy is founded on the principles of a socially- and ecologically-oriented market economy," Fico said, adding that this is probably the first time that campaign promises have matched the government's programme to such an extent.

The left-wing Smer party managed to insert most of its pre-election vows into the document, which made Fico "comfortable" in his position as a party chairman.

"If someone thinks the governmental programme of an economically effective social state in reality will mean irresponsible spending or accruing of debt, or supporting the disabled while punishing the successful, they are seriously mistaken. We want to combine economic growth and economic performance with the growth of employment, social cohesion, and increase of the quality [of life] for all people," Fico said in his speech in parliament on August 2.

The plans outlined in the manifesto include measures such as a higher tax for people with an above-standard income, which has become known as "the millionaire tax."

Fico suggested that the higher tax should apply to people earning over Sk50,000-60,000 per month. But the business community and opposition, as well as economic analysts, have criticised this plan as tantamount to a punishment against successful, educated people who work hard for their money.

"This is a punishment for being successful and it decreases the motivation [to work hard]," former Finance Minister Ivan Mikloš said.

The government expects to rein in spending and insists it will not increase the number of bureaucrats in central state agencies. However, it has already signaled the creation of some new offices, such as a plenipotentiary for minorities and a government proxy for communication between the government, municipalities and higher territorial units.

In connection with monopolies and firms that enjoy a dominant position on the market, the government aims to fix these "market deformations" systematically through existing regulatory bodies. Unlike promised earlier, higher taxes for these companies is, as Finance Minister Ján Počiatek said, a measure of last resort.

The government agreed to introduce a reduced VAT rate - from the current 19 percent to an unspecified level - on selected goods and services. However, the list of these items also remains unspecified in the manifest.

The government also pledged partial compensation to the people who lost billions of crowns in scandals involving bankrupt unlicensed financial institutions, such as Horizont Slovakia.

In the area of social and labour affairs, the government pledged to amend the country's Labour Code to give more rights to the employees, announced a Sk15,000 one-off contribution to parents on the birth of their first child and signaled that entry into the second pillar of the pension savings scheme, which was approved as a major part of the pension reform carried out by the previous right-wing government, will be made voluntary.

The government also pledged to halt the privatisation of so-called strategic companies, such as the railway transportation company ZSSK Cargo Slovakia.

Following a series of contradictory statements in the initial days of the new government, Fico and the government manifesto now insist that "the government is directly committing itself to fulfilling the criteria necessary to adopt the euro in January 2009".

The new cabinet aims to complete two reactor blocks at the Mochovce nuclear power plant, and has also adopted a commitment that promises not to privatise state forests. Energy is one of the priorities of the current government, along with notions such as a knowledge-based society and socially stronger state. The government also pledged to focus more on what it described as the "economic dimension of foreign policy". It also wants to prepare the schedule of withdrawal of the unit of around 100 Slovak military engineers from Iraq, but in consultation with allies.

In the health care sector, the government pledged to abolish the symbolic Sk20 and Sk50 fees for doctor visits and overnight stays in hospitals, while the Sk20 fee for a medical prescription, which is paid to pharmacists, will be reduced.

The government also wants to transform the biggest Slovak health insurers, Všeobecná and Spoločná, back into public institutions. Under the previous right-wing government, all insurers were made into joint stock companies, which was seen as a method of ensuring more responsible and transparent financial behaviour.

The Slovak Labour Unions' Confederation (KOZ) has welcomed the cabinet manifesto as "favourable to employees".

"It grants privileges that unions were denied by the former government, especially in terms of employees' rights and collective bargaining," KOZ president Ivan Saktor told TASR.

Ahead of the general elections, KOZ openly supported Smer in turn for the PM's party supporting Saktor's upcoming candidacy in the municipal elections, in which he plans to run for mayor of Banská Bystrica. Opposition parties suggested before the vote in parliament that they would not back the Smer-Slovak National Party (SNS)-Movement for a Democratic Slovakia (HZDS) cabinet manifesto.

"It is not possible to combine populism with [economic] responsibility," SMK's Gyula Bárdos said.

Economic analysts welcomed the government's pro-euro pledge, as well as Fico's statements that in all of its measures, the government would have the strict Maastricht criteria in mind. Yet they remained slightly cautious about how the government wanted to maintain vigorous financial and economic discipline and possibly cut state spending with regards to the announced plans including additional payments to farmers, higher social benefits, and the pledge to compensate the clients of collapsed unlicensed financial companies.

ČSOB analyst Marek Gábriš said that many economic plans included in the manifesto were rather "vague, making it impossible to say whether the criteria will actually be met".

Analysts agree that the situation with government's priorities and specific policies will be clarified once the new cabinet presents its draft budget for next year.

Nevertheless, despite the likelihood that none of the opposition party MPs will raise their hand in favour of the Smer-SNS-HZDS manifesto, its passage, which will also automatically legitimise the new government, remains widely expected.