Open the door for the invisible

SLOVAKIA, like other countries of the former Eastern Bloc, has a long history of segregating people with disabilities. Such people used to be shut away from the "healthy population" and put in large, yearlong institutions, where they were divided based on gender and age, and often cared for by untrained staff. 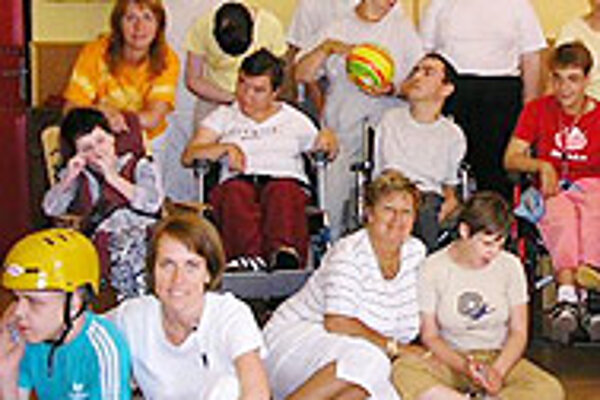 Font size:A-|A+  Comments disabled
SLOVAKIA, like other countries of the former Eastern Bloc, has a long history of segregating people with disabilities. Such people used to be shut away from the "healthy population" and put in large, yearlong institutions, where they were divided based on gender and age, and often cared for by untrained staff.

After the fall of the regime in 1989, the process of integrating these people into everyday life began, but experts say it still has a long way to go.

"Slovak and Czech students who come to my university in the United States almost always comment on how many students with disabilities are on campus. They are not used to seeing it," said Daniel Holland, a Mary E Switzer Distinguished Fellow with the National Institute on Disability and Rehabilitation Research in the US, who has been researching the issue in the Visegrad countries.

Holland sees the educational system as one of the biggest stumbling blocks to integration in Slovakia. Segregated schools that separate children with disabilities from non-disabled children, he says, are an outdated and poorly conceived approach.

"If children are educated in integrated schools where they have peers with and without disabilities, they will grow up to expect and support integration."

Martin Vatra from the Kompa social care home, which serves to mentally and physically disabled in the Banská Bystrica region, explains that Communism created the image that we all are perfect and productive. "[Disabled] people were not prosperous for society, so nobody talked about them and nothing was done in the area," Vatra said.

Kompa is one example that breaks away from the outdated institutional infrastructure built under Communism. It substitutes the heartbreaking yearlong separation with shorter, weekly and daily stays, and teaches the employees, as well as parents, new ways of approaching the handicapped.

However, preventing children with disabilities in rural areas from having to leave their parents to attend special schools in larger cities will require a massive change in the educational system.

"Every school should be able to accommodate children with disabilities," Holland said.

In the meantime, he says, models such as the Banská Bystrica social care home can be replicated in many other locations. He also adds that this is where the state must step in and devote far more resources to changing the system.

"When a Slovak family has a child with a disability, they are frequently faced with a difficult choice: send the child away to a special school or social care home where they can be taken care of, or keep the child at home and try to provide for it themselves. There needs to be more options," he said.

Vatra from the Kompa social care home agrees. He explains that the system of yearlong facilities should only be for disabled orphans, or for those who find it very difficult to adapt.

The one-day stays that Kompa provides include the necessary care from catering and provisory care to work therapy and leisure activities, where each client is treated individually. It regularly takes the disabled to various cultural and social events, and organises events for the disabled to meet the healthy.

Recently, the social care home obtained Sk127,990 for reconstructing a children's playground into a sport-relaxation zone for clients and Banská Bystrica citizens. The project is called the Integration Park and will open at the end of August.

The state provides various forms of support for the disabled, which, according to estimates, make up 2 to 8 percent of the nation's 5.5 million inhabitants. It reimburses the cost of crutches, wheelchairs, lifting facilities, elevators and cars, as well as contributes to gasoline, flat arrangements, clothing and hygiene.

This year, the state allocated more than Sk5 billion (€130 million) for this purpose. Almost Sk40 millions went to the projects of civic organisations and Sk75 million to social care.

"We think the support is insufficient," Labour Minister Viera Tomanová told The Slovak Spectator. "The offer of social services is still lower than the demand."

She admitted that rights' defenders have made a significant shift in integrating the handicapped into society.

The change in attitude towards the disabled is naturally reflected in society's mood. Few people would be surprised to see a handicapped person in the streets these days. The "healthy" go to see theatre performances featuring actors with hearing and mental disabilities and even wait patiently if their waiter is mentally retarded.

Cities, like Bratislava, support summer camps for mentally disabled children, during which they go for walks, visit galleries and take part in various competitions. The police in Levice employ the physically disabled to supervise the camera system, which leaves more policemen available to be out on the streets. To encourage regional governments to support the disabled, the Association of Towns and Municipalities organises the Oskar Without Barriers competition, which is in its third year.

Despite these ongoing activities, the integration of the disabled into everyday life still has a long way to go. Companies are reluctant to employ disabled workers, who only find work in the so-called protected workshops. And other barriers remain.

According to research provided by the Slovak Association of Physically Disabled in 2005, only a fifth of public school and cultural facilities are barrier free.

Sport facilities ranked highest, with 27 percent. Researchers say this is due to the number of sport playgrounds in the countryside, which remain problematic for people in wheelchairs. Cultural facilities with hotels and restaurants were below the one-fifth margin, which points to the limited cultural possibilities for the disabled and the "discrimination" against the, by rich hoteliers who ignore their needs.

Minister Tomanová said that helping the disabled would be an "integral part of the social policies" of the new government. The politicians will make it a priority to guard the "social carrying-capacity of reform changes".

According to Holland, it is difficult to predict how the new government will fare in regard to support for civil society development in general, and disability NGOs specifically.

"One thing that seems clear is that Slovak parties that resist civil society development seem to lose favour over time, even if they gain popularity for a moment. The disability rights movement currently has momentum in Slovakia, and it would be in this government's best interest to take advantage of that momentum.

"Virtually every Slovak citizen has been touched by disability in some way - a family member, themselves, a friend. That's a universal experience that no politician or government can afford to ignore."