The Theatre from the Passage (Divadlo z Pasáže), is the only professional theatre in Slovakia that offers performance opportunities for people with mental disabilities. It premiered its 12th play, Little Heaven (Nebíčko) in Banská Bystrica, on June 22. 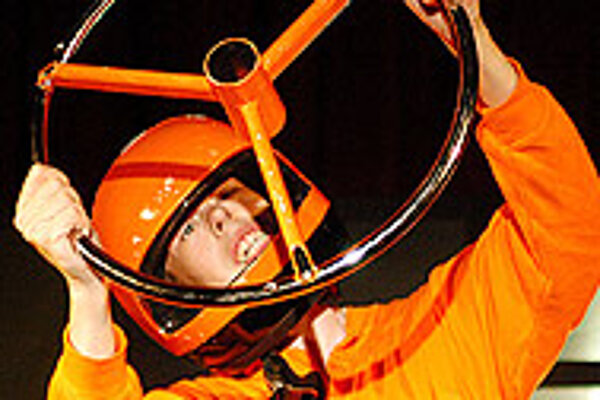 Font size:A-|A+  Comments disabled
The Theatre from the Passage (Divadlo z Pasáže), is the only professional theatre in Slovakia that offers performance opportunities for people with mental disabilities. It premiered its 12th play, Little Heaven (Nebíčko) in Banská Bystrica, on June 22.

The drama is set in a waiting room, in which nine men variously sit, walk, sing, dance, box, even drive a car as they talk about their views of the world, of life and of love.

Zuza Ferenczová rehearsed the one-hour play with all the males of the 15-member ensemble and with the help of German Barbara Kastner, one of the best known personalities in European community theatre. Little Heaven is a men's cabaret, a collage of short skits that examine the characters' views of the world and their problems.

"The show gradually developed into its final form during several months of talking among the actors themselves," theatre manager Eva Ogurčáková told ČTK news wire.

The Theatre from the Passage was not created as a social project for mentally challenged people but the directors and producers have discovered that these actors have a unique potential, which is difficult to find elsewhere.

Theatre director Viera Dubačová first took it on as an artistic challenge. "I wanted, with the help of mentally challenged people and through their world, to create a counterpoint to consumerism, which had already begun here in 1995. I took it on only as an artistic matter," Dubačová told týždeň weekly.

She reiterated that her theatre is not an institution for people unable to care for themselves. She claims the opposite, that the mentally challenged have much to offer to us, if we give them a chance.

The Theatre from the Passage does more than give its actors an opportunity to perform in front of audiences. It also provides protected housing as well as day-to-day training and activities for its mentally challenged performers.

Though the theatre has been in operation almost ten years, it almost collapsed last spring, mainly because of financial problems. However, the Theatre Institute Bratislava has taken the theatre under its wing, solving some of its problems at least temporarily.

However, the recent influx of money and support will not solve the theatre's long-term, operational problems. Since its inception the only theatre in Slovakia professionally working with mentally challenged people has been unable to obtain a stable continuing source of funding for its operations. As of right now, they're still looking.