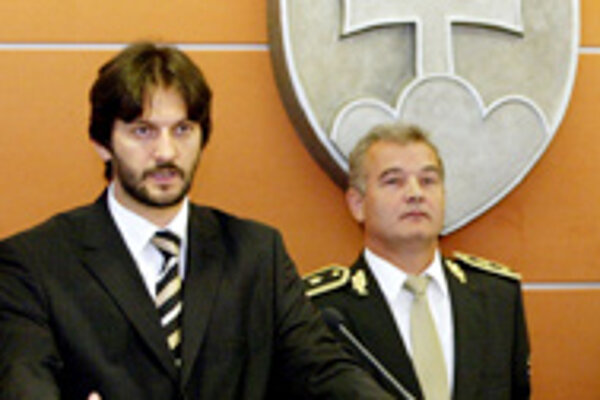 Slovakia's new police president is Ján Packa, the former head of the Office for the Protection of Constitutional Officials, who helped to secure safety during such events as the Bush-Putin summit that took place in Slovakia last spring and the visit of Pope John Paul II three years ago.

Along with Packa, two new vice presidents were named to their posts. They include Michal Kopčík, who in the past worked in the border and foreign police section in the eastern Slovak city of Prešov.

Another police vice president is Stanislav Jankovič, who worked as a deputy director of the Bratislava Regional Police directorate before taking up the vice president job.

The recall of Jaroslav Spišiak from the post attracted the most media attention and inspired speculation as to why the minister fired the policeman.

Although each interior minister has a right to nominate his own police officials, it was not clear whether Kaliňák would actually exercise that right as he has never been particularly critical of the police work, quite the contrary.

When explaining the dismissals on August 4, Kaliňák said that he had simply decided it would be the best answer to some of the current problems.

"I have followed the developments in the police force for the past four years and to improve its ability to flexibly react to the problems I decided that an exchange of management would help. Each police officer must work in several areas of police enforcement, and the previous officials stagnated in some of them, while in others they rested on their laurels or were more interested in keeping their jobs [than in doing real work]. They were competent in their jobs, but to stay at their posts, something more would be needed," said Kaliňák.

Kaliňák's predecessor was disappointed with the minister's decision.

According to Palko, Kaliňák did not act out of his own free will, but was forced to fire the officials. Palko alleged that Kaliňák acted under the pressure of Smer's coalition partners the Slovak National Party (SNS) and the Movement for a Democratic Slovakia (HZDS). Palko said that from his previous communication with Kaliňák he knew that Spišiak in particular was highly regarded by the new minister.

"Why did he dismiss him? Probably there have been some deals within the coalition council," Palko said adding that the new interior minister was "starting off very, very badly".

But while the opposition was disappointed with Kaliňák's decision, the coalition MPs welcomed it.

Ján Kovarčík of the Movement for a Democratic Slovakia said that he had expected the minister to make these changes much sooner.

"I evaluate the replacements positively. The new functionaries will have a new energy to effectively join the fight against crime," Kovarčík, who is also the deputy chairman of the parliamentary defense committee, said.

"SNS has had objections to Mr. Spišiak's work for a long time, not for professional reasons, but rather because of signs of extra political activity," Rafael Rafaj, the head of the SNS parliamentary caucus said.

According to Rafaj, SNS chairman Slota criticized Spišiak for organising a group to monitor him in Žilina. According to TASR Slota, who is also the mayor of Žilina, in December 2005 accused the Spišiak-led office for the fight against organised crime of setting up a group charged with collecting discrediting information on him in connection with the investment plans of South Korean car-maker Hyundai - Kia close to Žilina.

While the details of this issue remain unclear, Interior Minister Kaliňák hopes that the new top police officials will bring "fresh air to the police force".

"All three functionaries are [police] professionals and, as they say, they are married to their work," said the minister when introducing them to their new posts.

Among his initial goals at the police, Packa insisted that the officers must become action prepared and that the fight against extremism must also improve. Meanwhile, minister Kaliňák suggested that further changes in the police structure were ahead including personnel changes at some regional and district police headquarters.