Hope in sight for defrauded clients

NEW hope is on the horizon for those who lost their savings back in the late nineties to unlicensed deposit companies that promised unrealistic returns.
The Robert Fico government recently promised to reimburse a "select group of the clients", while saying very little about exactly how many would get how much, and how heavy a burden the reimbursement would put on the state budget. 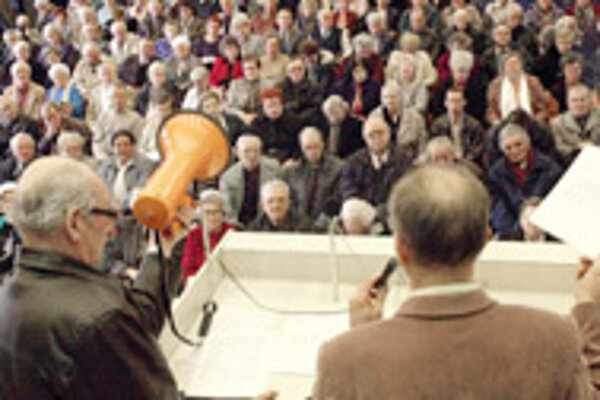 Font size:A-|A+  Comments disabled
NEW hope is on the horizon for those who lost their savings back in the late nineties to unlicensed deposit companies that promised unrealistic returns.

The Robert Fico government recently promised to reimburse a "select group of the clients", while saying very little about exactly how many would get how much, and how heavy a burden the reimbursement would put on the state budget.

The promise even made it into the government's official programme, which was approved by parliament last week.

Finance Minister Ján Počiatek says the reimbursement will be partial and that details will be discussed later.

In the late nineties, dozens of non-banking financial companies were operating on the Slovak market, as no legislation existed to curtail their growth.

The two most notorious fake money factories were Horizont Slovakia and BMG Invest, which, according to police estimates, lured about 300,000 clients, from whom they defrauded more than Sk20 billion (€530 million).

Many of the clients blamed the previous governments for allowing the firms to run for years without proper state supervision, and claimed they were entitled to compensation from the state budget.

The Association for the Afflicted Clients of Unlicensed Companies, formed by those who saw their money disappear along with the companies, says the Fico government's intention is just, pointing out that these deposit companies paid lavish taxes to the state.

"Finally, there is a government that wants to resolve this problem," the chairman of the association, Štefan Jagerčík, said.

Analysts, however, warn that the proposal would serve as a very bad and dangerous precedent.

Martin Chren, the director of the F A Hayek Foundation, says the reimbursement plan is indeed a move for populist gain and should not be mistaken as a social programme.

"It is a populist move to reward a certain sector of voters. Prime Minister Robert Fico mentioned, as quoted by the daily SME, that the afflicted are largely voters of his party," Chren told The Slovak Spectator.

According to Chren, the clients of these deposit companies were aware of the high risk.

"These companies promised unrealistic gains through very high interest rates. If the government reimburses their clients, in the future, people might get the impression that, even if they make risky investment decisions, the state will take responsibility for them and they might get reimbursed in a certain form," Chren explained.

Chren says the reimbursement pledge is in no way part of social policies.

"Court decisions have held the state simply does not carry responsibility for people's private investments. Now, the government plans to reimburse private investors for whom greed won over common sense," Chren concluded.

Former Finance Minister Ivan Mikloš told news television TA3 that it is unacceptable that 95 percent of the population should be expected to pay for the damages from the "very risky undertaking of a small percentage of people".

The finance minister in Mikuláš Dzurinda's first administration, Brigita Schmögnerová, had warned citizens against depositing their savings with these companies, as did the commercial banks. However, the critics of the government said the state should have implemented control mechanisms to regulate the operation of these companies. Over the years, the deposit companies invested huge sums into advertising their activities in Slovak media.

During the previous election term, the Slovak Communist Party (KSS) advocated the idea of reimbursing the people who got fooled by the companies operating on a pyramid game principle.

The proposal the KSS filed at the time would have cost the state over Sk3 billion.

Representatives of the current coalition have also called for reimbursing the clients of the companies under the Dzurinda administration, which has mostly been reserved towards the idea.

In 2002, criminal charges were filed against Jozef Majský, referred to as the richest person in Slovakia, Dávid Brtva and Patrik Pachinger for their alleged involvement in the collapse of unlicensed investment companies Horizont Slovakia and BMG Invest.

In 2005, the police wrapped up the investigation and charged Vladimír Fruni and Marián Šebeščák with fraud and establishing a criminal group.

The collapse of Horizont and BMG in February 2002 triggered the demise of several similar companies that had been promising huge returns on deposits.

Horizont and BMG together secured around 170,000 clients over five years, collecting a total Sk16.8 billion (€419 million).