SLOVAKIA is going to buy back the 49-percent stake in pipeline operator Transpetrol that crumbling oil giant Yukos bought for $74 million (Sk2.2 billion) in 2002. 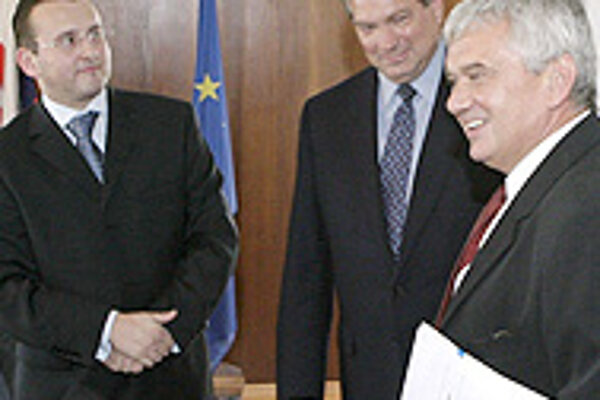 Slovak Economy Minister Ľubomír Jahnátek hammered out a deal at a meeting with representatives of the Yukos Finance BV on August 9 that states the company will sell the shares to the Slovak government.

"The Slovak government now accepts no other option than buying back the shares," Jahnátek said. According to the minister, if all the fine print is met, a very high probability exists that Slovakia will get the shares back.

This would add to the state's current 51-percent stake, thereby making it the sole owner of a strategically important energy company that supplies oil to the domestic market and to Western Europe.

Yukos has faltered since its founders, Russian oil tycoons Mikhail Khodorkovsky and Platon Lebedev, were arrested in 2003 for tax evasion. Since then, it has been selling off foreign assets not directly linked to its core business.

Neither the economy minister nor Yukos officials commented on how much Slovakia would have to put on the table in return for full control over the company.

According to Chairman of the Parliamentary Economy Policy Committee Maroš Kondrót, who was present at the talks, the bill could well exceed $100 million.

The government will initially reach into state coffers for the funds, Jahnátek said, adding that "the state will figure out how to compensate the budget later."

However, the government is also preparing a Plan B if the buyback fails and Yukos selects another buyer.

"The Slovak government would approve the transaction only if all its conditions are fulfilled, and one condition is to have a majority on the board of directors," Fico said.

Earlier in August, Slovakia's major oil refinery Slovnaft also eyed the Transpetrol shares and offered to support the Slovak government's efforts to buy the shares back.

"If the government doesn't buy the stakes, but enables third parties to enter the deal, Slovnaft is prepared to buy the shares on the same conditions as the state had," Slovnaft General Director Oszkár Világi told TASR.

Világi said Slovnaft would guarantee the state control over Transpetrol management and would offer to buy back 24-percent of the 49-percent over three years through options.

Many lost track of the shares' fate after Yukos Finance announced on June 12 that it was canceling a previous sale agreement with another Russian company, Russneft, which had been favoured to take over its Transpetrol holding.

Jahnátek said that some of these companies negotiated intensively with Slovakia, while others only said they were interested in the shares but took no action.

MOL's interest created especially intense speculation in Slovak media, since the company had wanted to buy Transpetrol four years ago. MOL is Yukos' biggest customer in the region.

However, at this point, the Slovak government is not considering letting a third party in on the transaction.

Yukos confirmed to The Slovak Spectator in March that it had sold its 49-percent stake to Russneft for $103 million (€87 million). However, Yukos officials changed their minds when the Slovak government, which has a veto on any sale of the shares until April 2007, opposed the deal.

On March 16, as required by law, Russneft announced its planned acquisition to the Slovak Antitrust Bureau, which approved it in May.

Opponents of the sale said it would make Slovakia more energy dependent on Moscow, an unpleasant prospect given Russia's recent use of energy to play politics with Ukraine. Also, if Russneft acquired the Transpetrol stake, it would gain a commanding position on the European energy market.

Ex-Prime Minister Mikuláš Dzurinda said in early March 2006 that he favoured vetoing the sale to Russneft. Malchárek has since said about the current deal that, unless there is a wide political consensus in favour of the Transpetrol transaction, he will not consent to it.

The Fico team has inherited these complications.

As an opposition party back in 2004 and early 2005, Smer opposed the presence of foreign companies in strategic Slovak businesses and approved of the plans to buy back the shares.

Analysts have been concerned all along that the shares could end up in the wrong hands, and become a tool for economic extortion.

Druzhba was built on Slovak territory between 1960s and 1970s. It starts in the Russian Federation and continues to the Czech Republic through Belarus, Ukraine, and Slovakia.