Full circle and full speed ahead

IT was as unbelievable as it was unforgettable. Just weeks after completing his studies in Prague and Vienna, conductor Oliver Dohnányi was auditioning for a spot on the podium at the Slovak Radio Symphony Orchestra (SRSO). 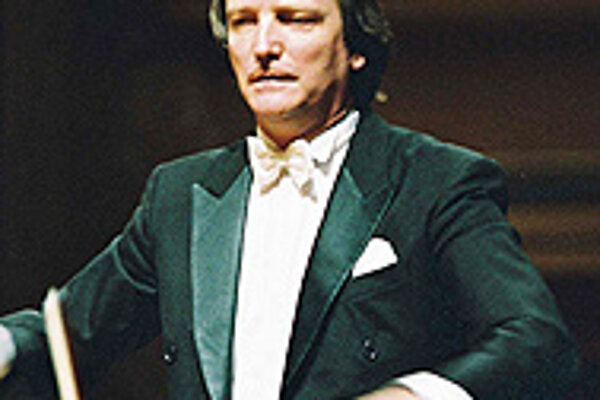 Font size:A-|A+  Comments disabled
IT was as unbelievable as it was unforgettable. Just weeks after completing his studies in Prague and Vienna, conductor Oliver Dohnányi was auditioning for a spot on the podium at the Slovak Radio Symphony Orchestra (SRSO). The orchestra was under the legendary Ondrej Lenárd at the time, who was thrusting it to new heights, and the competition for the position was presumably fierce. But in the end, Dohnányi seized the moment, landing himself a position that would set him on the path from ambitious upstart to future maestro.

"It was a huge step," Dohnányi recalled for The Slovak Spectator. "I was extremely excited."

Now, almost 30 years later, the Prague-born conductor, who one reviewer jokingly referred to as a "blond John Cleese", has come full circle. After earning a position at the Slovak National Theatre in Bratislava, touring with the Slovak Philharmonic and serving as principal conductor of the National Theatre Opera in Prague, he is back at the SRSO as its new principal conductor.

He was selected in July from among 19 other accomplished applicants from Slovakia and abroad, including Asia, North America and Europe. It was Dohnányi's personality, experience and rapport with the orchestra that sealed the deal.

"His reputation precedes him, and the orchestra understands him," Slovak Radio's Programme Director, Ľuboš Machaj, said, adding Dohnányi boasts the requisite authority to lead the ensemble.

For Dohnányi, attaining the post was a professional, as well as personal, goal.

"This orchestra and I know each other very well, and I wanted the balance in my career of conducting both opera and symphony."

There's no doubt his credentials live up to his reputation. His musical interpretations are widely respected among critics; his conducting is constantly in demand throughout Europe and the Far East, with the Yomiuri Nippon Symphony Orchestra in Tokyo; and his festival productions - such as his staging of Smetana's The Bartered Bride for Opera North in Leeds, England, which won the award for Best British Opera Production of 1998 - have received international acclaim. With so much success, why not work abroad?

"It's an interesting question," he said, "but there are a few reasons. I'd like to stay near my family, which live in Germany and Slovakia. Also, a sense of patriotism, that I should work in my homeland, and the opportunity to turn around the Radio Symphony Orchestra."

As the country's first professional music ensemble, the SRSO took on the role of promoting music by the three giants of the 20th century: Eugen Suchoň, Alexander Moyzes and Ján Cikker. Under the leadership of legendary conductors such as Oskar Nedbal, Ľudovít Rajter and Ondrej Lenárd, it grew in influence, made numerous impressive recordings and established itself as an international presence.

But as radio has fallen behind television and the Internet as a medium through which people find entertainment and education, so too has the SRSO.

"The orchestra has not been seen lately," Dohnányi noted. "It's hidden behind the Slovak Radio building, and I'd like to change that. I'd like to see it be more like in Prague, where the Radio Symphony Orchestra is doing very well as one of the best orchestras in the country."

Such tasks are often easier said than done, but Dohnányi has a vision.

"We need to create our own public, and that is accomplished through being constantly in the public eye, through subscription concerts and by presenting a dramaturgical interpretation that's unique to us."

Part of that vision, of course, includes the music the orchestra will perform. Dohnányi is an acclaimed interpreter of Verdi operas, but actually has his heart set on another 19th-century Romantic: Brahms.

"[Former principal conductor Ľudovít] Rajter was a specialist in Brahms symphonies and I'd like to bring them back into the repertoire. Judging from the reaction during Rajter's tenure, they will be very successful. In addition, the music of Central Europe is important, for the sake of regional cultural heritage."

And when it comes to contemporary music, which is often less accessible than the usual classical crowd-pleasers, Dohnányi acknowledges radio has been its most important transmitter, and is determined to see it once again promote contemporary Slovak composers.

"We have a duty to do it," he stated firmly. "Otherwise, who should play Slovak composers if not the Slovak Radio Symphony Orchestra?"