SLOVAKIA's deputy PM for human rights and minorities, Dušan Čaplovič of the left-wing Smer party, recently surprised his cabinet colleagues by announcing he would welcome the introduction of same-sex registered partnerships in Slovakia. 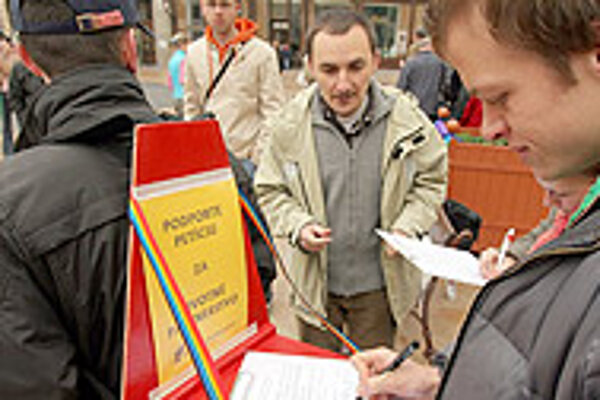 "I am personally in favour of adopting such a law," Čaplovič said in an interview with Slovak Radio on August 11, although he added that he was not in favour of allowing such couples to adopt children.

"Should NGOs and society reach a consensus, I am willing to prepare such a law in cooperation with their [same sex organizations'] representatives," Čaplovič said.

Hana Fábry, the spokeswoman for the Inakosť [Otherness] initiative, an umbrella organization for homosexual groups in Slovakia, told The Slovak Spectator that her organization was optimistic and hoped that "the law will be approved as soon as possible.

"Even if we do not manage to pass such a law during this government's term, we will not be put off. But we believe we can achieve it," she said.

Inakosť earlier sent an open letter to the government calling on ministers to fulfil their program manifesto with "real deeds" and eliminate all forms of discrimination.

The group also gave credit to the cabinet for its promise to "take steps towards the elimination of all forms of discrimination on the basis of sex, religion, race and sexual orientation".

Fábry noted that the current government is the first in Slovakia to have explicitly committed to protecting the rights of homosexuals.

But given that Smer's coalition partners, the far-right Slovak National Party (SNS), and the Movement for a Democratic Slovakia, are against making such changes, it is unlikely that Čaplovič's announcement will bring results soon.

"The SNS rejects registered partnerships," party MP Rafael Rafaj told The Slovak Spectator on August 14. "Our stance is based on our conservative Christian values, according to which marriage, as well as partnership, union, and co-existence, is between a man and a woman, who create a family.

"The SNS expects that we will start to catch up with the EU in areas that are more profitable for society, such as building a knowledge-based economy, and that this government will come up with a plan to support the nation's birth rate, which is in red-alert numbers," he said.

The HZDS also remains reserved on the issue of registered partnerships.

"Nothing prevents same-sex partners from living in these relationships, and there are already laws on the books that can resolve their problems as well," said HZDS Deputy Chairman Milan Urbáni.

Slovak President Ivan Gašparovič also suggested that Slovakia had more pressing matters to deal with, following a meeting with Čaplovič on August 14.

Čaplovič insisted, however, that it was a "natural right" of same-sex couples to be able to live together under the same conditions as other couples, and that no group of citizens should be pushed to the outskirts of society.

Same-sex registered partnerships would give homosexuals some of the same rights as are enjoyed by heterosexual marriages. Currently, homosexual partners must conclude a series of civil contracts between themselves to be granted the same rights as regular spouses. Many rights that are taken for granted by heterosexual partners are not available to gays and lesbians, including the right to obtain health information about their partners from hospitals. In Slovakia doctors may give out such information only to family members.

According to Fábry of Inakosť, Slovakia lags far behind other developed countries in registered partnerships (some 24 countries worldwide have or are adopting some form of legislation legalizing such partnerships). Fábry blamed the situation on "political elites, such as the hardliners from the [former ruling Christian Democratic Movement] KDH who have held influential posts in Slovak politics for many years".

When former KDH leader Ján Čarnogurský was Slovakia's Justice Minister in the 1998-2002 Mikuláš Dzurinda government, he became famous for the phrase "as long as I am justice minister, there will be no registered partnerships in Slovakia".