Thanks, and take care

A SMALL-town cop with integrity but few powerful friends, Jaroslav Spišiak seemed born to lead Slovakia's fight against organized crime as vice-president of the police corps from 2001 to 2006. His dismissal with the rest of the police brass at the beginning of August was a tawdry end to an inspiring exception in Slovak law enforcement - a man willing to take both personal and professional risks to get the bad guys. 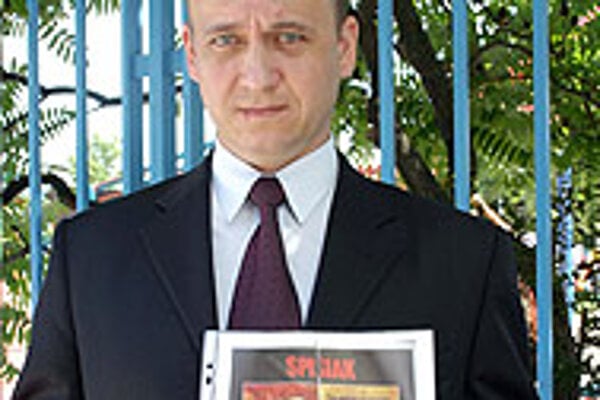 Font size:A-|A+  Comments disabled
A SMALL-town cop with integrity but few powerful friends, Jaroslav Spišiak seemed born to lead Slovakia's fight against organized crime as vice-president of the police corps from 2001 to 2006. His dismissal with the rest of the police brass at the beginning of August was a tawdry end to an inspiring exception in Slovak law enforcement - a man willing to take both personal and professional risks to get the bad guys. He now returns to civilian life to face the consequences of his public service.

When this newspaper first interviewed Spišiak in 2002, shortly after his recruitment to Bratislava from the boonies of Dunajská Streda, he recalled having been infuriated in elementary school by the swaggering of the class bullies, all of whom were bigger and tougher than he, as well as by his inability to do anything about it.

It was unclear then whether this information was being volunteered as a random memory or as an explanation of his motives for becoming a policeman, but as the years went by, it seemed that his position as the country's main anti-mafia crusader indeed offered Spišiak a chance to finally revenge himself on the thugs. He often spoke with disgust about how Slovak underworld figures tended to be revered in their communities as rascals with good hearts, rather than ostracized as the murderers and parasites they were (Banská Bystrica underworld boss Mikuláš Černák, for instance, enjoyed a popular reputation for giving free coal to pensioners to heat their houses in winter). In the last interview he gave before leaving office, published in the August 11 edition of the Plus 7 dní weekly, Spišiak took a final poke at his foes: "The underworld, and those who play a part in it, are dirty and insignificant rats, and they attack only when they're backed into a corner and don't know how to get out." Brave words for a man who had just lost even the meagre protection his badge afforded.

For many government politicians, Spišiak was too outspoken by half. Even former Finance Minister Ivan Mikloš, normally restrained in his pronouncements, couldn't contain his irritation with the police VP in December 2004 when interviewed by The Slovak Spectator: "I think we've seen more media work than case work from some police officials, and I would welcome a return to the business of the police, which is catching criminals," he snapped.

Of course, Mikloš belongs to the SDKÚ party, one of whose MPs, Libuša Martinčeková, had been arraigned that year in Spišiak's bust of an oil import fraud gang, 84 of whom ended up in custody. But cries of "who will rid me of this turbulent priest" rang throughout the political spectrum, particularly after Spišiak's 2004 assertion that the mafia had "tentacles" in the Slovak parliament. The only reason he managed to last so long was that, as a native of the ethnic Hungarian south, he had the support of the former ruling Hungarian Coalition Party (SMK), as well as of his boss, former Interior Minister Vladimír Palko. Once the far-right Slovak National Party (SNS) came to power in July, Spišiak's days were numbered, even if he hadn't become a thorn in less bigoted political backsides.

Then there were the state prosecutors, and especially the Attorney General's Office (AGO). In Slovakia, to get a criminal case to trial, the police are beholden to the independent corps of prosecutors, who must agree with the police view that a crime was committed before letting it proceed. Spišiak had terrible problems getting some of his highest-profile baddies to court, such as seven members of the Takáč organized crime group in Bratislava, who had charges against them dropped in December 2005 at the order of the AGO on the last possible day before they were to go to trial on money laundering charges. Attorney General Dobroslav Trnka, in a hideously cattish remark, added that he "wasn't surprised" that Spišiak didn't understand his reasoning for releasing the "alleged" criminals.

Spišiak faced the same kind of sniping from within the police corps itself, such as from Jozef Šátek, the former head of the anti-corruption division, who after he was fired in January 2005 actually kept up a blog on the SME daily paper website slagging Spišiak for his allegedly yokellish approach to policing.

Last, but definitely not least, were those "dirty and insignificant rats", the Slovak mafia, who according to Spišiak tried to murder him three times during his tenure, and who called on all their media, political and judicial sector friends in a fruitless attempt to entrap him or make him look like a chump. Jaroslav Spišiak never went to parties, never owned a company, and never got involved in politics. He did his job and went home, offering as small a target as possible.

The last time I visited him, in early July, Spišiak had just received another ostensible mafia threat, the kind that sends chills down your goosebumps. It was typewritten on the back of one of those animated greeting cards, "A Present for a Good Boy on His 7th Birthday", and purported to be from the entourage of former Bratislava mafia boss Peter Čongrády, who was shot dead in 2004. "You'll be gone soon, back to your little flat, and we'll be waiting," the card said. "When our boss gives us the word, we'll break you like glass." And so on in gloating detail.

Jaroslav Spišiak was sometimes dismissed as a camera-struck grandstander, or as a bumbling country cop out of his depth in The Big City. But as that card made abundantly clear, Spišiak was neither vain nor incompetent. Had he been so, he could never have lasted five years in the hot seat, nor inspired such bloodcurdling threats.

A loner he was, but not of the consciously heroic variety. The point of all the press conferences was to put a face on the anti-mafia campaign, to encourage faith among both rank-and-file cops and the public that organized crime was being taken seriously, and even, as I witnessed on one occasion, to give ordinary citizens someone to turn to as a last resort if they were in trouble.

For all his battling-the-bullies image, in private Spišiak was increasingly troubled by his growing isolation, and in the years after his allegations of a mafia presence in parliament seemed in an almost permanent funk. "It's as if I hit a lion on the head but didn't kill it," he said on more than one occasion. "All I can do now is try and stay out of his way."

Spišiak's lion finally caught up with him on August 5, when he was fired by incoming Interior Minister Robert Kaliňák. His end was surprisingly painless, with both sides exchanging compliments, and few regrets expressed except in reaction strings to web reports. Whether it will remain so - whether that dire letter will be followed by some act of thuggish revenge - is now entirely up to the bullies that Spišiak spent the last five years confronting in all of our names.

For that five years of selfless service, he deserves our humble thanks. For the next months of uncertainty that await him and his family, he has our sympathy and deepest concern.