THE BARRAGE of insults between Slovak and Hungarian nationalist extremists shows no sign of letting up. Following the publication of a video showing the burning of a Hungarian flag on an Internet website, pictures of Hungarian fans flaunting anti-Slovak banners at football matches in Budapest were published by the Slovak media. 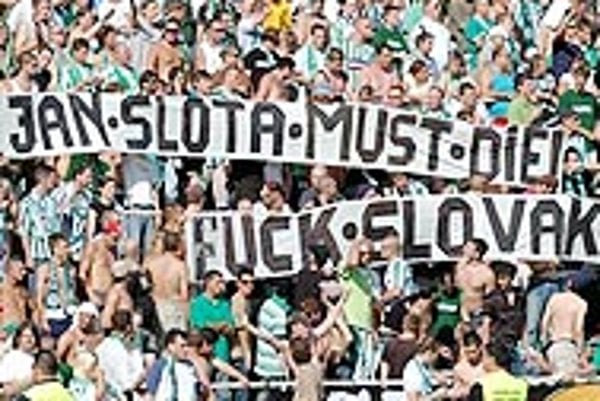 Font size:A-|A+  Comments disabled
THE BARRAGE of insults between Slovak and Hungarian nationalist extremists shows no sign of letting up. Following the publication of a video showing the burning of a Hungarian flag on an Internet website, pictures of Hungarian fans flaunting anti-Slovak banners at football matches in Budapest were published by the Slovak media.

Ján Slota, the head of Slovakia's far-right Slovak National Party (SNS), a member of the ruling coalition, is infamous for his anti-Hungarian slurs, and has recently used his position in the administration to further inflame tensions with Budapest.

A banner displayed at another match proclaimed: "Slovaks, you will forever be our slaves".

The images caused a wave of indignation among Slovak politicians, and sparked concern that such isolated expressions of intolerance masked a more general increase in ethnic tensions between the two countries.

According to Grigorij Mesežnikov, the head of the Institute of Public Affairs think tank, expressions of extremism have become more frequent since the formation of the new Slovak government.

"The presence of the SNS on the political scene creates fertile ground for such expressions on both sides. Unfortunately, many people still respond to such expressions of nationalism, and some extremists now feel a greater legitimacy to express such feelings," Mesežnikov told The Slovak Spectator.

"Relations between Slovakia and Hungary have been unstable in the past, and it was only a question of time and of the presence of the SNS in the Slovak government before such issues returned to the surface," agreed sociologist Pavel Haulík from the MVK polling agency.

While politicians on both sides tended to play down earlier incidents, the recent exchange brought a firmer response.

After the Hungarian flag-burning incident, Hungarian diplomats called on the Slovak authorities to take a firm stand against such expressions of hate.

In response, Prime Minister Robert Fico and Foreign Minister Ján Kubiš attended a celebration of Hungary's Constitution Day at the Hungarian Embassy in Bratislava, while Deputy PM for Human Rights and Minorities Dušan Čaplovič sent a letter to the Hungarian ambassador, Csaba Gyorffy, saying that "politicians on both sides should tackle this problem rather than stir up tension and misunderstandings between Slovaks and Hungarians".

"Even if the shared history of Slovaks and Hungarians has been scarred by many tensions and misunderstandings, politicians have a duty to treat these historical wounds, rather than make them worse," stated the letter.

The Sme daily reported on August 24 that Slota had also been required by his coalition partners, mainly Fico, to undertake a "gentleman's agreement" not to say anything that would embarrass Slovakia abroad.

Following the banners incident at the Budapest football grounds, however, Slovak politicians were not so cap-in-hand.

The ruling coalition Movement for a Democratic Slovakia (HZDS) called on Hungary "to apply the same principles domestically that it applies in national policy issues on the international stage.

"We believe that such expressions do no good to neighbourly relations. On the contrary, they serve those who seek to disturb the mutual co-existence of Slovaks and Hungarians," the HZDS said in a statement.

SNS deputy leader Anna Belousovová said she was shocked at the sentiments directed toward Slota, saying she could not imagine who might hate "the chairman of a patriotic and now also a ruling coalition party so much as to want to see his death".

Even Béla Bugár, leader of the opposition Hungarian Coalition Party in Slovakia, got in on the act, saying he would ask for a meeting with Deputy PM Čaplovič to tell him about acts that had occured against ethnic Hungarians in southern Slovakia.

"We can't wait for the first punches to fly or allow passions to escalate further," he said.

"The government believes it is important to emphasize that it regards any expression of hatred towards foreigners as unacceptable," said Hungarian Foreign Minister Kinga Göncz.

Haulík said that while the presence of nationalists in the Slovak government was certainly not helping things, a large part of the current tension was due to the fact that Slovakia and Hungary had failed to discuss and "draw a thick line" over past conflicts between the two nations.

These conflicts, he said, were still giving rise to feelings of injustice on both sides.

"Hungarians still resent the Treaty of Trianon while Slovaks feel wronged by the long period of Magyarization," Haulík said to The Slovak Spectator.

The Treaty of Trianon, signed on June 4, 1920, set new borders for Hungary after World War I and cost the country much of its former territory, including large chunks of Romania and Czechoslovakia.

Up to that time, Slovakia had been part of the Austro-Hungarian Empire, and as such, along with other nations that belonged to the monarchy, they were forcibly assimilated, or "Magyarized". Only Hungarian was spoken in schools and public bodies, and it was not until the 19th century that the first Slovak national revival leaders appeared.

According to Haulík, the past wrongs on both sides have never been properly dealt with, and while on the surface relations seemed calm under the previous government of Mikuláš Dzurinda, "latent tensions have always been present".

Haulík said that while the current tensions were unlikely to escalate into a more serious conflict, both states, including their intellectual elites, had to become more active in bringing unresolved issues to the table and achieving closure.

"Compromises and open communication will be required on both sides. This problem has not appeared just because the SNS is in the Slovak government right now. It's a latent historical problem that has never been resolved between the two nations," Haulík said.