DESPITE having lost a private investor on August 16 after the Fico government promised to scrap a privatization contract with the TwoOne consortium, Bratislava's M. R. Štefánik Airport is going ahead with plans to reconstruct its terminal, increase parking and more than double transit capacity by 2009. 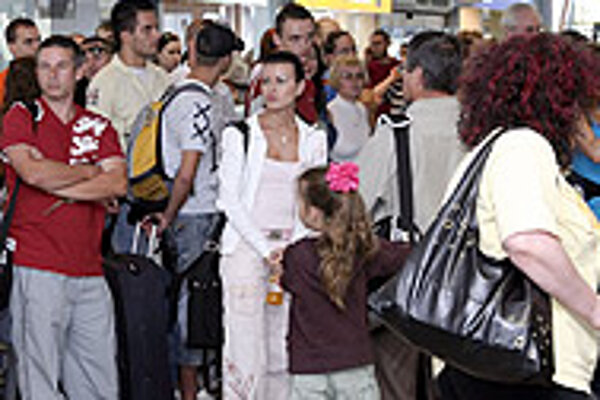 Font size:A-|A+  Comments disabled
DESPITE having lost a private investor on August 16 after the Fico government promised to scrap a privatization contract with the TwoOne consortium, Bratislava's M. R. Štefánik Airport is going ahead with plans to reconstruct its terminal, increase parking and more than double transit capacity by 2009.

Jaroslav Mach, the airport's director of development, told the Sme daily that the facility would likely reach its capacity of 2 million passengers annually this year, and was considering taking loans on international financial markets to finance an expansion to be able to handle 4.5 million passengers.

"Few people will recognize the terminal building after its reconstruction," Mach said. "Given the age of the building, which was brought into use in 1971, it will have to be almost completely torn down."

Mach's intentions were confirmed by Transport Minister Ľubomír Vážny, who said on August 23 that the airport would not be sold to any private investor but would remain in state hands.

"Our ambition is to develop a business plan with airport management that would be capable of taking the airport to the same level as a private investor," he said.

According to Mach, the number of check-in desks will be increased from 19 to 40, and the services offered will be improved to include more shops and restaurants, as well as possibly a hotel and a business centre.

Although TwoOne planned to invest about Sk9 billion in the airport on top of the purchase price of Sk11.4 billion, its failure to secure the approval of Slovakia's anti-monopoly authority by a mid-August deadline gave the cabinet grounds to announce it was withdrawing from the sale.

The socialist Fico government is against the privatization of state assets in general and of Bratislava airport in particular, in line with its policy of keeping assets of strategic importance to the economy in public hands.

However, while TwoOne's investment plan called for only a minor expansion of the terminal costing Sk326 million, Mach said the airport's own plan called for Sk2.8 billion to be spent.

"We'll gain some time by expanding the terminal, and wait to see how passenger numbers develop. If needed, we'll build another terminal," he said.

Vážny, meanwhile, said the government counted on spending Sk3-4 billion by 2010, and that it would try to tap EU funds for at least part of the financing.

Mach said the airport would soon be announcing a tender for a company to build a multi-storey parking complex holding 600 to 1,200 vehicles, and would also be expanding the area of the aircraft park.

Within the next decade the airport will also likely have to invest over Sk1 billion in rebuilding its runways, which were last reconstructed in the 1980s. The operation will require that the airport shut down completely, as its runways overlap each other.

The overlapping design was intended to give aircraft a choice of landing path when approaching in high winds, but as modern aircraft are better able to deal with windy conditions, most newer facilities have parallel runways that can be upgraded without suspending traffic.