ALTHOUGH SEVERAL large housing projects are on the verge of completion in Bratislava, demand for apartments in the Slovak capital is not likely to be satisfied by these developments. In fact, say real estate experts, even all of the residential space coming on the market in the near future combined will not satisfy the relentless appetite among local and foreign buyers for quality housing. 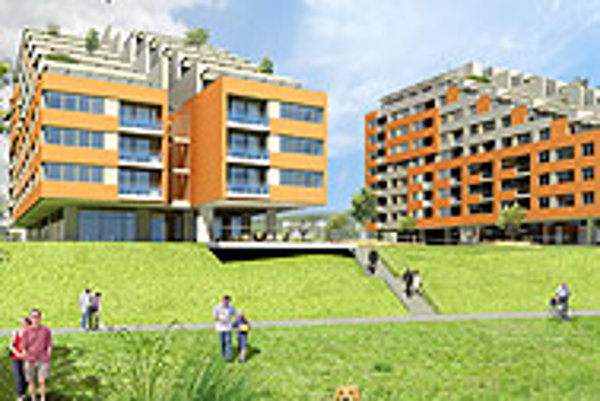 Font size:A-|A+  Comments disabled
ALTHOUGH SEVERAL large housing projects are on the verge of completion in Bratislava, demand for apartments in the Slovak capital is not likely to be satisfied by these developments. In fact, say real estate experts, even all of the residential space coming on the market in the near future combined will not satisfy the relentless appetite among local and foreign buyers for quality housing.

"Demand continues to exceed supply on the residential real estate market. Despite the number of [residential] projects that will be completed in the near future, there are new projects in preparation where the number of apartment units will be more than 1,000. One will even have more than 5,000 [units]," Filip Žoldák, a researcher and consultant with the Lexxus real estate agency, told The Slovak Spectator.

Žoldák said that the growing Slovak economy and the rising purchasing power of the country's inhabitants on the one hand, paired with the deteriorating state of old apartments on the other, suggests that demand for new apartments will not weaken in the foreseeable future.

"We estimate that the market is able to absorb another 30,000 apartments. At the same time, thanks to the growing supply of new apartments, we expect that the position of the buyer will be strengthened and that the quality of new buildings will improve," he added.

The number of new apartments financed through Tatra Banka's Housing Centres grew 118 percent year-on-year during the first seven months of this year, when more new apartments were sold than during the whole of 2005.

The difference in price per square metre between an old and a new apartment is currently very much influenced by location, Žoldák of Lexxus said.

In some areas, the prices of old apartments are virtually the same as those of new properties. "In Ružinov [a suburb of Bratislava], for example, the difference in prices for new and old apartments is minimal. On the other hand, the difference in Nové Mesto [a wealthier suburb of Bratislava] can be about Sk10,000 [per square metre], due to the luxurious projects on Koliba [an upscale neighbourhood in Nové Mesto on the hill overlooking Bratislava]," Žoldák explained.

Developers are currently offering new apartments in some of the larger residential projects in Bratislava for Sk40,000 to Sk50,000 per square metre, not including VAT. The price is much higher for luxury projects in the more attractive parts of the capital.

"There is already one luxury project on Koliba where the average price is around Sk90,000 per square metre," Žoldák said.

It is expected that the price of apartments in massive developments coming on the market before 2010, such as River Park and Eurovea on the Danube River in the greater downtown area, will surpass even the Koliba level.

After studying demand for new apartments in Bratislava, however, not all real estate professionals agree that prices will continue to rise. The Czech developer Finep is convinced that demand is being kept in check by high prices.

Blanka Illinová, business manager of Finep Bratislava, said that although demand for new apartments in Bratislava currently exceeds supply, several residential projects have not yet been fully committed or sold out. In some projects, she said, the inventory of unsold new apartments, including the most sought-after two and three-bedroom apartments, reaches 30 percent of all apartments.

"An incorrectly set price is usually the reason [that apartments do not sell]. In the majority of cases, the price of such apartments is over Sk70,000 per square metre, which is unjustified if the apartment does not have above-standard equipment and is not located in the city centre. As we are seeing, some customers are realizing that these units are overpriced, or that they just cannot afford such expensive housing," Illinová said.

The Finep manager said that many customers believe apartments that come with such high price tags include extras such as a receptionist, solar roof panels or anti-radiation shelters. However, such services are often not included in the sales price of each unit, and after people buy an apartment they find that these services are an additional expense.

"In Bratislava these days, architecture tends towards the pompous and to exceed the requirements of usefulness and purpose. Excessive luxury features are difficult to sell, and at the end of the day are impractical," Illinová said.

Data from the Statistical Bureau show growth in finished housing of 25 percent in 2005, with 14,863 apartments completed during the year. There were 19,796 housing starts in 2005, for a total of 48,874 units that are currently under construction.

The housing boom remains concentrated in the economically stronger parts of the country, such as Bratislava region, which saw the highest number of new housing units (4,673) built last year, followed by Trnava region (2,055). The least new housing was built in Banská Bystrica (772) and Košice (944) regions, according to the Statistics Bureau.

Laurie Farmer, founder of the Bratislava-based Spiller Farmer real estate consultancy, told The Slovak Spectator in an earlier interview that if Slovakia wanted to catch up with the 2000 EU average of 400 apartments per 1,000 people, it needed to build 25,000 apartments per year.

At the current pace of housing construction, by 2010 Slovakia could still be 135,000 apartments behind the EU average.