LOCAL governments near Bratislava do not begin debating where to build a ring road bypassing the Slovak capital until September, but already it is clear they will face determined opposition from civic groups and environmentalists across the Záhorie and Small Carpathians regions. 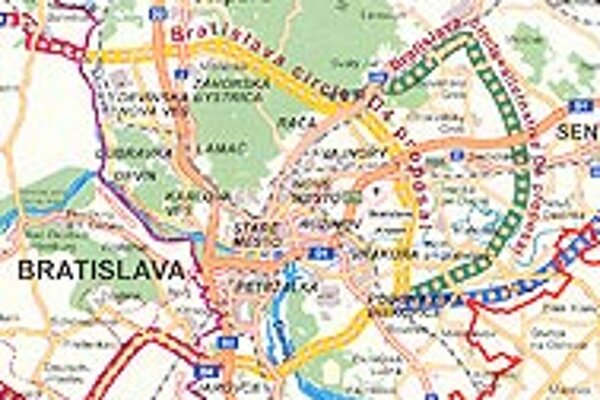 Font size:A-|A+0
LOCAL governments near Bratislava do not begin debating where to build a ring road bypassing the Slovak capital until September, but already it is clear they will face determined opposition from civic groups and environmentalists across the Záhorie and Small Carpathians regions.

The ring road is to be part of a north-south European road transport corridor from Sweden to the Black Sea, and is expected to cost €1 billion, financed by the European Union. It promises to keep heavy vehicles out of the city core, but at the cost of endangering historical assets and natural reserves in surrounding districts.

"Everyone is mainly concerned not to have the freeway go through his backyard," said Ľubica Trubíniová, the head of Greenpeace in Slovakia.

"Transit vehicles should bypass Bratislava, but not through protected areas."

There are three routes being considered. The first two lead from the Austrian S8 freeway through Marchegg to Stupava and Borinka in Slovakia and then over the Small Carpathians to the Vajnory suburb in northeast Bratislava. From there the first route drops south to Rovinka and then west to Jarovce to hook up with Austria's A6 freeway; the second, longer route would head northeast from Vajnory to link up with Pezinok, and then drop down to Rovinka and the A6.

Both ring road options would threaten the Pajštún castle near Borinka and the Šúr wetlands reserve between Vajnory and the town of Svätý Jur.

"We have beavers and foxes living here," said Jana Trebitická, a resident of Borinka. "We don't want the freeway here, and if we need to we'll get up a civic initiative."

A third, less invasive bypass would tie the A6 through Rovinka to Senec and the D1 freeway to Žilina, but at the same time would not relieve the traffic situation in Záhorie and the Small Carpathians.

"Our aim is to meet all the heads of the regional governments involved in Poland in the next few weeks to ensure that Bratislava is not left out of this [European transport] corridor," said Vladimír Bajan, the chairman of the Bratislava self-governing region, following his meeting with Transport Minister Ľubomír Vážny on August 11.

The government is to discuss the ring road this fall; construction is not expected to begin before 2010.