An Irishman finds his "roots" in Slovakia

JACK CAREY has found his new home in Štúrovo, a little town in southern Slovakia, on the banks of the Danube. And with him he has brought hurling, an ancient game that is an integral part of the Irish identity. As The Guardian wrote, for the Irish, hurling is "a kind of religion, philosophy, music, bread of life". Irish fans say it is a game that combines the beauty of dance with the raw physicality of a barroom brawl. 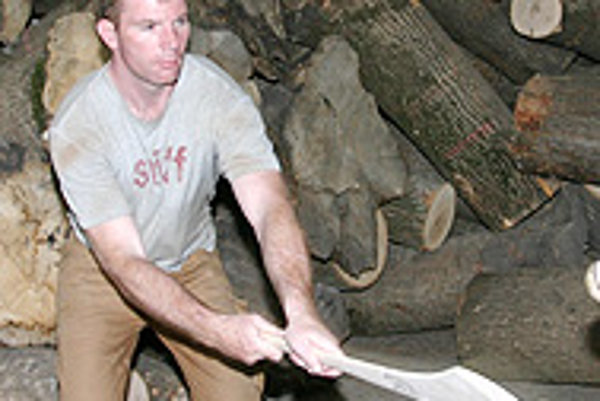 Font size:A-|A+0
JACK CAREY has found his new home in Štúrovo, a little town in southern Slovakia, on the banks of the Danube. And with him he has brought hurling, an ancient game that is an integral part of the Irish identity. As The Guardian wrote, for the Irish, hurling is "a kind of religion, philosophy, music, bread of life". Irish fans say it is a game that combines the beauty of dance with the raw physicality of a barroom brawl.

Carey is a member of the Kilkenny family, legendary Irish hurlers, and his brother, Denis Joseph Carey, was once the most popular player in Ireland. DJ Carey played for Kilkenny, a top team in Ireland along with Cork, bringing his team to the finals 8 times in his 13-year career, and winning the top championship 5 times. A video detailing his career was the best-selling sports video in the country. Although hurlers are sports legends in Ireland, they do not become superstars like other top sportsmen, and often continue to live in the towns they grew up in, among the people they have always known.

Hurling is best described as a rough-and-tumble game similar to ice hockey but played on a grass pitch larger than a soccer field. Fifteen players on each side play without protective gear, racing toward the opposing team's goal as they fling a ball slightly larger than a baseball from curved paddles called 'hurleys'. The object is to hurl the ball over the other team's crossbar or into their net.

The first written record of the game was in the 5th century, but it has been played since long before the arrival of Christianity to Ireland. By 1884, the Irish had claimed hurling as an official part of their identity, together with the Irish language and traditional Irish music and folk dances.

Because they take so much abuse, hurleys must be made from a very particular type of wood. Although it's hard to find, the root of the ash tree makes the best hurling stick, because of its natural curve and strength. Having exhausted the supply in Ireland, the Carey brothers began to import it from Sweden. But quantities were small, and it wasn't long before they had to look elsewhere. And this is where Slovakia enters the story. Ash trees grow by rivers, and so Jack Carey began searching for ash near the second largest river in Europe, the Danube.

His efforts quickly met with success. Along the part of the Danube that forms the southern border of Slovakia, Carey found plenty of ash.

At first, Carey intended to export the wood to Kilkenny, where hurling sticks are traditionally manufactured, but then he thought - why not produce hurleys on site, in Slovakia?

He soon established a firm called Setanta - named after the first great Irish hurling hero - in Štúrovo, hired local employees and started his business. A breakthrough came when he made contact with the paper mill Smurfit Kappa Štúrovo this summer.

"You really have to have connections to do business here," Carey said. "Trying to do things on your own just doesn't work. This partnership definitely saved my bacon."

Even so, the Slovak foresters had to be taught to pull the ash trees up by the roots, rather than cut them in the usual way.

"I need the root to get the curve in the grain of the hurley."

To help the employees to understand what they were making, Carey showed them videos of hurling games.

"They were absolutely amazed by the speed of it, the physicality, and the fact that players wear so little protective gear. It was great motivation for them," Carey said. "I think this is a good starting point for expansion. It's not a question of cheaper labour. Sourcing the right material is everything in this business. Most of the expansion will probably come from new technology. It's a pretty mechanised industry now, although the finish is done by hand."

Playing hurling in Slovakia? Not a chance. All hurleys are exported to Ireland, the home of this tough and beautiful game.