HANNA is a solitary young woman, and her colleagues don't like that. To make the hours at the plastics factory fly by, they chat while they work and lunch together, but Hanna keeps to herself. Perhaps it's because she's a foreigner, and hard of hearing. Or perhaps, as another character later says, it's because she just wants to be left alone. 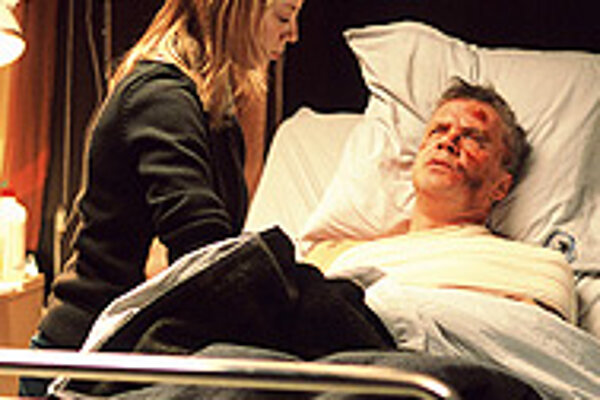 HANNA is a solitary young woman, and her colleagues don't like that. To make the hours at the plastics factory fly by, they chat while they work and lunch together, but Hanna keeps to herself. Perhaps it's because she's a foreigner, and hard of hearing. Or perhaps, as another character later says, it's because she just wants to be left alone.

Hanna is the main character of The Secret Life of Words, a stirring new film by Spanish director/writer Isabel Coixet and likewise-turned-producer Pedro Almodóvar. Like Almodóvar, Coixet's films are human dramas of the spirit and the heart, with all the subtlety and intensity of real life relationships. Her carefully drawn characters attract only the finest actors, who possess a command of nuance beautifully captured by the lens of her patient, deliberate camera.

In fact, subtlety and understatement are what make this film so intriguing. Early on, we see Hanna check into a hotel after her boss orders her to take a month's vacation, but we don't know why she frantically pulls the sheets off the bed the moment she arrives. Eager to get away, she takes a job caring for an injured worker on a oil rig.

The oil rig is a confined space populated with gentle misfits like Hanna. Each has a reason for wanting to be out at sea, distant from life and other people. Simon the cook (Javier Cámara) is a caring and generous guy who hasn't yet got up the courage to open his own restaurant; Scott (Danny Cunnigham) and Liam (Dean Lennox Kelley) are married family men secretly in love with each other; and Martin (Daniel Mays), an ocenographer, cares too much about the world to live surrounded by apathy or, worse, human cruelty.

Hanna is there to be a nurse to Josef (Tim Robbins), who was badly burned while trying to save a co-worker from a fire. Josef is talkative, but elusive, leading Hanna at first not to answer the personal questions he poses. But as she learns more about him, the truth about how the fire started and why Josef risked his life, she begins to respond to him. Josef is bearing an enormous burden of guilt, and he longs for a forgiveness he is afraid he doesn't deserve.

This actually pulls them together. I won't spoil the plot by revealing more, but Hanna also has a past she cannot reconcile herself to. Her deafness is actually psychologically induced, and she bears deep physical and psychic scars.

In the film's most compelling scene, she relates most of her story to Josef, although it is still so raw to her that she must tell it as though it happened to someone else. When she reveals her physical scars to him, bringing his hand to her chest to touch the wounds, he understands that what she has related was her own experience, and both break down in sobs.

Josef and Hanna become bound to each other. Both are carrying survivor's guilt - he as an offender, she as a victim - and each finds refuge in the other.

In the final moment of the film, Hanna's last, most awful secret is revealed, and the gasp from the audience was audible.

Robbins is good at playing simple men with troubled stares, as he did in his Academy Award-winning role in 2003's Mystic River. He makes Josef's compassion for Hanna sincere.

Polley gives an especially riveting performance as a woman damaged by and untrusting of a world that could be so brutal.

The film would have been slightly more believable if their relationship had taken longer to develop, and if the ending hadn't reached such an easy resolution, but the most admirable quality was that the film didn't patronise the audience. Characters were revealed through subtle dialogue and visuals, which made it many times more interesting than the usual story about two troubled people finding forgiveness through love.