ONE of the most interesting events to occur in the Old Town each summer is the Coronation Celebration (Korunovačné slávnosti), which will take place from September 1 to 3 this year. 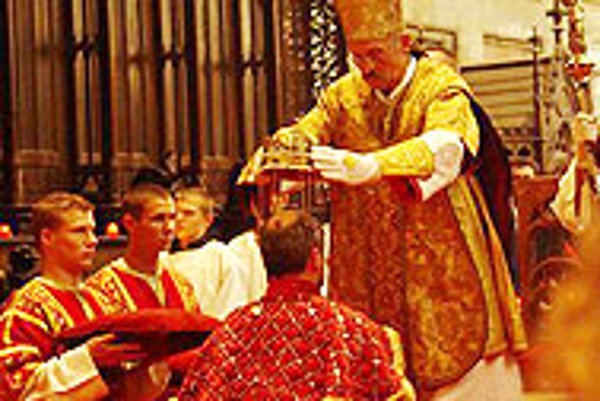 Font size:A-|A+  Comments disabled
ONE of the most interesting events to occur in the Old Town each summer is the Coronation Celebration (Korunovačné slávnosti), which will take place from September 1 to 3 this year.

The event recreates the atmosphere in Bratislava while it was the coronation capital of the Hungarian Empire from 1563 to 1830. During that period, 10 kings, 1 queen and 8 wives of kings were crowned in St Martin's Cathedral. Among them was the famous Maria Theresa, who was crowned in 1740.

The Bratislava Tourist Service first organised the Coronation Celebration in 2004 to give history lovers an entertaining forum for learning about the city's illustrious past. Each year, a different coronation is re-enacted. The ceremony takes place over the course of three days and is accompanied by period festivities, including dancing, music and wine tasting.

This year's re-enactment is the coronation of King Matthew II, who ruled from 1608 to 1619.

It all begins on September 1 with a rendition of Mozart's Coronation Mass at St Martin's Cathedral. This is in commemoration of the Year of Mozart, which marks the 250th anniversary of the composer's birth, and the 215th anniversary of his death.

The next day's event is a theatrical performance entitled In the Shadow of the Turkish Crescent, to be held at Bratislava Castle. The performance details the region's most important events of the 15th and 16th centuries, when present-day Slovakia was in between the encroaching Ottoman Empire and the Christian bastion of Vienna. Also told will be the story of the anti-Habsburg uprising led by Štefan Bocskay.

The last day holds the coronation itself, which will proceed as follows: Matthew II will be anointed with holy oil before receiving the coronation insignia from the archbishop. The ceremony will then pause for a moment as a set of fighters are knighted into the Order of the Golden Spur. It then resumes as Matthew II takes the official coronation oath while kneeling on a mound of earth that represents his homeland. Afterwards, he will be hailed as king.

This year's accompanying events include a presentation about the country's free royal towns and regions, a market of folk art and period crafts, wine tasting from the country's many vineyards, and an ox roast.

What: Coronation Celebration
When: September 1 to 3
Where: St Martin's Catheral and Bratislava Castle
For more information, visit www.bratislava-info.sk or call Tel: (02) 5464-1794.