Cabinet scraps health-care fees as some doctors vow to disobey

THE HEALTH care fees that patients were accustomed to paying every time they visited the doctor or stayed in hospital were abolished as of September 1 under a new decree by the socialist Robert Fico government. 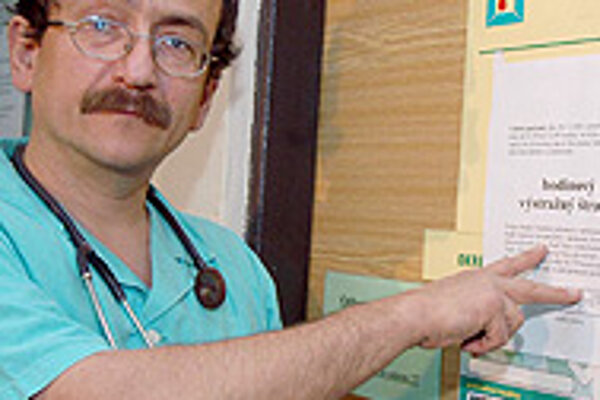 Font size:A-|A+  Comments disabled
THE HEALTH care fees that patients were accustomed to paying every time they visited the doctor or stayed in hospital were abolished as of September 1 under a new decree by the socialist Robert Fico government.

The cancellation of the nominal Sk20 and Sk50 fees, which were introduced by the previous health minister, Rudolf Zajac, as part of his right-wing government's reform of the health sector, had been among PM Fico's most public promises ahead of the June 17 general elections.

While the majority of Slovaks welcome the cancellation of the fees - a poll by RCA Research showed 61.8 percent support - the step has been criticized for leaving a billion-crown hole in the health sector budget, and for taking money out of doctors' pockets. It has also been defied, at least verbally, by one medical association.

Doctors have demanded compensation for the loss of the fees, arguing that without them the provision of health care could be endangered in some cases. Since their introduction, the fees have become a significant source of income for health care providers, helping them pay their regular bills.

The government agreed to compensate doctors for the cancelled fees, but said the money would come from the existing budgets of health insurance companies.

According to the Health Policy Institute's Peter Pažitný, the co-author of Slovakia's health care reform, eliminating the Sk20 and Sk50 fees will have several negative effects.

"First, there is the financial effect - health care providers will lose Sk1.5 billion, and if we also take into account the impact of [reducing the fees for drug] prescriptions, we have to add another Sk1 billion," Pažitný said.

As of October 2006, the fees paid by patients for every drug prescription are due to fall from Sk20 to Sk5.

In eliminating the health care fees the government has also done away with an important regulator of the public's consumption of drugs. Among the reasons why health care fees were introduced in the first place was to cut excessive drug use in Slovakia, where medicine had been free for generations, and doctors had become accustomed to over-prescribing for even minor ailments.

According to Pažitný, without the fees there will be nothing to regulate drug consumption, "which will eventually lead to increased expenditures on drugs - our estimate is another Sk1 billion".

Given the ownership of the largest insurers, the decision that the shortfall from the fees would be covered by the insurers was an easy option for new Health Minister Ivan Valentovič, himself the former head of Spoločná.

"The minister made his decision, and we simply had to go along with it," a source at one of the insurers told The Slovak Spectator on condition of anonymity.

It is estimated that doctors and hospitals collected Sk2-2.5 billion in health care fees. This sum must now be paid from regular insurance premiums.

According to Andrej Janco, the president of the Slovak Union of Medical Specialists (SLÚŠ), the use of insurance premiums to compensate for the scrapped fees could be regarded as "a misuse of public health insurance funds for the election campaign of a political party.

"If the government wants to exempt patients from paying the fees, the solution is to cover the fees from the government's budget reserves or from the state budget instead of from public health insurance," Janco said.

Janco announced that the SLÚŠ, which associates specialist doctors at over 600 outpatient clinics, had recommended that its members continue to collect the fees on a voluntary basis from patients.

It remains to be seen what impact the SLÚŠ appeal will have on its members. The Health Ministry has already called on the Slovak health care supervision authority, the ÚDZS, to monitor the situation, and has encouraged citizens not to pay fees even if asked by doctors.

"The Health Ministry recommends that patients not pay fees for health care services to specialist doctors as of September 1. If they demand the fees, people are advised to report it to the ÚDZS," said Health Ministry spokeswoman Silvia Balázsiková.

Doctors who continue to charge fees despite the cancellation and refuse to treat their patients unless they pay the fees will face strict sanctions.

"Should doctors refuse to treat patients or put some other kind of pressure on them by refusing to provide health care if they do not pay the fee, the ÚZDS will take the necessary steps, even up to taking away their medical licenses to practice," Balázsiková told The Slovak Spectator.

"Because neither the state nor municipalities but health insurers themselves require these statistics, it is natural that they also compensate doctors for the cancelled fees."

VšZP spokeswoman Petra Balážová told The Slovak Spectator on August 30 that her company had already earmarked Sk420 million for the fees for the period from September to December 2006.

"VšZP will cover the fees through increased enforcement in the area of premium collection. We will try to achieve better results on enforcing past claims," she said.

Despite cutting the doctor visit and hospital stay fees, the new government has kept other fees that were introduced by Zajac, such as the Sk100 charged per person who stays in hospital as a companion for another patient, or Sk2 per kilometre for transport by ambulance, and Sk150-220 per day on a medicinal spa stay.

The SLÚŠ' Janco said that instead of cutting the fees, the state should have increased them.

"The cancellation of the health care fees is an anachronism which only confirms the inability of the current government to grasp the way in which health care in Europe is developing," he said.

Janco added that health care fees were common across Europe, and that patients in other countries as a rule paid much more than "the miserable Sk20" that was charged in Slovakia.