The changing face of air travel

EVEN on a Sunday night, Bratislava airport is full of people - some checking in, some waiting for their flights, and others lounging in the arrivals hall. The difference from even a few years ago is striking, and it underlines a simple fact - without the low-cost airlines and their flights from Bratislava to cities around Europe, this place would be dead. 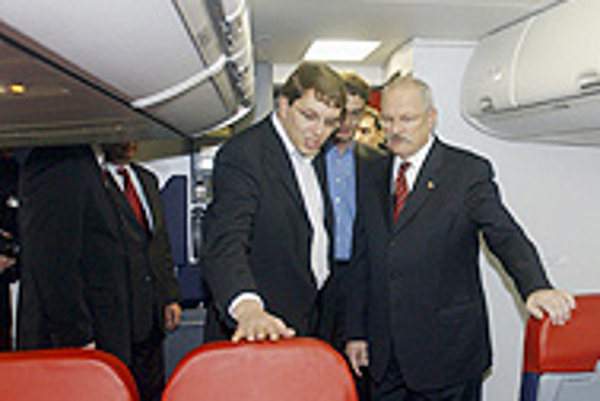 Font size:A-|A+  Comments disabled
EVEN on a Sunday night, Bratislava airport is full of people - some checking in, some waiting for their flights, and others lounging in the arrivals hall. The difference from even a few years ago is striking, and it underlines a simple fact - without the low-cost airlines and their flights from Bratislava to cities around Europe, this place would be dead.

According to the European Low Fares Airline Association (ELFAA), low-cost services in Europe currently account for around 30% of scheduled European air services, with ELFAA members carrying approximately 100 million passengers a year. All three of the low-cost airlines currently operating in Slovakia belong to this association.

"If you look at the situation in Slovakia, five years ago there were only charter airlines registered here, and there was no national airline," said ČSA's general manager for Slovakia, Jozef Bebiak.

But in February 2002, the Bratislava-based SkyEurope started flying from the Slovak capital to European destinations, changing the air industry in Slovakia and across the region forever.

By August 2006, SkyEurope was operating 73 routes to 37 destinations in 19 European countries. It is now the largest low-cost airline in Central and Eastern Europe with bases in Bratislava, Budapest, Warsaw, Krakow and Prague.

"SkyEurope was the first airline to bring the philosophy of low-cost flights to Slovakia. Before that, people either didn't fly at all or they used to fly from Vienna," said SkyEurope spokesperson Gabriela Horváthová.

The success of the first low-cost airline in Slovakia attracted other companies with similar philosophies. In November 2004 easyJet launched international flights from Bratislava, and in October 2005 Ryainair joined them. Because of the relatively low purchasing power of Slovak inhabitants, companies that offer cheap flights have an enormous edge over more traditional carriers, and even represent competition for bus and railway companies.

With the arrival of the low-cost carriers, Bratislava airport also experienced a rapid increase in the number of passengers it handles. In 2005 the average monthly increase over 2004 was 50,000, while from June 2005 to May 2006, over 1.6 million people came through the airport, three-quarters of them on low-cost airlines.

"According to a survey we carried out on board our aircraft recently, there is a balanced ratio of passengers coming from Eastern and Western Europe," said SkyEurope's Horváthová. "Our target group includes business passengers as well as those travelling for vacations or to visit a family living abroad."

Tomasz Kulakowski, sales and marketing director of Ryanair for Central Europe, agreed that low-cost airlines had changed air travel everywhere, not just in price-sensitive markets such as Slovakia. "Low cost airlines changed the travel industry around the world, and many people who always thought flying was too expensive can now travel for a fraction of the fares offered by such dinosaurs of industry as Lufthansa, Air France or British Airways."

Ryanair's average fare on the Bratislava to London route is €41 one-way, including all additional taxes and charges. To offer such fares low-cost airlines have to save money anywhere they can, especially on additional services on board. Meals, drinks, heavy luggage - everything now costs extra money.

It's a formula that has proved a winner for SkyEurope, which reported a 46 percent growth in passenger numbers in the second quarter of 2006, and welcomed its four millionth passenger on board.

The company also introduced the first 5 of its promised 21 Boeing 737-700 Next Generation aircraft to its fleet, raising it to 16 aircraft.

The airline managed to cut costs in the second quarter despite increased fuel prices, higher labour costs and major investments in the establishment of a new base in Prague. The new aircraft reduced fuel consumption and maintenance costs, allowing the airline to compensate.

According to Horváthová, the more flights the airline's planes make a day, the more efficiently the operational costs are distributed. "The most expensive plane is one that doesn't fly," she said.

Ryainair also uses new aircraft which burn up to 50 percent less fuel than older machines used by the traditional airlines, but Kulakowski said the firm had other ways of saving money as well. "We cooperate with hotel chains, car hire companies, and companies selling property; we offer advertising space on the largest international travel website. These create additional revenues, and thanks to that we can afford to offer cheap flights," he said.

The air industry in Slovakia has changed dramatically over the past four years, and in the view of the low-cost airlines, the importance of Slovakia, with its position at the centre of the continent and its catchment area including Vienna and eastern Austria, can only grow.