Drama, Mozart and a new building for the SND theatre

IN THE summer of 2004, the National Opera of Korea was at a crossroads. As one of the finest opera houses in Asia, its upcoming production of Verdi's Aida was sure to be musically brilliant, but some felt artistic interpretation had hit a plateau. 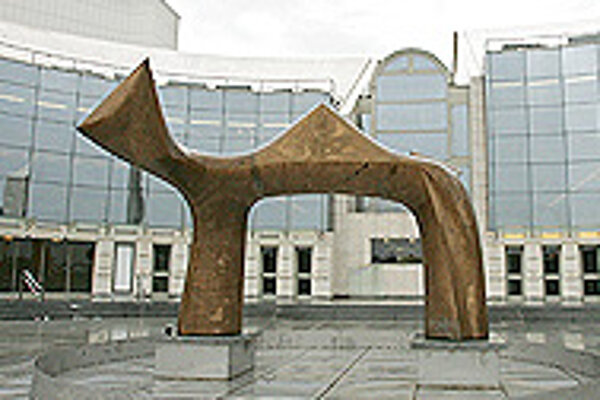 Font size:A-|A+  Comments disabled
IN THE summer of 2004, the National Opera of Korea was at a crossroads. As one of the finest opera houses in Asia, its upcoming production of Verdi's Aida was sure to be musically brilliant, but some felt artistic interpretation had hit a plateau.

"How come the atmosphere of opera never changes in Korea?" one reviewer sulked.

The solution came in the form of Swiss opera director Dieter Kaegi, who flew in to mount a production first conceived of for the Opéra de Monte Carlo. His words of wisdom: "Pay attention to drama rather than spectacle".

Kaegi is making his premiere at the Slovak National Theatre (SND) this season, and Slovakia's opera houses seem to be heeding his advice.

But a lot of stage time has also been alloted to Marián Chudovský, the current director of the SND Opera, who recently served several months as interim General Manager.

This October, Chudovský and renowned conductor Ondrej Lenárd will lead the SND's first premiere of the new season, a double bill of Mascagni's Cavalleria Rusticana and Leoncavallo's Pagliacci. Prime examples of the ardent verismo style, these operas have been paired since their original premiere in the 1890's.

Meanwhile, the Košice State Theatre will be commemorating the Year of Mozart, which marks the 250th anniversary of the composer's birth. In October, it will stage Die Zauberflöte and, in May 2007, a ballet based on Le Nozze di Figaro. That same month will also see a production of Donizetti's comic opera L'elisir d'amore.

December promises to be particularly exciting. The SND Ballet will present its annual performances of Luskáčik (The Nutcracker) and the Opera will premiere Martin a slnko, a children's opera by 20th century Slovak composer Tibor Frešo, directed by Pavol Smolík.

In Banská Bystrica, the State Opera will add some levity and laughter to the end of the year with a Slovak-language production of Strauss' sparkling operetta Netopier (Die Fledermaus). This matches the SND's revival of the genre in Lehár's Veselá vdova (The Merry Widow), which premiered last season and will return on December 31 to usher in the new year.

In the spring, the SND had planned to premiere Russian composer Modest Mussorgsky's colossal Boris Godunov, but the opera is now conspicuously absent from the schedule. If it does go ahead, Chudovský will be at the helm of this intriguing masterpiece about the Tsar who ruled Russia from 1598 to 1605.

Definitely set for April 2007 is the SND's premiere of Richard Strauss' Ariadne auf Naxos. This fascinating "opera within an opera" has two contrasting halves. The first is a comedy about a young composer's desperate efforts to get his operatic version of the Greek myth of Bacchus and Ariadne staged; the second is that romantic opera.

Ariadne retains a special place in the hearts of many Bratislavans because the city's "favourite daughter", soprano Edita Gruberová, made the opera a signature of her illustrious international career.

Dieter Kaegi, who has been working wonders as the artistic director of Opera Ireland for the last several years, will direct, with Austrian maestro Walter Kóbera conducting.

The end of the season presents three major events. In June, the Banská Bystrica State Opera will stage the 34th annual Zvolen Castle Games Festival, an opera and theatre festival held within the quaint atmosphere and resonant acoustics of Zvolen Castle. This year's programme includes the Slovak premieres of a range of Italian classics from the 18th to 20th century, including Verdi's early opera I Lombardi, Bellini's I Capuleti e i Montecchi, Puccini's Suor Angelica and Leoncavallo's Gli Zingari.

The State Opera will also host Tutto e Gioia, a competition among young opera singers from around the world, that includes excerpts from Bellini's La Sonnambula.

The SND's final premiere of the season is Verdi's Il Trovatore, directed by Martin Bendik and conducted by Ondrej Lenárd. This performance is widely anticipated as the first to be held in the new SND building, which is opening next year after 20 years of construction.