THE CULT musical Neberte nám princeznú (Don't Take Our Princess) is coming to the stages of Slovak theatres. On September 8 and 9, Slovak artists will be singing the unforgettable songs Tri Slová (Three Words), Šaty (Clothes) and others in a modern version of Snow White at the Nová Scéna theatre. 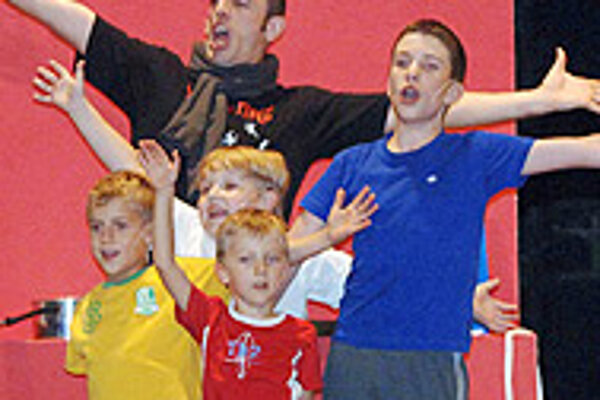 Font size:A-|A+0
THE CULT musical Neberte nám princeznú (Don't Take Our Princess) is coming to the stages of Slovak theatres. On September 8 and 9, Slovak artists will be singing the unforgettable songs Tri Slová (Three Words), Šaty (Clothes) and others in a modern version of Snow White at the Nová Scéna theatre.

Neberte nám princeznú began in 1981 as a television project by librettist Alta Vášová, composer Dežo Ursíny and lyricist Ján Štrasser, and was popular with several generations of viewers. The story is charmingly simple: Katka, a role played in the film by Marika Gombitová, is a girl from a good family who is beginning to feel confined at home. Her parents only want her to study to become a doctor. One day she meets a rebellious street urchin named Miro, played by Miro Žbirka. Her parents are against their relationship, so Katka runs away from home and finds refuge in an orphanage. Here, seven small orphan boys, who regard her as a princess, help her to hide. When her parents arrive to take Katka away, the boys try to keep her. Everything ends happily when the parents come to their senses and allow Katka to love Miro.

The storyline is not the only reason this musical became a cult film. The music of composer and musician Dežo Ursíny also played a major role. His music and Ján Štrasser's lyrics turned the songs in the musical into ageless hits.

Ursíny himself selected the actors to play Katka and Miro. "He was a maximalist, so he invited every known singer to audition," Vášová told the Hospodárske noviny daily.

For Marika Gombitová, still one of the most popular pop singers in Slovakia, the musical was the peak of her career. In the winter in 1980 she was involved in a serious car accident, which left her in a wheelchair. Although she returned to the studio after the accident, she gradually retreated from the scene, and her public appearances are now very infrequent.

The creators of the stage version of Neberte nám princeznú warn that what spectators will see on the stage will not be a copy of the film musical. The music remains the same, but director and choreograph Ján Ďurovčík had given the piece a modern facelift. The scene, costumes, and choreography will be set in the present day.

"We didn't want to make a replica of the 1980s musical because the older generation has the film so fixed in their heads that they would compare the two pieces. On the other hand, the younger generation would dismiss it as old-fashioned," said costume designer Ľudmila Várossová.