A MAN who served on the supervisory board of an arms trading company has been tapped to head up the National Security Bureau (NBÚ), a vital element in Slovakia's security apparatus.
František Blanárik, the former central secretary of the ruling Movement for a Democratic Slovakia (HZDS) party and a board member of the Petina International arms trading company between 2001 and 2002, has been nominated by the HZDS to lead the bureau. He is expected to be confirmed by parliament during its September session, replacing outgoing NBÚ Chairman Aurel Ugor. 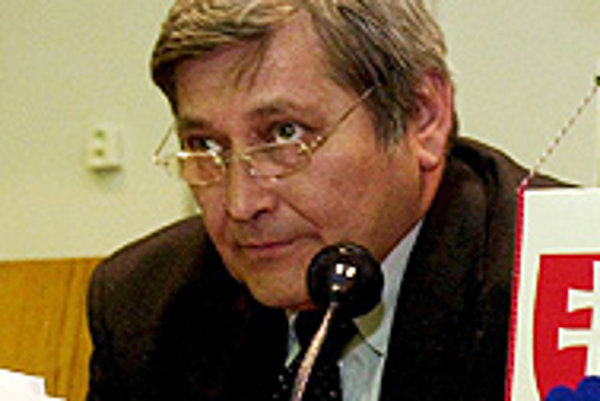 Font size:A-|A+  Comments disabled
A MAN who served on the supervisory board of an arms trading company has been tapped to head up the National Security Bureau (NBÚ), a vital element in Slovakia's security apparatus.

František Blanárik, the former central secretary of the ruling Movement for a Democratic Slovakia (HZDS) party and a board member of the Petina International arms trading company between 2001 and 2002, has been nominated by the HZDS to lead the bureau. He is expected to be confirmed by parliament during its September session, replacing outgoing NBÚ Chairman Aurel Ugor.

Blanárik's appointment aroused misgivings among security analysts, who said that men who used to promote the export of weapons from Slovakia should not now be entrusted with the task of supervising it.

The NBÚ issues security clearances to people or firms who require access to classified information or who want to trade in weapons. The certificates are also a requirement for companies involved in public procurement.

Ivo Samson, senior research analyst with the Slovak Foreign Policy Association, told The Slovak Spectator that Blanárik was not a good choice.

"The nomination and likely election of František Blanárik will earn the government negative feedback from abroad, especially if controversial people or firms gain NBÚ certificates in the future," he said.

Blanárik also headed a commission under the 1994-1998 government of HZDS leader Vladimír Mečiar that was responsible for issuing export licenses to arms trading companies.

"This [Blanárik] is a man who was active in the HZDS as well as in bodies that decided on arms exports from Slovakia. The country was involved in many scandals in the past due to problematic arms exports, which is why putting this person in the top post at the NBÚ, which also issues certificates to companies trading with arms, is suspicious and counterproductive," Samson said.

The NBÚ's first director, Ján Mojžiš, told the TV Joj station on September 5 that "all nominees carry the risk that they will reveal classified information for profit or for other motives."

Blanárik currently serves as Slovakia's military attaché at its embassy in Ukraine.

Outgoing NBÚ Chairman Ugor, a nominee of the ANO party from the former Dzurinda government, announced on September 5 that he would step down from his post within 10 days. His decision came shortly after HZDS boss Mečiar urged him to quit before being recalled by parliament.

Mečiar said he had called on Ugor to resign because he was not confident that the ANO nominee was capable of ensuring the bureau's own security.

In April and July this year, the NBÚ was the target of two hacker attacks that exploited the bureau's defective IT security policy to break into its servers. The attacks cast doubt on the protection of the sensitive personal data the NBÚ collects on applicants for security clearances.

But observers saw the HZDS' quest for the NBÚ post as compensation for its failure last month to have its nominee, Igor Urban, confirmed as head of counter-intelligence at the SIS secret service.

"From its time in government in the past, the HZDS remembers very well the enormous value of having access to sensitive information, and knows from experience that information is the key to wielding power effectively," Samson said.

Urban used to be the chairman of the parliamentary Special Oversight Committee for the SIS during Ivan Lexa's infamous stewardship.

Under Lexa's rule from 1995 to 1998, the SIS was suspected of organizing the kidnapping of the former president's son, Michal Kováč Jr, and the killing of a key figure in the subsequent police investigation.

Mečiar was evidently angered by the refusal of new SIS Director Jozef Magala to name Urban as his deputy, and disowned responsibility for the service.

"The SIS does not have the support of the HZDS, and I have no confidence in the direction in which it is heading," Mečiar said.

Whatever their opinions of Ugor's performance, critics doubted that having a HZDS nominee lead the NBÚ instead would improve the institution's image or ensure the safety of its data.

"Considering the history of HZDS activities in the security area, this is probably not a good idea," said former Interior Minister Vladimír Palko, a member of the opposition Christian Democratic Movement.

But Samson said that the composition of the new Slovak government was bound to result in similar nominations, and that the international community might be relieved that a HZDS member was to lead the NBÚ rather than be given a top SIS post.

"The foreign community has already accepted the fact that the HZDS is a member of the new government, so it will also have to accept its nominees taking key posts in such sensitive government institutions as the NBÚ. It may even be more acceptable to the foreign community to see a HZDS nominee in the NBÚ management rather than in the secret service," Samson said.