TEN-YEAR-OLD Thomas Gresty was hiking in Račková Dolina valley in the West Tatras mountains with a group of other children at the beginning of July when he got separated from the group and found himself lost in the forest. A rescue team discovered him two days later, exhausted and with head injuries. 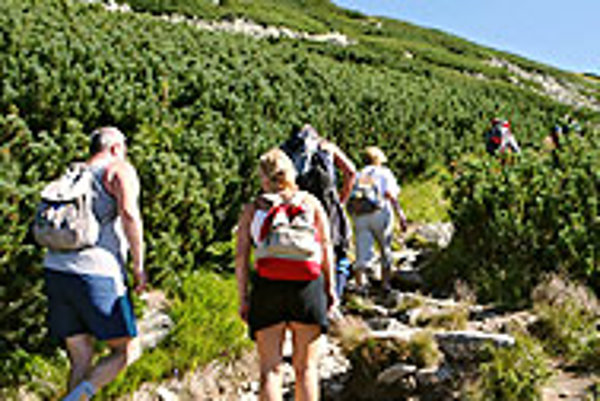 Font size:A-|A+  Comments disabled
TEN-YEAR-OLD Thomas Gresty was hiking in Račková Dolina valley in the West Tatras mountains with a group of other children at the beginning of July when he got separated from the group and found himself lost in the forest. A rescue team discovered him two days later, exhausted and with head injuries. The 40-hour operation, which involved airplanes and over 100 people, cost about Sk622,000. Who was going to pay the bill?

At first it seemed that Thomas' parents would be on the hook for the costs of the rescue operation, as the organisers of the children's camp that Thomas had been attending had not reminded parents that from July 1, rescue services were no longer free, and that people travelling in the mountains should have accident insurance.

Luckily for the Gresty family, the members of the Mountain Rescue Service (HZS) agreed to forego their wages for the time they spent searching for Thomas, and Prime Minister Robert Fico, Parliamentary Speaker Pavol Paška and Interior Minister Robert Kaliňák offered to pay the expenses.

But in future, not every tourist who gets lost or injured in the mountains can expect such generosity. According to a recent amendment to the Mountain Rescue Service Act, as of the beginning of July rescue missions carried out by the HZS in Slovakia are no longer free. This means that tourists who do not carry commercial insurance will have to pay for any rescue services rendered by the HZS.

Tourists who ignore the law and need to be rescued could find themselves paying anywhere from several thousand crowns for easier rescue operations to several hundred thousand for more complicated ones. Although 60 percent of rescues performed cost Sk4,500 or less, and only about 12 percent cost more than Sk100,000, it's not a risk worth taking, according to HZS Director Jozef Janiga.

Janiga said that while only half of those who had to be rescued in July were insured, the situation is gradually improving. He expects it could take another two years before people get used to insuring themselves before hiking in the mountains.

"In July, 46 percent of those rescued were insured. In August the figure was already 68 percent," Janiga told The Slovak Spectator. He ascribed the August increase to the media coverage the issue has received, as well as to the growing number of places where such insurance can be bought.

Katarína Janáková from the insurer Allianz-Slovenská poisťovňa believes that people will get used to buying this type of insurance, just as they now buy insurance before leaving for their holidays. "We see even now that tourists are interested in this kind of insurance and that they realise its importance," she said.

The insurance companies say they are doing all they can to bring this kind of insurance to people's attention.

"We informed the public through our web page, customer centre, and branch offices. We organised a press conference on this topic and printed special leaflets and posters. We also created a help card for this type of insurance with instructions for clients," said Drahomíra Juríková, spokeswoman of Union Poisťovňa.

The insurance can be purchased at insurance company branch offices as well as travel agencies, hotels, pensions, and tourist information centres. Some insurance companies even offer the possibility of purchasing it by phone or on the Internet.

Insurance against accidents in the mountains should cover the costs of search, rescue, and transport, and, in cases of death, transport of the remains.

The cost of the insurance varies according to what you will be doing in the mountains, whether just walking or doing something more dangerous such as skiing, rafting, or canoeing.

Insurance companies recommend that people be honest about the purpose of their trip and that they follow the instructions issued by the HZS during their stay in the mountains, especially concerning closed hiking trails and the dangers of avalanches. They also advise tourists to register their names in a book of walks and climbs before leaving, and to sign out when they return.

Juríková of Union said: "Visitors to the mountains are obliged to follow the instructions of the HZD in order to ensure their safety in the mountains. In assessing insurance claims we take into consideration the type of insurance, such as whether or not the policy allows the client to be in a certain terrain, and the circumstances of the accident. For example, we use the HZS' records of the rescue or medical reports [as sources of information]."

Janáková added: "The insurance company treats cases in which laws, regulations or HZS instructions have been broken on an individual basis [in case of insurance claims]."

HZS rescuers went on 44 missions in July, saving 51 people. The service was called out mostly by Czech, Slovak and Polish tourists, with the majority of rescues taking place in the High Tatras mountains. The HZS registered two fatalities in July.

In the first month after the amendment took effect, rescue costs came to slightly over Sk1 million. Janiga expressed satisfaction with the Sk500,000 in payments he had received for the rescue missions performed so far.