EACH year, millions of Chinese and Japanese tourists travel across the globe. The Slovak Tourist Board now says it wants a piece of the action, and has launched plans to get some of the Asian globetrotters to consider Slovakia as a travel destination, including the first ever charter flight between Tokyo and Bratislava. 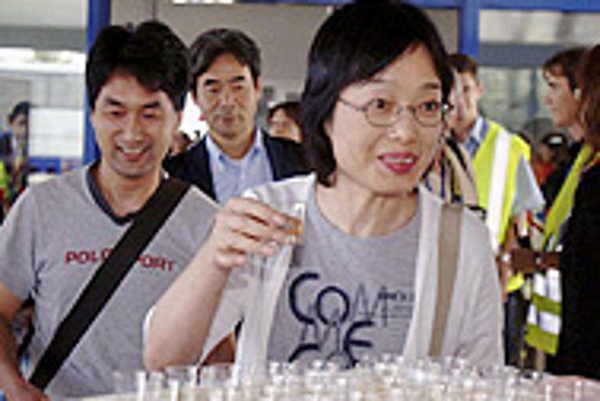 Font size:A-|A+  Comments disabled
EACH year, millions of Chinese and Japanese tourists travel across the globe. The Slovak Tourist Board now says it wants a piece of the action, and has launched plans to get some of the Asian globetrotters to consider Slovakia as a travel destination, including the first ever charter flight between Tokyo and Bratislava.

In 2004, 16.8 million Japanese tourists travelled abroad, while in 2005 over 31 million Chinese visited foreign countries. The latter figure represents a 12.5 percent increase in the number of Chinese tourists from the year before, a rate of growth that is expected to continue annually until at least 2020.

Many of these Eastern tourists are finding their way to Europe: Austria, Germany, and France last year recorded triple-digit increases in the number of visits by Chinese tourists. In light of this explosive growth, the European Tourism Commission is preparing to launch a Chinese version of their popular Internet portal, www.visiteurope.com.

While Slovakia has so far not been overwhelmed by tourists from East Asia, the Slovak Tourist Board (SACR) expects that when the data from the summer of 2006 become available, they will show greater interest from Japan and China.

SACR reported that more than 14,000 tourists from Japan and 1,400 from China visited Slovakia in 2005. These numbers represented a 35 percent year-on-year increase from Japan and an 80 percent increase for China.

"We expect that this year the numbers [of tourists] will increase even more," said Agnesa Klimová, SACR's temporary director.

On August 18 the first Tokyo-Bratislava charter flight landed at M. R. Štefánik airport in the Slovak capital carrying a group of 350 Japan tourists. On the same day, Bratislava airport signed an agreement with Japan Airlines to bring additional charter flights from Japan.

This first direct flight resulted from an initiative by the Japanese ambassador to Slovakia, Makoto Washizu, as well as an overall increase of cooperation between Japan and Central Europe.

The Japanese visitors dispersed throughout the country, with some concentrating on Bratislava and its surroundings, some travelling to eastern Slovakia, and the rest visiting the Czech Republic and Hungary.

Those who remained in Slovakia were treated to the sights of Bratislava, the village of Čičmany with its special Slovak folk architecture, and the Spiš region in eastern Slovakia which is noted for its distinctive gothic wooden churches. The travellers departed from Bratislava on August 25.

The trip was arranged through the Japanese association of travel agencies (JATA) in cooperation with SACR. The programme in Slovakia was prepared by the Satur travel agency.

"It's difficult to say what they liked the most. You don't get much feedback from Japanese tourists. I only heard from their guides that they were satisfied and that they liked the trip. They were mainly interested in the UNESCO monuments, but they always ask that these locations be included in the programme," Soňa Zelenáková of Satur told The Slovak Spectator.

She added that in her experience, Japanese tourists tended to be fairly demanding.

"You have to exceed their expectations, such as not giving them sparkling mineral water, providing detached beds in hotel rooms, and other special wishes, and then they are satisfied," Zelenáková said.

According to SACR's Klimová, the pilot project should result in growing numbers of Japanese tourists discovering Slovakia as a travel destination. The board plans to participate with Jata in other tourism trade fairs in Japan.

On August 28, Slovak Prime Minister Robert Fico and Japanese Minister for Agriculture, Territorial Planning, and Transport Kazuo Kitagawa, met in Bratislava to discuss increasing tourism and investment in Slovakia. Kitagawa was the first representative of the Japanese government to travel on official business to Slovakia.

According to Kitagawa, the Japanese government regards Slovakia as an excellent location for the development and expansion of tourism. Fico also invited the Japanese royal family and Japanese Prime Minister Koizumi to pay an official visit.

During the first half of 2006, SACR participated in two tourism promotion trade fairs in Shanghai and Peking. The board also organised informational trips for Chinese journalists, as well as Slovak tourism presentations.

According to SACR, Chinese tourists are mainly interested in visiting the cultural and historical monuments of Slovakia as well as the Slovak capital. Slovak folk culture, traditions and natural beauty also hold a special interest.

In terms purchases, Chinese tourists most often return home with Slovak crystal, antiques and souvenirs such as ceramics, tinker crafts and folk art created from wire and corn husk.

Among outdoor activities, rafting on the Dunajec River in the Pieniny national park is the main source of enjoyment for the Chinese, the board said.