THE INDEBTEDNESS of Slovaks is only about a quarter of that of the inhabitants of Western Europe, and according to banks, Slovak debtors are disciplined about paying their loans. 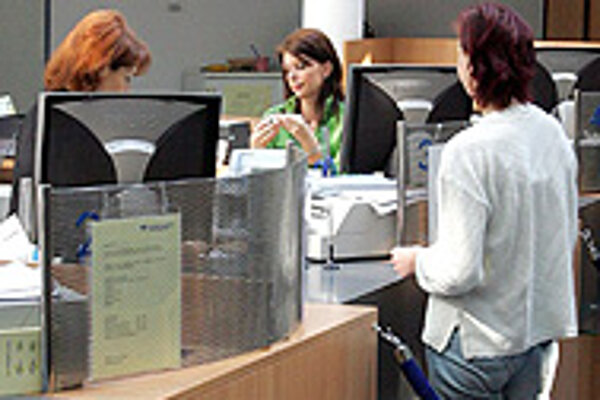 Font size:A-|A+  Comments disabled
THE INDEBTEDNESS of Slovaks is only about a quarter of that of the inhabitants of Western Europe, and according to banks, Slovak debtors are disciplined about paying their loans.

However, with the volume of loans on the Slovak banking market growing fast, the average debt load and client payment behaviour could change quickly, which is why banks are preparing for the day that their Slovak customers have problems repaying their loans.

According to the National Bank of Slovakia (NBS), Slovak households at the moment are better credit risks than businesses. In 2005, households failed to repay only Sk2.3 of each Sk100 borrowed from banks, while businesses defaulted on Sk6.4 out of Sk100.

Part of this stern payment discipline is due to the fact that households tend to take long-term loans, which are the least risky of all credit products. Over seven in ten (71.3 percent) loans to households in 2005 were long-term, most of them mortgages. Households failed to repay only Sk1.5 per Sk100 in mortgages. Discipline in repaying short-term loans was worse, but only eight percent of the overall volume of household loans fit this category, according to the NBS.

The central bank reported that Slovak households used only four percent of their gross disposable income for repaying loans in 2005. Although this figure is increasing, it is still among the lowest in the European Union. For example, in 2002 the Dutch used about 11 percent of their incomes to repay loans, while the Germans and English used 7 percent each.

According to VÚB bank spokesman Michal Kopecký, consumer loans with no collateral are traditionally the riskiest form of credit for banks. "However, even here only a small percentage of such loans in Slovakia are classified," he said.

Payment discipline increases with the value of the collateral that secures the loan. "Mortgages and other loans with real estate as collateral are the least problematic," said Kopecký.

"Overall, Slovaks are relatively disciplined in paying their loans."

Tatra banka spokesman Roman Začka agreed that despite the growing volume of loans, the ratio of defaulters is relatively low in Slovakia. "This is due both to responsibility on the part of clients, who usually think twice before taking on greater financial commitments, as well as to the bank's careful lending policy," he told The Slovak Spectator.

"We have not experienced major problems in payment discipline on loans. We take an individual approach to cases when a client is not able to pay their loan," said ČSOB spokeswoman Marta Krejcarová.

But the country's light load/strict discipline credit equation could change quickly. Last year, Slovak households borrowed Sk166 billion, an increase of 42 percent from the year before. The ratio of household loans to GDP stood at 11.6 percent in 2005, while in 2004 it was 8.8 percent.

Furthermore, based on NBS data, 82 percent of household loans have floating interest rates or fixed rates of up to one year. The central bank warns that if rates grow quickly, some households might have problems repaying their loans.

Since the beginning of this year the central bank has increased key interest rates three times by 50 basis points each to 4.5 percent. According to analysts, the rate will rise to 5 percent by the end of the year.

With these facts in mind, banks have begun informing their clients more regularly and in greater depth of what to do if they discover they are unable to make their instalments. The key, bank representatives say, is not to keep the information to themselves, but to announce it to the bank as soon as possible.

By prolonging the loan maturity, the size of the monthly instalments can be reduced. Another common way of helping clients overcome temporary difficulties is to postpone principal repayments.

Miriam Fuňová, the spokeswoman of Slovenská Sporiteľňa (SLSP), said it is important that the bank sees the client is trying to solve the problem.

"If the client actively cooperates with the bank, we try to find the most suitable solution for him. We take an individual approach to each client who stops paying their loan, and exercise our right to the collateral only in extreme situations," Fuňová said.

If a client is unable to keep the original instalment calendar, Kopecký of VÚB said, the bank can rework the calendar.

"It's important that the client informs the bank of any problems in paying the loan as soon as possible.

"This gives us the greatest chance to find a solution acceptable for both parties. If a client then continues to pay the loan according to the amended instalment calendar, he faces no sanctions."

Krejcarová of ČSOB advised clients to inform the bank of anything that could reduce their ability to pay the loan during the whole loan relationship period.

"This mainly includes changes in a client's financial or material situation, his intention to take on more financial commitments, to sell of transfer his property to someone else or to use it as collateral, or to provide a guarantee on someone else's loan."