AS BULGARIA and Romania celebrated the promise of their admission to the European Union as of next year, Slovakia's top politicians declared that their country should open its labour market to the EU's newest members. 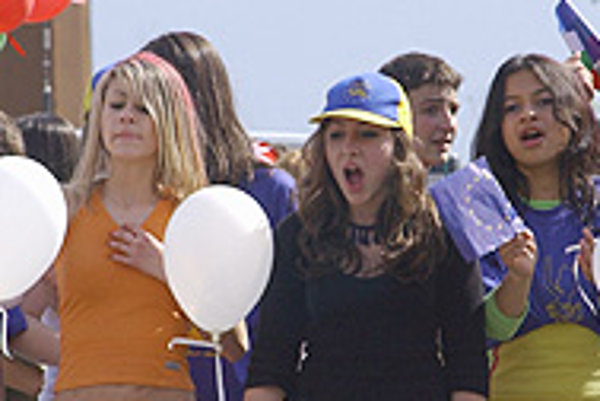 Font size:A-|A+0
AS BULGARIA and Romania celebrated the promise of their admission to the European Union as of next year, Slovakia's top politicians declared that their country should open its labour market to the EU's newest members.

Foreign Minister Ján Kubiš and Labour Minister Viera Tomanová agreed during talks on September 28 that allowing Bulgarians and Rumanians to work in Slovakia without visas would not have a huge impact on the Slovak economy.

"I will personally push for our labour market to be opened to Bulgaria and Romania," said Kubiš. The final decision lies with the cabinet.

Given the disgruntlement of Slovaks with the decision of most of the original 15 EU members to leave labour market barriers in place following the last enlargement round in 2004, the political mood in Bratislava following the news that Bulgaria and Romania would join the EU on January 1, 2007 was one of ostentatious brotherhood with the newcomers.

"Given that we are members of the same union, this [keeping labour markets closed to Bulgaria and Romania] would seem to be more about political discrimination than economic or social inequality, and this is not acceptable," said Slovak President Ivan Gašparovič.

"It would be unfair and politically unjust to close Slovakia's labour market," agreed Slovak MEP Miroslav Mikolášik. "Given the catastrophic demographic situation in Slovakia, maybe we'd be even glad if some workers come in."

Mikolášik's words underline one of the ironies of the current EU labour marker - while Slovakia is not expected to be as attractive to the newest Europeans because of its relatively low wages, it is among the EU countries that most desperately needs an infusion of young and educated migrant workers.

New figures produced by the Slovak Academy of Sciences (SAV) show that Slovakia is losing its university graduates to richer states at a faster rate than most of its neighbours.

While no precise data exist to show how heavy the brain drain has become after two years as an EU member, the SAV's regular labour force surveys show that about 10,000 university graduates leave Slovakia for work abroad every year - about a third of the annual crop.

And according to a recent survey of 2,521 university students by the SAV's Institute of Sociology, 47 percent of respondents said they wanted to emigrate for work and never return, while a further 46 percent would like to emigrate at least for some years.

"For Slovakia this will be a loss unless these people return within five years and use the skills they have gained at home," said Vladimír Baláž of the SAV's Forecasting Institute.

With some major Slovak firms, including auto supplier Matador, complaining of a lack of skilled labourers in this country, economists see opening Slovakia's labour market to the new EU members as a smart move.

"Opening our labour market could help the economy, because Romania in particular represents a source of cheap and educated labour," said Ján Tóth, chief analyst at ING Bank in Bratislava.

So will the Bulgarians and Romanians be stepping up to fill the gap? Not likely, say observers.

"Bulgarians are mostly interested in seasonal work in Greece, Spain and Italy. Slovakia will not be flooded by Bulgarians," said Bulgaria's ambassador to Slovakia, Ognian Garkov.

The average monthly wage in Bulgaria is about 170 euros, compared to 255 in Romania and 480 in Slovakia. Compared to Western European wages, however, Slovakia is less attractive, as even the minimum wage in countries like Belgium, the Netherlands and France, is over 1,200 euros.

"Most migrant workers [from Bulgaria and Romania] will head to Western European countries where they can earn higher wages," said Ivana Rajecová of the Employment Institute think-tank.

This is bad news for Slovakia's labour market, which continues to lose valuable talent.

Statistics show that five times more Slovaks than Czechs - 170,000 - have left to work abroad, 85,000 of them in the Czech Republic alone. "If wages in Slovakia were even comparable to those of our neighbour, the rate of departure of our young educated citizens would slow dramatically," said the SAV's Baláž.

An average of about 20 Bulgarians move to Slovakia every year, while Romania accounted for 325 immigrants to Slovakia in 2004 and 155 last year.

Slovakia is also losing its university-educated citizens far more quickly than such people are immigrating to replace them. An OECD study comparing 10 member states - Slovakia, Poland, Hungary, the Czech Republic, Ireland, Finland, France, Switzerland, Canada and Luxembourg - put Slovakia at the bottom of the heap, with 16.4 percent of emigrants having university degrees in 2004, and only 4.15 percent of immigrants, a differential of -12.25.

"Further [university-educated] immigrants are being put off by Slovakia's low wages and its overall international image," Baláž said.

Despite Slovakia's reputation as a country of stay-at-home citizens with low labour mobility, analysts say that global population trends and economic realities have turned Slovaks into migrants.

"This wave is part of a larger global movement towards the West. But behind it is the long-term dissatisfaction Slovaks feel due to the fact that every country we compare ourselves to is better off economically," said sociologist Miroslav Bahna from the SAV.

"Young people are often supported in departing by their families, and it's often the parents who send their children abroad. Kids who stay home are regarded as not having enough drive or of being lazy. Not spending at least some time abroad is seen almost as a personal failure."

Another risk for the country is the number of Slovak university students at foreign schools - 15,179 in 2004, compared to 8,052 Hungarians and 7,076 Czechs. When the size of each country's populations is taken into account, Slovaks are three times as likely to study abroad as young people in neighbouring countries.

On the other hand, only 1,640 foreign students were registered at Slovak universities.

"If the country is sending a significant proportion of its young generation abroad, it should attract a similar number of young people here from abroad," said Bahna. "So far it seems as if no one is seeing the larger picture. We have to motivate our universities to open programs in English to attract foreign students."