A wonderland of charity and friendship

"I'M LATE," I muttered as I looked at my watch and hopped off a trolleybus at Pražská Street, "I'm late for a very important date!"
I was on my way to cover an event at the Japanese ambassador's residence, near Horský Park, and I wanted to make a good impression. 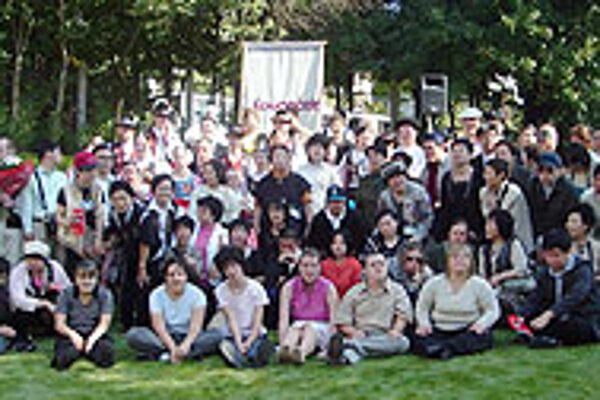 Font size:A-|A+  Comments disabled
"I'M LATE," I muttered as I looked at my watch and hopped off a trolleybus at Pražská Street, "I'm late for a very important date!"

I was on my way to cover an event at the Japanese ambassador's residence, near Horský Park, and I wanted to make a good impression.

I spotted an underpass across the street. It looked dark and deserted, but, having lived in Bratislava some time now, I've learned to put my New York paranoia aside, and sprang for it.

It was a typical Bratislava underpass - graffitied walls and discarded beer cans on the ground - yet something about its dipping trail and pitch-black mustiness reminded me of a rabbit hole. Slightly lost when I emerged, I consulted my map and got back on track.

The ambassador's residence was down a few winding streets, surrounded by security. I rang the bell and was soon greeted by The Counsellor.

The Counsellor was a serious fellow, who immediately asked to exchange business cards. As someone who has taught international business cultures to corporate English students, I kicked myself for not remembering to have one ready.

The Counsellor led me to the back of the residence, where a sizable group had already gathered. There, I caught sight of the Television Journalist performing interviews with smiling Japanese officials, and members of Javorček, a Slovak folk ensemble for young people with Down Syndrome.

Suddenly, a snowy-haired woman appeared in front of me. No sooner had she introduced herself as Mrs. Cipárová from the International Women's Club than she spun around to point out the people I might want to interview: Ján Škot, the director of social services for children and adults; Dušan Mikulec, the dapper director of Lepší svet, a support organization for the mentally handicapped; and Mirjam Tureničová, the director of Prima, which assists the handicapped. A kind smile and offer of assistance later and Mrs. Cipárová had disappeared.

I stepped aside for a moment to take in the scene. People of many diverse ages, nationalities and mental capacities were laughing, conversing and sharing in the spirit of charity. This was not a meeting about some foreign investment scheme, with phony smiles and overnight billionaires. This enthusiasm was genuine and infectious.

But beneath the animated conversations and heartfelt giggles I sensed the light rumble of tapping feet and expectant glances toward the residence's main gate, which stood atop a large lawn. I stood up and looked, but saw nothing yet.

Our attention turned back to the residence as the Ambassador's Wife emerged and lightly touched down. She wore a caramel-colored blouse with silver trim that sparkled as she answered questions for the Television Journalist, then glided most elegantly among the visitors, hugging and laughing with a delicate voice that matched her fine features.

I knew the moment I had come to see had finally arrived when a security guard outside the residence began waving through a fleet of buses.

Everyone around me turned to look at the residence gates, then erupted in applause as about eighty mentally and physically handicapped Japanese people from the Tokyo Association for Supporting the Independence of the Mentally Handicapped emerged.

The association had brought its members to Slovakia to meet the mentally handicapped from other cultures. They had already stopped off in Switzerland and Austria, and were planning to stay in Slovakia for a week.

At first, the crowd surged forward in a wave, greeting each other and smiling, but the Interpreter called us all onto the lawn to listen to speeches.

I chuckled with delight as each and every Slovak who started their speech with "Dobrý deň", which the Interpreter translated as "Konichiwa", was met with a roar of konichiwas from the audience. Soon enough, I was roaring along with them!

During one speech, I was a bit startled to see a Japanese woman suddenly jump up from her conversation and run over to one of her charges to gently pull clumps of grass from her mouth!

Then the groups sought to exchange gifts. Unfortunately, this part of the festivities had not been particularly well-rehearsed. The Slovak participants had learned to bow in the Japanese style, while the Japanese had been taught to solemnly offer a handshake, so the two kept doing the opposite of each other.

Then, one of the mentally handicapped Slovaks realized she had forgotten to line up with her gift, so she rectified the situation by flying at top speed to the front of the line and throwing herself into position, thus terrifying one of her Japanese counterparts, who emitted a muffled scream. Despite the well-deserved Japanese reputation for organization, it looked like a cheerful train wreck.

Afterwards, we were treated to a traditional Japanese meal with sushi, sake and green tea. One Slovak man tried repeatedly to stab a piece of sushi with his fork and transfer it to his plate, but kept missing. A Japanese woman then snatched it with her chopsticks and placed it on his plate. Then, kindly, she added a second piece to his plate. Only after seeing him later in that day, staring intently at one of the gifts the Japanese had given, did I see the hearing aid in his ear, and realize he was one of the mentally handicapped Slovaks.

Then came the dancing from the Javorček ensemble. It was wonderful to see dancers with Down Syndrome keeping pace with the others, and injecting their own style of coordination and devotion into the intricate patterns and dance steps.

This truly showed the Japanese visitors the equal, active and unique role handicapped Slovaks play in celebrating and preserving their national heritage.

My favorite part was at the beginning of one dance, when a Javorček ensemble member gently swayed his hand above his head, then gave out a mighty, almost kamikaze-like scream. It showed such unbridled enthusiasm.

With applause still ringing throughout the lawn, the folk ensemble wrapped up its presentation and began making its way toward the residence to mingle and enjoy some of the delicious food.

Along the way, someone asked them to pose for a picture with a severely physically handicapped Japanese man in a wheelchair, which, of course, they did with pleasure.

And as smiles lit up their faces, I could see one stretch across his as well.