Cabinet gets report cards as it passes 100-day mark

ONE HUNDRED days since taking office after the June 17 general elections, Robert Fico's government remains popular with Slovak voters, according to the polls, while the new PM is by far the country's most trusted politician. 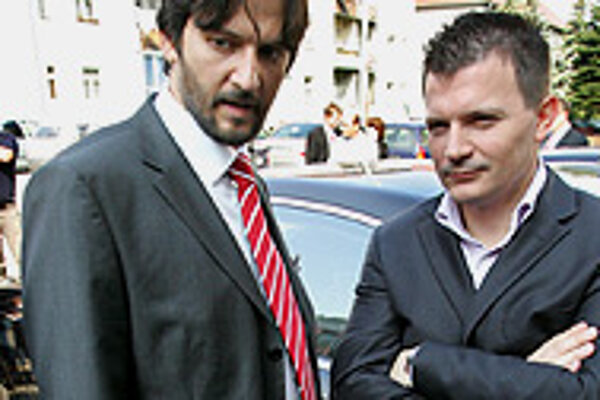 Font size:A-|A+  Comments disabled
ONE HUNDRED days since taking office after the June 17 general elections, Robert Fico's government remains popular with Slovak voters, according to the polls, while the new PM is by far the country's most trusted politician.

While the business sector and the majority of political analysts remain cautious about the government's plans, its first steps in office suggest that Fico's socialist Smer party does not intend to scrap the previous government's reforms in as wholesale a manner as it suggested ahead of the elections.

Smer has also demonstrated its dominance within the coalition, which also includes the Slovak National Party (SNS) and the Movement for a Democratic Slovakia (HZDS). With few exceptions, it controls the most important posts at state institutions and state-owned companies, all of which continue to be filled by virtue of political affiliation rather than professional qualifications.

However, Smer's choice of coalition partners has caused it many problems on the international stage, especially in the European Parliament, where its cooperation with the far-right SNS caused it to be suspended on October 12 by the Party of European Socialists (see related story, page 1).

When Fico initially announced the names of his coalition partners, observers in Slovakia were surprised as well, as such a coalition had been widely labeled as a "worst-case scenario" that would threaten the country's booming economy as well as its young democracy.

Many wondered why Fico would risk his political future by working with the SNS and HZDS, whose authoritarian government from 1994 to 1998 resulted in Slovakia's virtual international isolation.

Monika Beňová, the former Smer deputy chairwoman who recently lost her post because of her opposition to the composition of the current government, said that "the main reason [Fico chose the SNS and HZDS as coalition partners] was that Smer did not sense any resistance [to its program] in these parties".

Many observers said that the coalition's first steps in power confirmed that Smer had not been prepared for the task of running the country. In some of its ministries, Smer has even kept people on staff who served the former right-wing government. At the Finance Ministry, for example, the co-author of the right-wing government's tax reform, Richard Sulík, has kept his job and now advises the new left-wing minister, Ján Počiatek.

Despite its occasionally chaotic behaviour, however, the new government has received high marks from economic analysts for its decision to stick to the original plan of adopting the euro in Slovakia in January 2009, and its consequent commitment to keep the public finance deficit at no more than three percent of GDP.

Prior to the approval of the state budget, it was unclear how the Fico government intended to accommodate its pre-election promises to voters within the strict budget deficit limits it must observe in order to adopt the euro.

The answer was provided by the draft budget for 2007 approved by the cabinet on October 11. Despite raising benefits for the parents of newborns or giving pensioners Christmas bonuses, Smer has backed away from some of the bolder plans it had announced ahead of the elections, including scrapping the flat tax and introducing higher taxes for rich people. Likewise, instead of the promised lower VAT rate on food and energy, the government has reduced VAT only for medicine.

Smer has also turned its back on plans to impose a special tax on banks or natural monopolies, or to tinker with the pension reform.

According to political analyst Miroslav Kusý, the first 100 days of the new government left a mixed impression.

"They presented a vision, but the reality is different," he said, adding that he had doubts as to whether some of the 'social measures' taken by the current government would actually help the people they were designed for.

The rise in the minimum wage, for example, could actually increase barriers to employment for the least qualified people, because it increases the minimum payroll taxes paid by employers, and thus makes labour more expensive.

Observers also labelled measures such as the special Christmas bonus for pensioners, which the government promised to pay this December, as haphazard and even unjust.

Politically, the new coalition now seems less stable than it appeared at the beginning. Mečiar's HZDS is increasingly unhappy with its status in the coalition, and its regional structures have complained that the benefits of the party's participation in the ruling coalition are taking a long time to trickle down.

"Many of our people had to leave [their posts] fast in 1998 [at the end of the third Mečiar government]. Now they want to return," said HZDS MP Milan Rehák for the Hospodárske noviny daily.

Indeed, personnel nominations to individual ministries and later to specialized government institutions, state owned companies, and even the Constitutional Court, show that the parties of the government are using these posts to reward supporters rather than hire professionals.

Political analyst Soňa Szomolányi said that based on its governance so far, Smer could not truly call itself a leftist party.

"Even though it has the label 'social democracy' in its name, Smer's actions so far do not show much evidence of social democracy. Instead, its activities to strengthen the social aspect of the state are more evidence of its incompetence and irresponsibility than proof that it knows how to govern in a systematic way. Even 100 days after the elections, Fico's rhetoric is more that of an opposition leader than of a prime minister," Szomolányi told The Slovak Spectator.

Szomolányi said that the "social aspect" of Fico's government was still more symbolic than real, and cited the cancellation of the Sk20 and Sk50 health care fees, or the introduction of new mortgage subsidies for lower income groups. The analyst was particularly critical of "the PM's rhetoric, which smells of class hatred towards more fortunate people".

In her opinion, "the populist and incompetent way in which the government wants to cut energy prices [by putting the independent market regulator under greater political control] is also a political hit with the government's voters. That's why the government remains highly popular. But this manner of governance is non-systematic and counterproductive in the long run, even for those people whom it allegedly helps."

"The good news for the economy is that under pressure of the country's membership in the EU, Smer is not fulfilling all of its irresponsible election promises which helped it gain voters."

MVK analyst Pavel Haulík, however, said that many people had wanted a change in government to revise some of the toughest right-wing reforms launched by the previous government, which many people perceived as too harsh and unjust.

Despite signs of discontent within the new coalition, Szomolányi said she thought the government would last.

"In spite of the personal rivalries and the differing political programs, the coalition partners will stick together thanks to their strong interest in holding and wielding power," she said.

Béla Bugár of the Hungarian Coalition Party said the first days of the Fico government had proven how easy it was to make big promises ahead of elections, and how hard it was to make good on them once in power.

"The first 100 days also showed that the government has lost sight of the citizens of this country and their interests, and is paying attention only to one group - people who voted for Smer," Bugár said.

Source: MVK agency, published October 12.
Results from a survey conducted between
October 2 and 9 of 1,119 respondents,
asking the question: If elections were held
today, who would you vote for?