Dial 0949 for the competition

SLOVAKS will soon get a chance to try out the services of a third mobile operator, Telefónica O2 Slovakia, which recently won a tender for a licence to provide mobile telecom services in Slovakia. 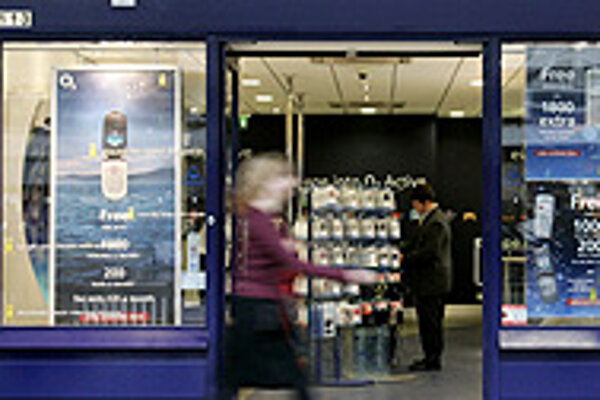 Font size:A-|A+0
SLOVAKS will soon get a chance to try out the services of a third mobile operator, Telefónica O2 Slovakia, which recently won a tender for a licence to provide mobile telecom services in Slovakia.

Telefónica plans to offer services to the public starting in the first quarter of 2007. The firm's customers will be distinguished by their 0949 prefix.

Despite the fact that mobile phone penetration in Slovakia already exceeds 85 percent and the voice market is considered almost saturated, Telefónica is prepared to fight for a place on the market.

"We believe in this market and that's why we're here. We believe that the market will respond to our offer," said Juraj Šedivý, general manager of Telefónica O2, at the firm's first press conference.

Although Šedivý would not give any details of Telefónica's competitive strategy or the tools it will use on the Slovak market, he indicated he would go after competitors T-Mobile Slovensko and Orange Slovensko on prices.

"The market definitely needs a price correction," he said.

The license allowing Telefónica O2 Slovakia to operate a mobile network in Slovakia came into effect on September 7, a day after the mobile services company paid Sk150 million for the permit.

TÚ spokesman Roman Vavro said that by the dates set, Telefónica O2 Slovakia must have its own network that enables it to provide services to at least some part of Slovakia. "It doesn't have to build its own network for the whole territory of Slovakia, as it can ensure coverage for places where it does not have its own network coverage by offering a national roaming service provided through agreements with T-Mobile and Orange," Vavro told The Slovak Spectator.

Šedivý said that Telefónica O2 Slovakia is now in talks with both existing mobile operators regarding national roaming. "We expect that we will launch our network and enter a testing phase by the end of this year."

Although analysts had earlier predicted that Telefónica would try to take advantage of this year's Christmas buying season, the network's preparation timetable suggests this will not happen. Šedivý confirmed that the firm would not start offering services until next year, and added that in the long term, one missed Christmas is not that important.

"The mobile market cannot be won in one month, and in certainly not in one Christmas season. We are confident that when we launch our operation, we will have what we need to engage the market."

Šedivý said the company wanted to take advantage of the fact that Slovak customers appreciate the latest technology and tend to use more sophisticated services.

He also predicted that the penetration rate in Slovakia could reach 115 percent in the next two to three years, a rate similar to that in the Czech Republic.

In its first year, Telefónica wants to focus exclusively on the mobile network market; however, Šedivý said he did not rule out the possibility that Telefónica would be interested in offering fixed-line services later.

Telefónica intends to hire 150 to 200 people in its first year. Šedivý would not provide details of investments or the services that the company is planning to offer, but said the firm wants to reach all segments of the market starting with pre-paid cards.

Telefónica O2 Slovakia was set up in November 2002 under the name Czech Telecom Slovakia. It has been using its current name since June 27 this year. Its sole partner is the Czech company Telefónica O2 Czech Republic.

What the competition says

The two mobile incumbents, T-Mobile and Orange, say they are not intimidated by Telefónica's arrival, and will continue fighting for every customer.

Peter Tóth, spokesman for Orange Slovensko, the largest mobile operator in Slovakia, said: "Orange has been counting on the entrance of a third mobile operator on the market. We have already included it in our strategic plans."

Juraj Droba, director of corporate affairs for T-Mobile Slovensko, pointed out that the telecom market is already one of the most competitive in Slovakia, and the entry of a third mobile operator is only likely to increase the competition.

"[Telefónica] O2 is the one that has to come up with a strategy that will ensure their position in a saturated market is sustainable," Droba said. "We have already incorporated the entry of a third player into our strategic scenarios. Nevertheless, our long-term strategy remains unchanged. T-Mobile wants to be the most highly regarded service company in the country. We are prepared and we will compete by offering our customers superior services and value for money."

According to T-Mobile, the Slovak mobile market is characterized by relatively high saturation and low average revenue per user (ARPU), and provides growth opportunities mainly in mobile data and value added services (VAS).

Compared to other countries, including those in Western Europe, Slovakia has a very high invoiced to pre-paid services ratio, while pre-paid dominates elsewhere. This means that Slovak operators have been successful in their efforts to encourage migration from pre-paid cards to contracts.

Slovak customers also have a broad portfolio of content services to choose from, which were originally only an add-on to the core business - mobile voice and text messaging.

T-Mobile predicts that the most intense competition will be in the field of mobile Internet access. "We can almost certainly assume that interest in mobile Internet access will grow because it brings freedom and the 'no-limits' feeling that we have already grown accustomed to with mobile phones," Droba said.