THE PARLIAMENTARY vote on October 19 to elect replacements for nine Constitutional Court judges was arguably one of the most important elections the country will hold for the next four years, and in the weeks building up to the event, legal experts had feared it would be hijacked by the government. 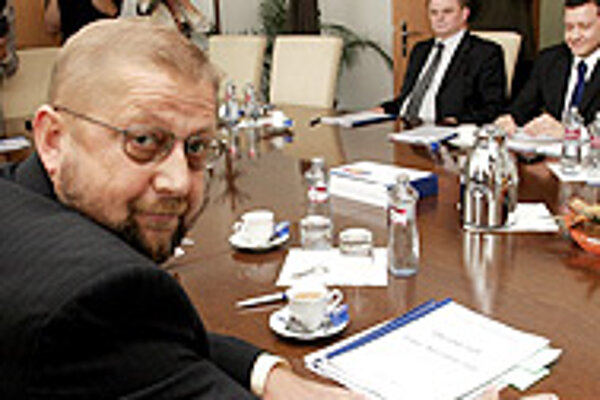 Font size:A-|A+  Comments disabled
THE PARLIAMENTARY vote on October 19 to elect replacements for nine Constitutional Court judges was arguably one of the most important elections the country will hold for the next four years, and in the weeks building up to the event, legal experts had feared it would be hijacked by the government.

The 31 lawyers and judges in the running for the important posts included some surprising nominations that observers said would leave the court - Slovakia's highest legal authority - in the hands of political nominees rather than constitutional experts.

But in the first round of voting, only eight candidates secured the necessary support, none of them obvious political nominees. The unsuccessful 23 applicants moved on to a second round of voting on October 20 to pick the remaining names.

The Constitutional Court rules on cases involving constitutional law and fundamental rights and freedoms, and its verdicts set legal precedents for similar cases in future.

In total the Constitutional Court will need 9 new justices to complete its 13-member bench next year. Six of the current justices will finish their terms in January 2007, while two seats have been vacant since 2004, and the court's chief justice, Ján Mazák, left his post for another job on September 30.

According to the election rules, the parliament elects twice the number of judges required for the vacant spots (18), and then the president selects enough to fill the empty positions (9). Three candidates were already elected by the previous parliament, so the current legislature only had to elect 15 candidates during its current October session.

Once President Ivan Gašparovič has selected nine candidates to fill the vacant posts, the justices will start 12-year terms on the bench. The president will also choose the new chief justice.

Presidential spokesman Marek Trubáč told The Slovak Spectator that Gašparovič "will start dealing with the individual names once they are delivered".

Observers warned, however, that the apparent preference for candidates with political ties to the current ruling coalition meant that the country's future judicial elite might not be inclined to protect democracy in Slovakia as vigorously as it ought.

"I'm worried that the court will cease to be balanced, and that its personnel composition will be the mirror image of the current ruling coalition," said former Constitutional Court Chief Justice Ernest Valko for the SPEX magazine.

"That's very important, because in addition to protecting constitutionality, the court also sets the direction of Slovak society. It makes a huge difference what approach these judges take, whether they are socialist, liberal or conservative, just as it does in the US, for example.

"The president will play a decisive role here, because he decides who gets in and who doesn't. Everything depends on how sensitively he makes these selections."

Among the objections to the selection process for the nominees was the fact that the parliamentary Constitutional and Legal Committee set aside only a single day to hear the presentations of all of 31 candidates.

Šarlota Pufflerová of the Citizen and Democracy Foundation NGO said she doubted that one day was enough for the committee to ascertain whether each individual candidates was worthy of being put before parliament.

"What criteria will our MPs use to select 18 candidates? And what will guide the president in making his decision, given that he did not watch the presentation of a single one of [the candidates]," Pufflerová asked.

One of the more surprising candidates for a Constitutional Court post and even possibly for the chief justice post is Justice Minister Harabin, whose term as minister began only three months ago. His nomination was submitted personally by HZDS Chairman Vladimír Mečiar.

Harabin, probably Slovakia's most controversial judge, served as chief justice of the Supreme Court between 1998 and 2003, during which time he had serious conflicts with then-Justice Minister Daniel Lipšic and his predecessor Ján Čarnogurský. Harabin fiercely defended his court from ministerial interference and resisted the introduction of an electronic case distribution system that was designed to reduce court corruption.

His nomination to the Constitutional Court by Mečiar leads to conflicting speculations - either HZDS is looking for an elegant way get rid of Harabin, who has proven controversial as a minister in his unrelenting efforts to shut down the Special Court, or this is a way of rewarding Harabin for his services so far, and of making way for a new minister nominated by the HZDS.

But Harabin says he does not cause conflicts, and would not describe himself as controversial.

"I am controversial only for some right-wing journalists who support Daniel Lipšic. Of course, judges also have their opinions about me and some even have objections towards me just as I do towards their work and backroom practices. But the foreign community does not see me like that. Compared to the past, I myself try to avoid conflicts," Harabin told The Slovak Spectator.

Harabin also responded to criticism from Lipšic, who said that during the committee hearing Harabin had refused to answer any of the professional questions the former minister asked.

"You know, I don't want to needlessly traumatize the public with verbal attacks between me and MP Lipšic. Everyone understands that we don't really speak the same language on professional issues. I really couldn't have responded to his questions about ongoing Constitutional Court cases. That's stated in the Act on Judges," Harabin said.

However, he also avoided answering a question as to whether he aspired to the top Constitutional Court post.

"My only ambition is to judge according to the law, justly and on the basis of evidence, the same as I have up to now," he said.

Apart from Harabin, other candidates who are perhaps less known for their constitutional expertise than their politics and extra-curricular activities include former HZDS MP Ján Cuper, who now teaches in Bratislava at Comenius University Law School.

Earlier this year, Cuper crashed his car while driving drunk. Although TV crews recorded interviews with the clearly inebriated Cuper shortly after the accident, he later denied having been drunk. It is widely believed that because of this incident, Mečiar did not nominate Cuper as a party candidate for the June 2006 general elections. His nomination to the Constitutional Court was submitted by the Comenius Law School.

Former Constitutional Court judge Tibor Šafárik, who served from the mid 1990s and now works as a lawyer, is another well-known figure. In the past he was also shadow justice minister for the SNS.

Šafárik is chiefly remembered for his decision as Constitutional Court justice in 2000 that the constitutional rights of Jaroslav Svěchota, a former Slovak secret service officer, had been violated by the Interior Ministry during his prosecution for involvement in the 1995 kidnapping of the former president's son, Michal Kováč Jr.

He has also defended ex-Interior Minister Gustáv Krajči (HZDS), who was accused of thwarting a 1997 referendum on NATO membership.

Note: Names in bold were elected by parliament on October 19.