Fico's break with the European socialists: What the suspension means for Slovak politics

DESPITE Ján Slota's record of extremist remarks and behaviour, members of the Slovak ruling coalition of which he is a part were clearly having difficulty last week in understanding why the Party of European Socialists (PES) had suspended the ruling Smer on October 12 for working with Slota's far-right Slovak National Party. 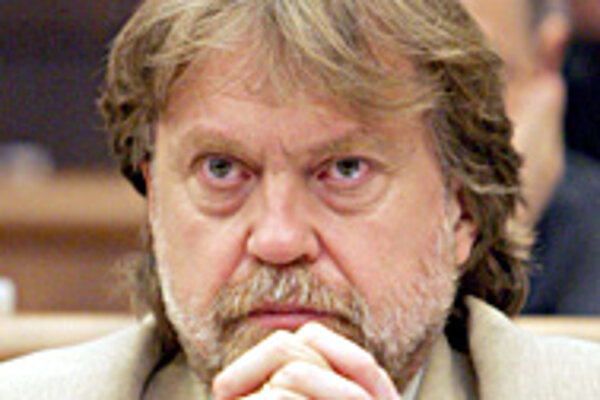 Font size:A-|A+  Comments disabled
DESPITE Ján Slota's record of extremist remarks and behaviour, members of the Slovak ruling coalition of which he is a part were clearly having difficulty last week in understanding why the Party of European Socialists (PES) had suspended the ruling Smer on October 12 for working with Slota's far-right Slovak National Party.

Government spokesperson Silvia Glendová said after the PES decision was handed down that "according to [Prime Minister] Robert Fico, Smer was punished for doing politics for the people, for the fact that he fights with monopolies, and for the fact that he didn't take the SMK [opposition ethnic Hungarian party] into the government".

Glendová sent this standpoint to various media despite the fact that PES Chairman Poul Nyrup Rasmussen had said clearly that the socialists based their decision on one of their founding principles, which forbids cooperation with nationalist and xenophobic parties - which they believed the Slovak National Party (SNS) to be.

Rasmussen told Slovak Radio that "everyone understands that the SNS is not acceptable in its current form, and with its current statutes and character".

The following day, however, Smer's vice-chairman and the speaker of the Slovak parliament, Pavol Paška, termed the decision of the PES hasty, because in his opinion the SNS was not an extremist party in the sense of the Berlin protocol, on the basis of which the PES had suspended Smer.

"It's a paradox," he said at a press conference, "[that the suspension comes] when our party for the first time starts carrying out social-democratic policies, a significant part of which is economic treatment of monopolies and certain businesses on the market in the name of the majority of citizens. We are simply surprised by certain standpoints and steps, nothing more, nothing less."

Paška also said that the PES could have been influenced by the negative view of Smer held by the Hungarian socialist party: "Two members of the PES in the Hungarian press today demanded that we reshuffle the government without the SNS. I don't know where they get the right to dictate, to a sovereign state with a government emerging from democratic elections, who should govern in Slovakia."

Grigorij Mesežnikov, president of the Institute for Public Affairs (IVO) think-tank, told The Slovak Spectator that the PES had had different motives for suspending Smer: "The participation of the SNS in the government, apart from the fact that it could create problems for Slovakia, is unacceptable from the point of view of the PES' principles. They regard this cooperation as a certain form of infection, and believe that if a Slovak party in Central Europe catches it, and the euro-socialists don't respond, it could crop up soon in another country."

Mesežnikov said he feared that if Smer representatives did not try and find a solution that would return them to the ranks of the PES, and instead decided that membership in the PES was not that important, Smer could begin to move more towards nationalism. If this happened, the analyst said, it would change the entire political atmosphere in Slovakia.

"In the three months since the government was formed, Smer has protected the SNS more vigorously than all Slovak parties in the past 15 years put together. It's understandable, because by presenting the SNS in a more positive light, Smer at the same time defends their participation in the government. But apart from this, Smer itself has moved towards more nationalist positions, as we see in its behavior towards the SMK, or in the way Smer representatives speak about problems between Slovakia and Hungary and with the ethnic Hungarian minority."

On the other hand, Smer MP Dušan Jarjabek said he didn't believe the PES decision would affect the political situation in Slovakia, and that the expulsion was the result of a misunderstanding. "For Smer it has only one result, and that it that certain things must be explained, proven and justified. Only time can heal these wounds within the community of socialists. I believe this whole thing was artificially created by certain MPs."

Jarjabek said he saw no problem in Smer's having formed a coalition with the SNS, because in his opinion it is not an extremist party. He also said that the SMK was "problematic".

"In terms of the content of what he says, Ján Slota is right about a lot of things. Maybe the form of his statements should be different, because it is unpleasant. But in terms of content, you also probably have the feeling that some danger exists here. Whose party is the SMK today? What does it represent? Which state does it belong to?

"Because it sometimes really seems that we regard the SMK as a party active in another country, and that we tolerate this situation."

Mesežnikov said that such charges showed Smer was moving more towards the SNS.

"The SNS demands that the SMK be abolished. In my opinion this very fact makes any discussion of whether the SNS is extremist or not pointless. If a party in a democratic country doubts the right of another democratic party to exist, then I call that extremism.

"The SNS was part of an authoritarian regime [the 1994 to 1998 Mečiar government] that got Slovakia disqualified [from Western integration groupings]. What was done during those years was in conflict with democratic principles.

"The SMK represents the interests of the Hungarian ethnic minority. Unlike the SNS, during its eight years in government [from 1998 to 2006] the SMK helped to stabilize democracy."

Mesežnikov added that he saw elements of authoritarianism in the way Smer's leading officials interpreted the PES decision.

"Rather than concentrating on the real reasons that led the PES to its decision, they looked for false reasons. Given that the PES said the only reason was Smer's coalition with the SNS, it is ridiculous to be looking for other reasons."

The analyst said he was worried by Smer's ever greater search for internal enemies. "The SMK, before that the political opposition, monopolies, the media. I think this is really bad."

In 1997, as a member of the Mečiar government and chairman of the SNS, Slota caused a stir in Slovakia with his unconcealed admiration for Jean-Marie Le Pen, the boss of the French far-right party, the National Front, as well as for the chairman of the Serbian Radical Party, Vojislav Šešelj, who has been indicted by the International War Crimes Tribunal in The Hague.

After inviting the French politician to Slovakia, Slota referred to Le Pen as "the true leader of European national forces, a man who during his entire life has never betrayed the goals that are dear and holy to us all". Slota and Le Pen signed a declaration on cooperation between the SNS and the National Front, with Slota claiming that all national parties in Europe regarded Le Pen's party as the leading force in the fight against "cosmopolitanism and consumerism".

"Ethnic minorities are a tool of cosmopolitans, with which they create military conflicts in order to destroy nations," he said.

Slota visited Belgrade with Vojislav Šešelj and SNS vice-chair Anna Belousovová. He said of his relationship with Šešelj and Le Pen: "Many things connect us. Our basic goal is to create a Europe of nations. We are against Maastricht, and we refuse to be manipulated like herds in the hands of multinational cosmopolitanism."