Fico's break with the European socialists: How Smer's suspension came to pass, and what the future holds

THE SUSPENSION of Smer's membership in the Party of European Socialists (PES) on October 12, following Article 3 of its statutes, was a predictable but radical decision. It was the first time this has occurred in the PES's history as a transnational force at the EU level, one which includes the socialist group in the European Parliament (EP). 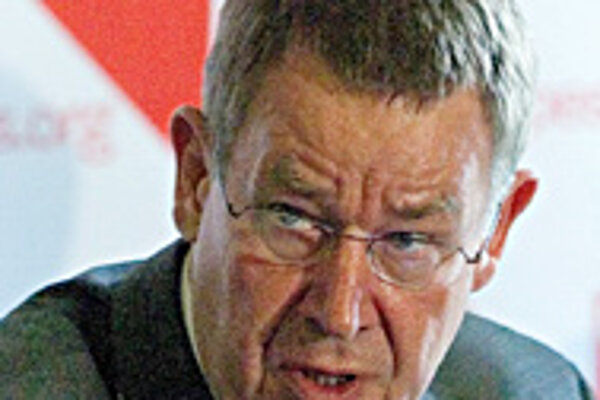 Font size:A-|A+  Comments disabled
THE SUSPENSION of Smer's membership in the Party of European Socialists (PES) on October 12, following Article 3 of its statutes, was a predictable but radical decision. It was the first time this has occurred in the PES's history as a transnational force at the EU level, one which includes the socialist group in the European Parliament (EP). Does this crisis represent a reversal in Slovakia's positive course in external relations since 1998, which saw an end to the country's isolation during the third Mečiar government?

Already at the end of June, PES President Poul Nyrup Rasmussen wrote to Fico immediately after the announcement that a coalition between Fico's Smer, the Movement for a Democratic Slovakia (HZDS) and the Slovak National Party (SNS) would be formed: "The composition of the coalition raises many concerns regarding respect for human rights, in particular the rights of ethnic minorities, as well as commitments to democracy, to the EU and to European values and policies," Rasmussen's letter stated.

It was made clear that the issue was the inclusion in the government of the SNS, whose reputation in European circles has been dominated by its leader Ján Slota's intemperate and over-colourful statements against Hungarians and the Roma. This conflicted with the PES's Declaration of 2001, "For a Modern, Pluralist and Tolerant Europe", which affirmed that "all PES parties adhere to the following principles... to refrain from any form of political alliance or cooperation at all levels with any political party which incites or attempts to stir up racial or ethnic prejudices and racial hatred".

All except 2 of the 33 member parties of the PES supported the October 12 suspension, those being the ČSSD of the neighbouring Czech Republic and Smer itself.

Since Fico gave no indication that he might rethink the composition of his coalition, the suspension was inevitable. Efforts by Fico to try and bypass the issue by arguing pragmatically that it was his government's (social democratic) program which counted most fell on deaf ears. Similarly, his visit to Brussels in September and his last-minute suggestion that the PES monitor Slovakia for a time before deciding proved of no avail. The PES adopted a firm position of principle, and it was clear from various statements by PES figures in the meantime that there was considerable anger over the new Slovak government. This was especially true of Germany's SPD, a leading member in the PES which had used its considerable influence to support Smer's entry to the grouping in the first place.

The PES line is therefore one of unqualified principle. It is also known that political considerations played a part, for as Rasmussen remarked in an interview with a Danish magazine shortly before the PES decision: "We risk losing our legitimacy when criticising the government in Poland or in other countries if we don't keep our own house in order; the pan-European parties have a responsibility to support European values and stand up against populism and nationalism".

What therefore explains Fico's behaviour in the past three months over this issue if the PES position was clear from the start?

Several explanations have been given by political insiders in Bratislava, including from Smer itself, but no clear picture emerges. What then are the possible reasons? First is miscalculation and time pressure. Fico made a decision to press ahead with the government formation as quickly as possible to beat any alternative initiative, even though he was the obvious winner of the election. This restricted efforts to sound out European circles (which was not in any case a high priority). However, it is unlikely that Fico or his party's international secretary did not know the PES line on coalitions with extremist parties, since both had assiduously attended PES and Socialist International (SI) meetings during the process of acquiring their membership.

What may well have happened is that Fico did not take this line seriously enough, partly because he misunderstood mentalities in European socialist circles. He had not made a point of socialising outside official meetings, such as bilaterally with member parties (with exceptions like Czech Prime Minister Jiří Paroubek). Furthermore, Fico's own well-known opportunistic approach to political programs is likely to have influenced him at this point, making him insensitive to European concerns.

Second, some argue he was playing the game of coalition rationality from the start and deliberately risked European socialist wrath. Clearly, Fico saw a coalition with the SNS and Vladimír Mečiar's HZDS as the easiest option given his desire to be a strong prime minister, for both parties were willing to be submissive over the government formation for the sake of their own legitimacy. Otherwise, policy differences (notably over economic affairs with the right-wing SDKÚ) and personality clashes (such as with former PM Mikuláš Dzurinda), not to mention antagonisms between some of the alternative partners, would have made his life difficult.

That Fico considered the SNS a prospective coalition partner after the June election is possible given the SNS's fairly high support in polls in the months before. He notoriously keeps his political cards very close to his chest, so the fact he favoured this controversial option did not seep out during the campaign, even though there were noises in the media about this being a "worst-case scenario". In other words, one should see Fico's driving ambition as the root factor.

There is, of course, a third explanation which really covers both of these arguments. There is overwhelming evidence that Fico, since becoming Smer chairman in 1999, is a politician oriented towards domestic affairs. This is particularly evident in the background of his relations with the PES and the SI. Fico showed no strong interest in European links before the 2002 election, as he made clear in an interview with this author that "it was not a main purpose for now". His chief concern at this time was to build up Smer as a serious force single-handedly, and this he did with consummate skill.

But there were persistent doubts inside the PES over his stand on issues like the death penalty and the Roma. Smer was not regarded at this time as a standard party in Brussels, with Fico seen as more of a populist than a socialist. One former secretary-general of the PES even typed Fico last year as a "left-wing Berlusconi" in a discussion with the author. In short, some reservations towards Fico have remained even since his party joined the PES, and it is reasonable to see its powerful reaction to the new Slovak government as an expression of this underlying unease.

The change came after the 2002 election when Smer acquired a quarter of the seats in the Slovak parliament, while other parties of the left remained outside and were reduced to the political fringe. This gave Fico his strategic opportunity. Eventually, he achieved the unification of the left much on his own terms, with the PES, SI and parties like the SPD playing a facilitating role. It was also clear that the PES' reservations about Fico were counter-balanced by the fact he now headed the one strong party of the left with growing prospects for power. Fico therefore made a bid for European socialist approval for electoral purposes (to impress a largely pro-European Slovak electorate) and to legitimise his party at the international level. In the 2006 election, unlike that in 2002, Smer (now with "Social Democracy" as its sub-title) made full play with its new European credentials.

What does the future hold now that Smer lacks European party allies? The immediate consequences are quite serious in terms of European networking and government influence in the EU. As Rasmussen made clear in July, Smer will forfeit the right to participate in PES summits of party leaders which aim to coordinate positions just before European Council meetings. Executive meetings, congresses and policy seminars will also be closed to Smer.

In effect, this amounts to a ban on Fico, although governmental relations with other EU states will clearly continue to operate. This line accords with the advice inside the PES that such a sanction is easier to apply at the party than at the state level, a lesson learned from the messy conduct of the sanctions against Austria in 2000 because Joerg Haider's Freedom Party was included in the new government.

Logically, the PES ban should have been extended to the three Smer MEPs, but this is apparently not the case. This may have to do with the fact that one of them, Monika Beňová, took an independent critical position on Fico's coalition choice in July, while all three expressed a wish to stay in the socialist group even if Smer were suspended from the PES. Evidently, a rift has occurred between them and the home party.

In the end, much depends on Fico himself - which is obvious given he is the creator of Smer and now enjoys a powerful position as prime minister. One can think of many previous examples of politicians who followed a domestic path essentially for electoral reasons, but then once government leaders had to embrace external relations (all the more if coming from an EU member state), with some becoming enthusiastic. There are some signs of this happening with Fico with his recent speech to the UN General Assembly and his new interest in Southeast Asian affairs (including a meeting with the King of Cambodia), not to mention his visit to Iraq when he famously returned home in military fatigues. An important aspect to watch is how his relationship with Foreign Minister Ján Kubiš develops and whether, somewhat contrary to his instincts as a loner, he acquires an unfamiliar habit of listening regularly to informed advice on European and foreign policy.

Fico has made a poor start in relations with the EU (magnified by tense relations with Hungary), and now he will be hamstrung by his exclusion from the PES. Does this crisis simply reflect impatience and inexperience on the part of Slovakia's new rulers, or will there be a steep learning curve? Will, more pessimistically, relations with the EU revert to the difficult situation of the mid-1990s more than up to now? The evidence is mixed, and the jury is very much out on this question.

- Geoffrey Pridham is professor of European politics at Bristol University in the UK.