The stories behind the numbers

IN HIS CHILDHOOD, Father Marián Kuffa idolized Winnetou, the brave "Apache Knight" from Karl May novels, who used his swift horse and double-barrel rifle in the name of compassion for all people. 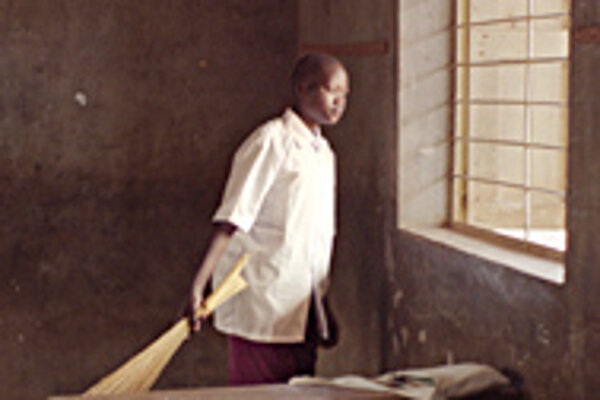 Font size:A-|A+  Comments disabled
IN HIS CHILDHOOD, Father Marián Kuffa idolized Winnetou, the brave "Apache Knight" from Karl May novels, who used his swift horse and double-barrel rifle in the name of compassion for all people.

These days, Father Kuffa runs the Catholic Institute of High Priests in Žakovce, near Kežmarok, which provides housing and employment to approximately 100 men previously homeless or ex-convicts. As well as farming the institute's land, the men build houses in nearby areas to accomodate single parents with children. And when Father Kuffa isn't leading his congregation, or tending to the residents of the institute's division for the disabled, he can be found working alongside the men, as an equal.

This is the story behind Soul Trader (Podnikateľ s Dušami), an inspiring documentary by Slovak director Iva Kúšiková that will be shown in the Cultural Crossroads and Conflicts category of the 7th annual One World International Documentary Film Festival in Bratislava.

The festival takes place October 25-29 at the Charlie Centrum, among four other local cinemas.

One World is part of the Association of Human Rights Festivals, which organizes 17 documentary film festivals around the world annually.

The Bratislava chapter was put together by People in Peril (Človek v ohrození), a highly respected Slovak NGO founded during the NATO-led war in Kosovo, and is supported by the Slovenská Sporiteľňa Foundation.

"We want this festival to present comprehensive and balanced information that leads to a deep understanding of how diverse socio-political problems are, in reality, connected," People in Peril wrote in its press release. "Our desire is also to educate people in cross-cultural communication and the defense of human rights, so they can bear witness to infrigements throughout history and in the present, and combat all forms of extremism."

Like Soul Trader, several of the films have inspirational stories. Shadya, from the festival's Women Today category, is about a spirited Palestinian girl whose open-minded father supports her quest to become World Karate Champion. But incidents while on the Israeli National Team make Shadya feel like an outsider, causing an identity crisis and a retreat into her society's traditional female roles. Shadya ultimately finds it impossible to object when, at the peak of her career, her family arranges a marriage for her that will mean the end of her athletic aspirations.

The New York Times called Shadya a "compassionate, painfully honest exploration of the evolution of a young Israeli-Arab woman with feminist ideals in a male-dominated culture set against the backdrop of the Palestinian-Israeli conflict."

But most of One World's documentaries will focus on the regrettable and harsh reality that gross human rights violations are committed around the world every day.

"We are not really aware of the human rights violations we are supposed to be aware of because ... the mainstream media are structured in a way that keeps everything flowing, and, somehow, we stop realizing what the news is telling us," Igor Blaževič, the director of One World Prague, told Czech Radio in 2004. "We switch to another channel, get something out of the refrigerator, go to the bathroom, and then come back and see another piece on the Israeli-Palestinian conflict, Iraq, and so on, and we don't truly comprehend or grasp the reality of what the news is telling us."

The Chechen Restrospective is a whole category of documentaries dedicated to exposing high-level corruption in Russia, and the war in Chechnya, the origins of which date back long enough to have been mentioned in stories by Tolstoy.

In Coca: The Dove from Chechnya (Coca: Die Taube aus Tschetschenien), Swiss filmmaker Eric Bergkraut introduces Zainap Gashaeva, a Chechen woman nicknamed Coca (dove). Coca was born in exile in Kazahstan, where she raised four children and became a businesswoman. Since 1994, she and a network of partners have set up a database that tracks disappearances during the war in Chechnya, and have been smuggling videotapes and interviews out to the West.

But instead of trying to justify the violence either side has committed - as one film reviewer wrote, "Russian President Putin can easily point out the vicious track record of warlord Shamil Basayev, who has claimed responsibility for the deadly school hostage taking on September 1, 2004 in southern Russia that killed more than 330 people, ... [as well as] airplane downings, suicide bombings and hostage takings that have resulted in hundreds of deaths since 1995" - Coca aims only to make public the massive scale and true nature of the conflict. According to her estimates, up to 30 percent of the Chechen population may have been killed in the last ten years.

The subject of Chechnya takes on even more poignancy this year in light of the recent murder of Anna Politkovskaya, the award-winning Russian journalist acclaimed for her intrepid coverage of the conflict's brutality.

"I would say Politkovskaya's murder is a huge tragedy for Russia, especially for the mass media and civil society. No matter who murdered her, it is a warning signal for free media and those who criticize the Russian power structure. She was one of the last who was unafraid to raise her voice against Putin's policy in Chechnya and Russia's development towards totalitarianism and fascism," Kerstin Nickig, whose documentary Dear Muslim (Lieber Muslim) will show in the festival's Migrant Odyssey category, commented for The Slovak Spectator.

A number of the films in the You Have the Right to Know category document the civil war in the former Yugoslavia, such as A Bridge over Drina (Most na Drine) by Xavier Lukomski and Beyond Reasonable Doubt (Nad všetku pochybnosť), by Mina Vidakovic.

Beyond Reasonable Doubt revisits Srebrenica, the Bosnian town that in July 1995, became the site of the worst massacre of civilians since World War II. The film contains harrowing testimony from survivors, witnesses and the military units involved, and even footage of General Ratko Mladič and former President Slobodan Miloševič.

It opens with the words of Telford Taylor, the lead prosecutor of dozens of Nazis at the Nuremburg Trials:

"It is important to determine those incredible facts on the basis of clear and public evidence, so that no one could ever doubt that those were indeed the facts, rather than fabrications."

Ahadi was born in Azerbaijan and trained as a soldier during the Iran-Iraq war (1980-88), but escaped to Germany at age 12. Stoltz was born in Bonn, Germany and moved to Namibia when he was 13, where he lived during the civil war that ravaged the country during the early 1980s.

One of the children they profile is Francis, a 12-year-old who was forced to watch two boys who refused to kill be executed with machetes. He escaped the rebels, but can't go back home because just having been in the militia means he'd be labeled a murderer and disowned.

Another is Jennifer, a fourteen-year-old who worked as a maid for an LRA leader before being trained to kill. Having also fled, she's now haunted by visions of her victims.

And 13-year-old Kilama, who can recall the gruesome details of stabbing his victims to death. In a cruel twist of fate, he, like Francis and many other child soldiers around the world, suffers the trauma of being viewed with fear and contempt by his own family.

People in Peril hopes such a flood of human stories will get audience members talking about human rights and perhaps even eager to take action.

Therefore, it has organized a series of discussions to accompany the festival in which distinguished international guests will contribute their personal experience and expertise.

Taghreed Elsanhouri, a Sudanese filmmaker who grew up in the United Kingdom, is one of the featured speakers. Her debut documentary All About Darfur will show at the One World Festival on October 27 and 28.

"I made All about Darfur because I was frustrated with the quality of reporting about the crisis in Darfur and wanted to hear Sudanese people's thoughts and feelings in their own words," Ms. Elsanhouri told The Slovak Spectator. "In particular, I feel the Arab/African dichotomy in the Western press oversimplifies the crisis and fails to acknowledge the economic and political factors, and reduces the conflict to the very simplistic and inaccurate issue of race.

"I would like audiences to come away with an awareness of the broader historical context of the crisis and the moral and political complexities about the issue of intervention. Also, in making the film I wanted to pay tribute to the courage and dignified spirit of people in the midst of war."